Apple and Samsung continue to dominate, but Huawei and ZTE are starting to surge

Apple and Samsung continue to dominate the world's smartphone market, but emerging Chinese companies are starting to climb the ranks. That's according to IDC's latest report on global smartphone shipments for Q4 2012, released earlier this week. The market research firm's data show that China's leading manufacturers, Huawei and ZTE, enjoyed robust year-on-year growth in 2012, placing them among the world's top five handset makers. Huawei's market share jumped by 89.5 percent over the year — higher than any other smartphone maker — while ZTE's share grew by 48.4 percent.

Huawei is now ranked third among smartphone vendors with 10.8 million units shipped last quarter, marking the first time it has ever cracked the top five. ZTE dropped one spot to number five, on the strength of 9.5 million quarterly shipments. Their rise has displaced both LG and HTC, which have seen their shares gradually decline in recent quarters.

Both, however, still trail Samsung and Apple by a significant margin. Korea-based Samsung led IDC's rankings with 63.7 million Q4 shipments last year, good for a 29 percent market share. Over the year, the company's share has increased by an impressive 76 percent. Apple, meanwhile, saw its share jump by just 29.2 percent over the year, but still came in second last quarter, with 47.8 million shipments and a 21.8 percent market share — nearly 17 percent higher than third-ranked Huawei. Rounding out the top five is fourth-place Sony, which shipped 9.8 million smartphones last quarter.

China's leaders have turned their attention to higher-end devices

But the rise of China's industry remains the most notable takeaway from IDC's report, and something that could represent a major inflection point in the world's market.

"The fact that Huawei and ZTE now find themselves among the Top 5 smartphone vendors marks a significant shift for the global market," said IDC research manager Ramon Llamas. "Both companies have grown volumes by focusing on the mass market, but in recent quarters they have turned their attention toward higher-end devices. In addition, both companies have pushed the envelope in terms of industrial design with larger displays and smaller form factors, as well as innovative applications and experiences."

Last quarter marked the first time that ZTE shipped more smartphones than feature phones, reflecting a strategy that the Chinese government hopes to replicate across its entire electronics sector. Earlier this week, the country released a new set of objectives for its leading tech manufacturers, encouraging them to more tightly integrate supply chains and to produce higher-end finished products.

Huawei and ZTE's growth is even more impressive in light of their struggles to crack the US market. Both companies came under intense scrutiny last year, after a government report labeled them a national security threat, citing close ties with the Chinese government. Thus far, however, it doesn't seem to have had an effect on their bottom lines. Earlier this week, Huawei announced that its net profits grew by 33 percent last year, despite its ongoing stateside controversy. 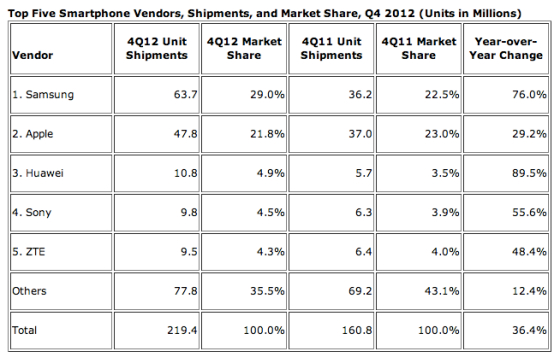