Infobar A02: the latest in a classic series of designer Japanese phones with a radical UI

Infobar A02: the latest in a classic series of designer Japanese phones with a radical UI

Carrier bloatware and overwrought manufacturer skins are two of the banes of Android users in the US, but that's not always the case all around the world. In Japan, for example, KDDI's Infobar series has been pushing the boundaries of phone design for ten years now, and this week the carrier announced its latest entry — the Infobar A02. It's an HTC-made smartphone with beautiful industrial design and a radical overhaul of Android 4.1.

It shares a similar skin to predecessors such as the C01, known as iida UI; first seen on the A01 in early 2011, it may well have provided inspiration for Windows Phone 8 with its vertically scrolling home screen of different-sized tiles. The Infobar A02 uses version 2.0 of iida UI, which doesn't look like a radical overhaul but offers some unique animations and sounds provided by Japanese pop legend Cornelius. Unusual as it may seem to most people in the West, iida UI is a carrier customization that is actually viewed by customers as a genuine selling point. You can check it out for yourself by viewing the video below or with a virtual demo on KDDI's site.

The A02 is no slouch on a technical level, either: it has a 4.7-inch 720p display, a 1.5GHz quad-core Snapdragon S4 Pro processor, an 8-megapixel camera, and it runs on KDDI's new LTE network that came into operation with the launch of the iPhone 5. You'll also find the usual array of Japan-focused features such as infrared data transfer, o-saifu keitai mobile wallet, and a 1seg TV tuner.

But the most attractive thing about the hardware is its industrial design from the renowned Naoto Fukasawa — known for products such as Muji's wall-mounted CD player — who has brought the decade-old Infobar styling (see below) right up to date in a modern smartphone form. The frame is made from aluminium that gently curves into the screen's glass, which KDDI describes as "functionally minimal product design." The A02 is available in bright blue and white models, but we think the classic nishikigoi (colored carp) palette of red, mauve, and cream is the way to go. The phone launches next month, and we'll do our best to get a closer look at a later date. 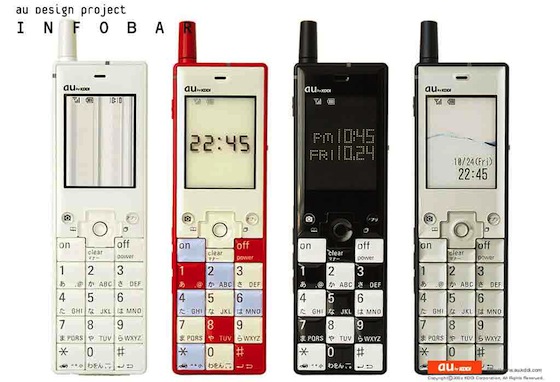