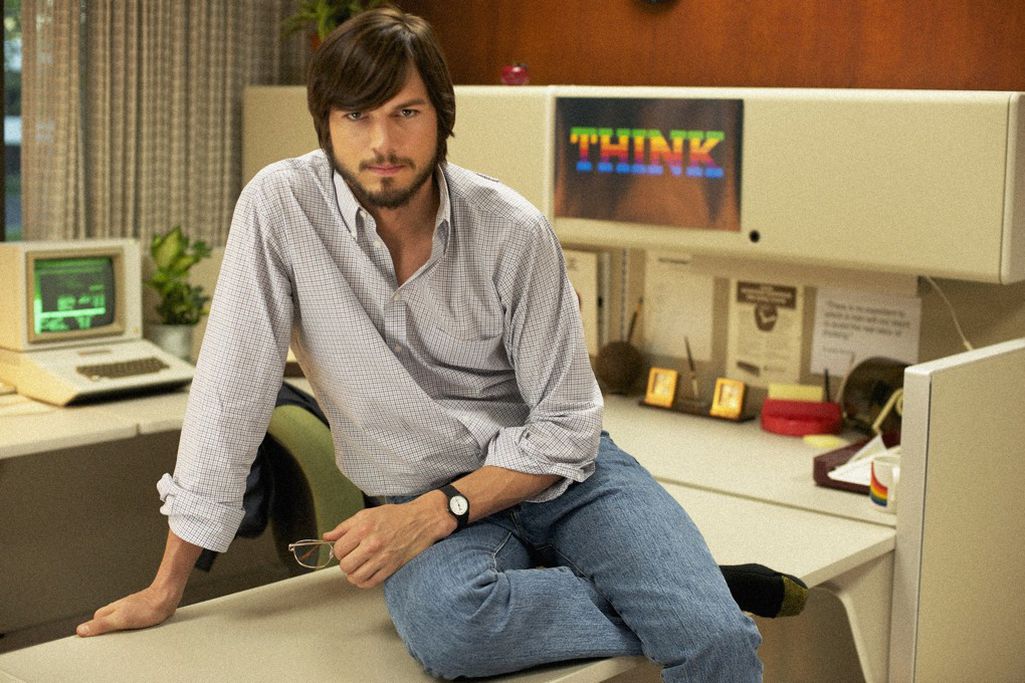 This movie was reviewed at the 2013 Sundance Film Festival.

Cupertino, 1980. Steve Jobs is giving an impassioned motivational speech to a small team working on Apple’s Lisa. "It’s social status. It’s social currency," he says. His voice is deliberate, paced to emphasize the most emotionally-driven words. On the whiteboard behind him it reads "File | Edit | Page Layout | Format." He asks the team how many typefaces are in Lisa, who in turn respond that it was deemed a less pressing issue. This isn’t the answer Jobs expected.

"Everything… is a pressing issue," he says, his once-inspirational demeanor quickly escalating into a quiet rage. One of the programmers continues to disagree, arguing that it was a necessary compromise. It’s at this point that Jobs’ temper boils over. He shouts at the top of his lungs, fires the programmer — "Apple’s best," according to Bill Atkinson — but that doesn’t matter since he clearly lacks the vision or passion. The programmer stands there just half a second too long. The fury escalates further. “NO! I ALREADY FIRED YOU! WHY ARE YOU STILL HERE?” 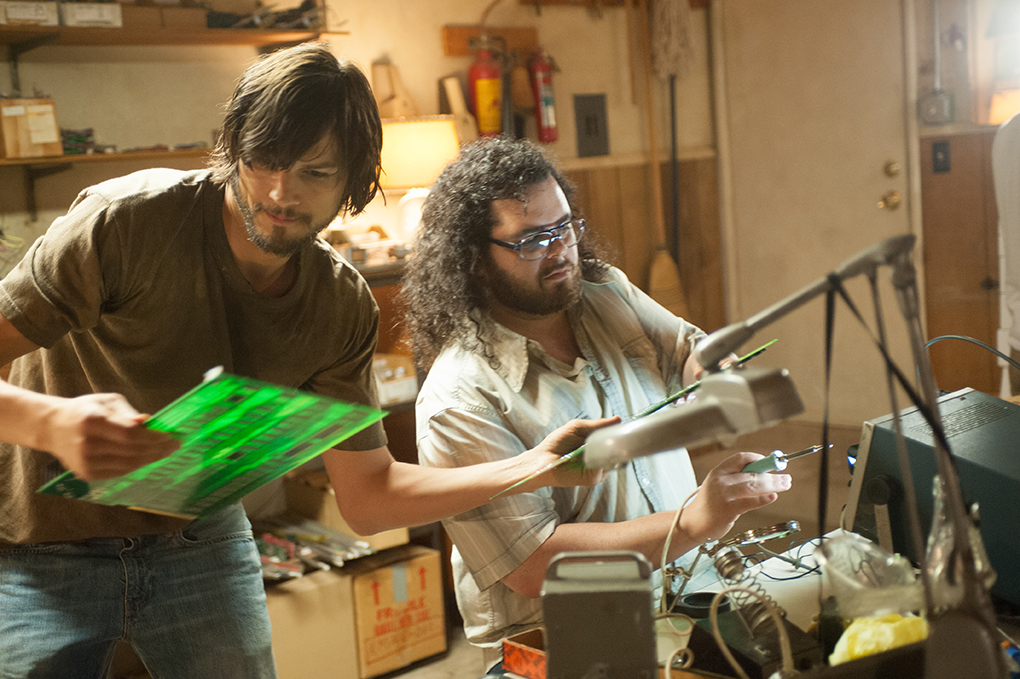 It’s a scene that encapsulates the essence of Jobs the man — and indeed, Jobs the movie. It’s a film that’s been under intense public scrutiny since being announced six months after the legendary Apple co-founder passed away — and one month before Sony Pictures hired The Social Network scribe Aaron Sorkin to write a script based on Walter Isaacson’s official biography. Jobs is an independent film at heart and retains some of that feel throughout — which makes its premiere at this year’s Sundance Film Festival all the more appropriate — to uproarious applause, it’s worth noting. It’s not quite the Academy Award-winning epic fans might be hoping for, but at the same time, it’s far from being the disaster you might’ve feared.

It’s not quite the Academy Award-winning epic fans might be hoping for, but it's far from a disaster

The movie opens at a 2001 Apple town hall meeting, where Jobs introduces the iPod to much fanfare. (What happens next, the crowd of rapturous employees clapping furiously in slow motion while the music crescendos, represents the worst of Jobs — but we’ll get to that later.) That scene represents the endpoint of the movie before jumping back to 1976. From there, it more or less follows chronologically, skipping ahead from time to time after pivotal moments: building Apple I devices in the garage, convincing Mike Markkula to invest, the debut of Ridley Scott’s legendary "1984" commercial, and the exodus of Jobs, to name just a few.

Director Joshua Michael Stern (Swing Vote) and writer Matt Whiteley have packed a lot into the 122-minute film, so much so that it moves past scenes at breakneck pace. There is no mention of Xerox PARC where Apple got its graphical UI, and the Bill Gates relationship is nothing more than a one-sided phone call of Jobs yelling into the receiver. But there’s still plenty there — writer Matt Whiteley says the script started at a very lengthy 256 pages and "evolved during production." There's arguably too much, especially as the movie drags a bit near the second half.

The film doesn’t shy away from Jobs’s unflattering traits — including his resentment towards longtime girlfriend and his rejection of their daughter, Lisa. (The film later shows a brief scene where Jobs is cheerfully trying to wake Lisa up, one of the many quieter scenes that exposes the larger canon.) Jobs was notoriously prideful and arrogant, and that characterization is made abundantly clear.

Our interview with Ashton Kutcher from July 25th's On The Verge 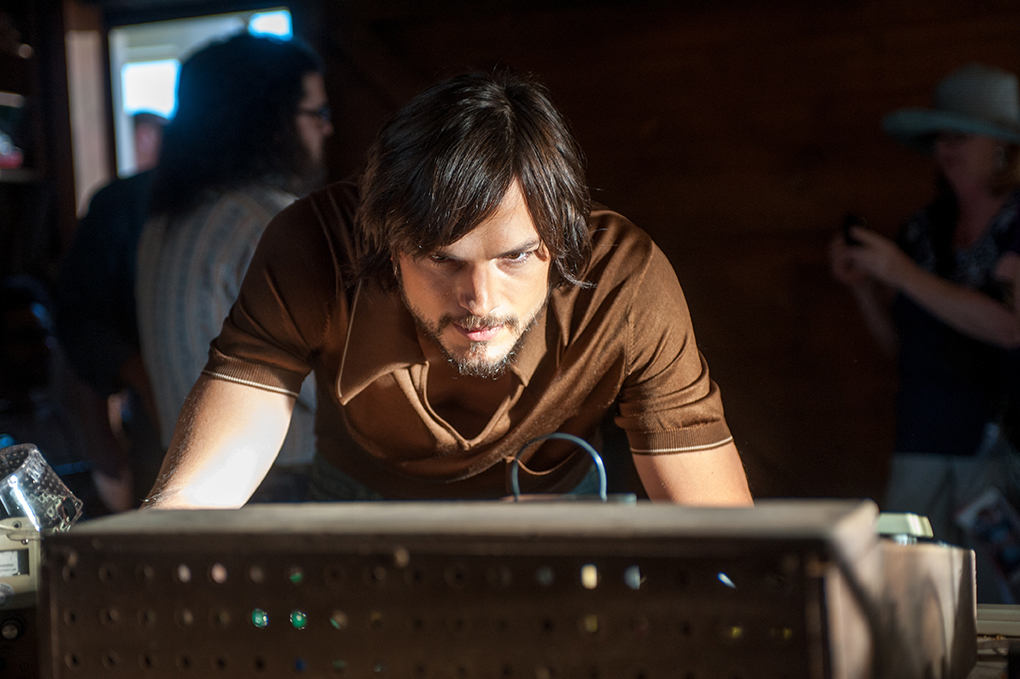 Ashton Kutcher said he watched "hundreds of hours of footage [and] met with several of Jobs’s friends" in preparation for the role, and to his credit, it shows. From that first town hall scene, Kutcher nails the mannerisms of Jobs the Orator. The pacing. The hand gestures. The unique quirks in his speech pattern. It takes a second to adjust to Kutcher’s lower-pitched voice, but after that, he captures Jobs’s trademark showmanship. And for the most part, he captures the look of Jobs, as well — albeit one that’s always in peak physical condition.

It’s Jobs the Businessman where Kutcher delivers a surprisingly effective performance. When Jobs first negotiates with Paul Terrell over stocking the Apple I, there’s drive but clear inexperience with such situations. Later when he negotiates with Mike Markkula (Dermot Mulroney), Apple’s first major investor, Jobs is more self-assured and business-savvy. By the time Apple is preparing to go public, we see Jobs has fully transformed into a ruthless businessman. Kutcher plays Jobs with no remorse as he denies Daniel Kottke — one of his oldest friends and earliest employees of Apple — any stock options in the company because "any low grade technician can do his job."

Then there’s Jobs the Tyrant, who won’t hesitate to blow up and scream at those he thinks aren’t pulling their weight. It’s the Jobs we’ve never seen publicly, but the stories are shared like fables. Even when confronted by the board of directors, Kutcher portrays Jobs as a leaking bottle of pure rage — his foot feverishly tapping and his eye almost quivering as he tries to maintain some self-control. As Jobs’s boss at Atari (Al Alcorn, played by David Denman) puts it early on in the movie, "You’re good. You’re damn good. But you’re an asshole."

Kutcher’s portrayal of Jobs the Emotional, however, isn’t quite up to par. When Kutcher tears up, or chokes on his words, it never feels right or convincing. Some of that blame goes to Kutcher. Some of the blame goes to the script, which at times is too blunt and obvious to the point of being awkward. (At one point, Jobs blurts out to Woz, "I need my independence," emphasizing that he doesn’t work well with others — something we’ve been shown more elegantly in every other scene of the movie.) It’s also the original score, however, which adds to the heavy-handedness. At times, Jobs tries too hard to sell a dramatic moment instead of just letting it happen. It doesn’t work, and it just comes across as awkward.

Thankfully, though, the (slight) majority of the film is Jobs being ruthless, cold, angry, or giving a motivational speech — all of which plays to Kutcher’s strengths here. It isn’t perfect by any means, and on one too many occasions he slips into that familiar "Ashton Kutcher" voice (most notably in the clip released just before the premiere). 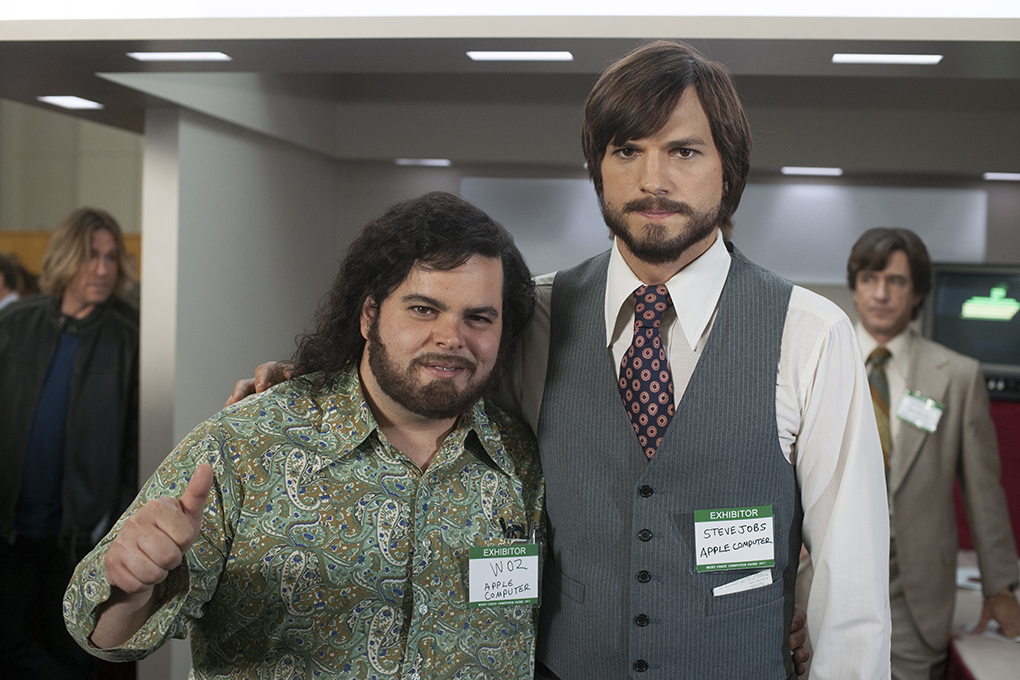 The production and costume design are astounding, and it’s not just Kutcher wearing nearly every iconic Jobs outfit (the suspenders, the bowtie, the turtleneck, etc) throughout the film. The filmmakers were able to use Jobs’s childhood home — the legendary "garage" where Apple started — and it really sells the first third of the movie to see it around the iconic location. The offices and fashion play to each era — big glasses, bigger hair, slacks worn high — even if it isn’t necessarily what the individual actually wore in real life. Woz may never have worn that tie, but someone in the 70s did.

The movie is littered with small details of lore that should make Apple fanatics happy. The pirate flag hanging in the Macintosh offices. Ousted CEO Gil Amelio uttering his famous quote, "Apple is like a ship, that ship is loaded with treasure…" The "sugared water" line that was used to woo John Sculley. Jobs casually lying to Woz about how much he was getting paid by Atari for a special project (he told Woz $700, when in fact it was $5,000)… so on and so forth. 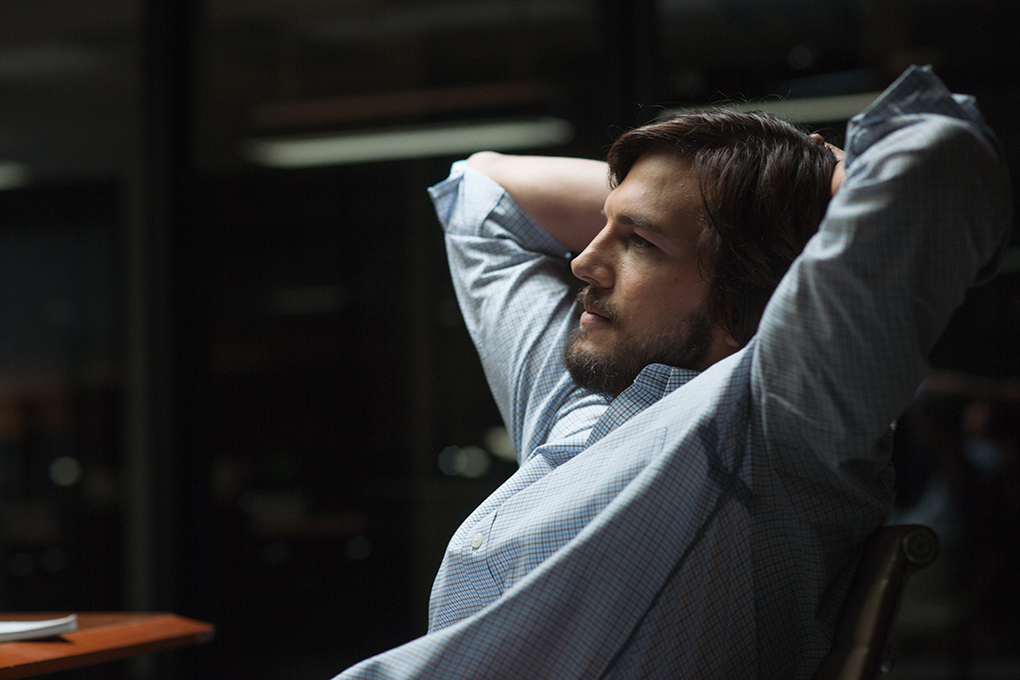 Where Jobs shines is these simple moments that happen without dramatic emphasis. At one point Jobs is listening to a CD player that skips and he just grumbles before finishing his thought; it’s a clear reference to the iPod’s inception, but here it’s just a small blip in the middle of another conversation. It's a shame not more of the film was built on this idea.

This isn’t a story about relationships, because relationship implies some duality. All other characters have been heavily simplified from their real-life personas. "Archetypes" would be putting it nicely; they really only serve as foils to highlight Jobs’s various personality traits. Apple co-founder Steve Wozniak (played by The Book of Mormon’s Josh Gad) comes across less as a goofy prankster and more a insecure friend that later becomes disillusioned by Jobs’s cold demeanor. Jony Ive (Giles Matthey, looking more like a One Direction cast member than history recalls) appears later in the film and provides us with the most awkward "O Captain My Captain"-esque speech welcoming Jobs back to Apple. The only other character to get significant screen time is Markkula, Jobs’s longtime ally who later sided with CEO John Sculley when Jobs was ousted 1985 — his raison d'etre is to represents Jobs’s ability to hold a grudge. 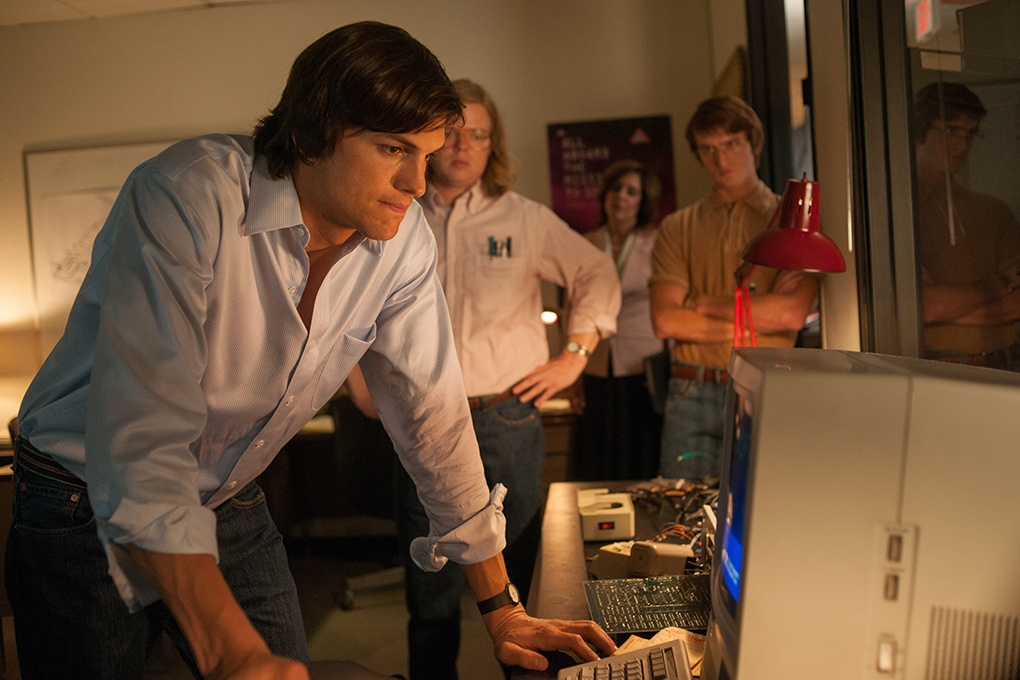 In the end, the only character that matters here is Jobs himself — and even then, only when he’s at Apple. The film spends just a few minutes of its two-hour runtime addressing the 12 years when Jobs wasn’t at the company — including a blink-and-you’ll-miss-it look at the NeXT Computer and not a single mention of Pixar — before jumping ahead to his return in 1997.

As expected, there are some liberties taken with Apple’s story and even / especially the representation of some characters (more backstory care of Woz himself) — but the emotional resonance of Steve Jobs himself is convincing. It’s not trying for revisionist history — but it is "The World According to Jobs," where he resides as the emotional center and all characters interact almost exclusively with him. It’s also not some greater parable about the human spirit in the way that The Social Network strived for (and largely succeeded). Jobs is a point-A-to-point-B story about a uniquely innovative thinker and ruthless businessman — one that had a notable and meaningful impact on the world. It’s a good film, but it’s also very "safe" — a familiar story that doesn’t try for a bigger picture. It’s not destined to be the Great Jobs Biopic — and yes, there will be many in the years and decades to come — but it’s worth taking a chance on for Kutcher’s performance.

Ross Miller has dreaded writing this review, knowing how invested the community may (or may not) be in this film, months before they even have the possibility of seeing it first-hand. Jobs’s theatrical release is set for August 16th. Full disclosure: Ashton Kutcher is on Vox Media's Board of Advisors but that has never gotten us into cool parties, and we still won't forgive him for New Year's Eve, No Strings Attached, What Happens in Vegas, Guess Who, My Boss's Daughter, or Just Married.