Share All sharing options for: Iran fires monkey into space

Media outlets in Tehran today are reporting that the Iranian government has successfully launched a monkey into space. According to the AFP, the monkey was launched inside a capsule to an altitude of 75 miles before returning back to earth unscathed.

"Iran successfully launched a capsule, codenamed Pishgam (Pioneer), containing a monkey and recovered the shipment on the ground intact," the defense ministry's aerospace department said in a statement. The department added that the animal came back "alive" after completing its sub-orbital flight.

Iran's monkey is alive and well

Today's announcement comes two years after Iran successfully launched a ten-foot research rocket carrying a mouse, two turtles, and several worms. Officials announced plans to put a monkey in space earlier this month, as part of its ongoing mission to send a human to space by 2020, and to have an astronaut on the moon by 2025. Iran launched its first domestically built satellite into orbit in February 2009.

The country reportedly failed on its first attempt to launch a rhesus monkey in 2011. At the time, officials were hoping to fire the monkey into orbit inside a Kavoshgar-5 rocket, though the mission was never widely publicized, and an explanation for its failure was never provided. Earlier this month, Iranian Space Agency head Hamid Fazeli told Mehr News that Iran was hoping to use monkeys to test the safety and feasibility of human spaceflight. "Monkeys have similarities to humans, so with them in space, we can examine human factors in space," Fazeli said.

Tehran's space program has raised concerns in the West

President Mahmoud Ahmadinejad has put an emphasis on the development of Iranian space technology in recent years, raising concerns among some in the West who fear that the program could be used to enhance Tehran's military capabilities. "The scientific arena is where we could defeat the (West's) domination," Ahmadinejad said on live TV in 2010, following the successful launch of a Kavoshgar-3 rocket carrying a mouse and other animals.

Critics fear that Iran could use its long-range ballistic technology to launch satellites that could be used to trigger atomic warheads. The Islamic republic, however, has vehemently denied allegations that its space and nuclear programs are being deployed for military purposes.

At the dawn of the space race, both the US and USSR would frequently send animals into space in order to test the safety of human spaceflight. The first monkey to enter orbit was a rhesus named Albert I, who rode into space aboard a US military V-2 rocket in 1948, but tragically suffocated and died during the flight.

Update: Iran has released images of the monkey. Warning, you may find the images upsetting. 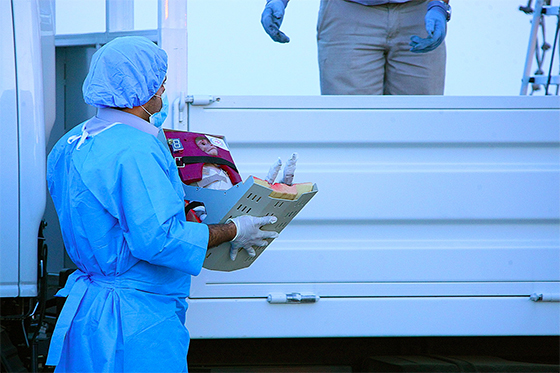