HP is preparing to launch its first entry into the Chromebook marketplace, if a PDF found on its site can be believed. According to this listing, HP's currently-unannounced Pavilion Chromebook will feature a 1.1GHz Celeron processor, 2GB of RAM, a 16GB solid-state drive, and a 14-inch, 1366 x 768 display. That display alone makes HP's Chromebook a bit of an oddity — current models from Lenovo, Samsung, and Acer feature 11.6-inch screens, though they run at the same resolution as HP's model. Besides that screen, there doesn't appear to be much to differentiate HP's model from the currently-available Chromebooks — it has the same processor as Acer's model and the same RAM and storage as the Samsung. Unfortunately, HP is only claiming a relatively short 4 hours and 15 minutes of battery life — far behind the nearly seven hours afforded by Samsung's Chromebook. 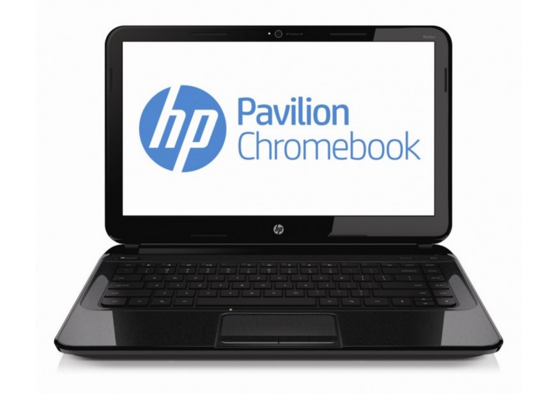 While we're a bit concerned that HP's Celeron processor will cause its Chromebook to heat up more and have worse battery life than other options, the real key here is going to be how the computer feels in use — if the keyboard, trackpad, and screen don't perform well, this machine's prospects won't be good. However, we'll have to get our hands on it to find out for sure. Assuming HP prices this device right, it'll be the latest volley in Google's attacks against Microsoft — HP is one of the biggest Windows clients Microsoft has, just like Lenovo, so any strategy shift like this will likely get Microsoft's attention. We're reaching out to HP to find out any details on the Pavilion Chromebook, including price and availability, and will update this post with any new details.

Update: HP responded to our request with a simple "no comment," but we also noticed that the PDF has an Ad Embargo date of February 17th of this year — we expect we'll hear the full story right around then.

Update 2: AnandTech notes that HP prematurely listed the Chromebook at a price of $329.99.