Who can stop robocalls? FTC tries to crowdsource a solution but falls flat

Who can stop robocalls? FTC tries to crowdsource a solution but falls flat

Technology is giving telemarketers an advantage over law enforcement

I’ve been living with just a cell phone my entire adult life, but earlier this year I decided to try an experiment and installed a landline from Time Warner Cable, with the coveted 212 Manhattan area code for $20 a month.

"Rachel" from "cardholder services," Tom with "Home Security," and other pre-recorded voices promising debt relief, low interest rates, and auto warranties called me at least once a day. I added my number to the Do Not Call registry, which had zero effect. I canceled service after a month. I was getting more calls from robots than people.

I was getting more calls from robots than people

The Federal Trade Commission is taking this annoying, persistent problem very seriously. When talking to carriers and other private entities including Google failed to produce a solution, the agency thought it would be worth it to try crowdsourcing. In October, the FTC announced a $50,000 prize for the best technological solution, in order to, as head of the Bureau of Consumer Protection David Vladeck put it, "tap into the genius and technological expertise among the public."

The contest is now closed, so The Verge paged through the FTC’s submission gallery looking for innovative solutions to the robocall problem, hoping to find some omnipotent dongle or some ultra-clever smartphone app that only the genius and technological expertise of the public could come up with. This being the kind of issue that requires some creativity and technical chops, the contest seemed like a great idea. The FTC published its complaint data to help contestants and got lots of media attention. By the time it closed on January 18, the contest drew more than 500 eligible submissions from individuals and small teams.

Unfortunately, most of the actual submissions fell short of 'genius'

Unfortunately, most of the actual submissions fell short of genius. The contest didn’t seem to attract the Silicon Valley hacker, App Store millionaire types who might have the ability to design an elegant solution. Instead, it drew a lot of ordinary citizens who are just annoyed with robocalls.

The submission gallery is littered with half-serious proposals ("I don't think technology is the answer, it created the problem. Good old common sense is") and proposals that betrayed ignorance of the basic technical challenges ("Simply buy an answering machine to record incoming calls [proof will be required that unwanted robo calls were placed] 2. FTD must impose monitary sanctions for each and every robocall placed [sic]") as well as incoherent ramblings and dubious claims. Many proposals are lacking in details and riddled with typos.

After the total junk proposals, there’s a layer of duplicative ideas. Popular ideas included some version of an audio CAPTCHA, where a caller would be asked to dial a certain sequence or input "the name of person with whom the caller wishes to speak" before the call would go through. People also suggested using voice recognition to detect whether a call is a robocall. Without considering whether this would be technically feasible, this proposal would eliminate legitimate robocalls from your pharmacy or school (and also seems pointless since people can identify a robocall pretty much instantly without any assistance). 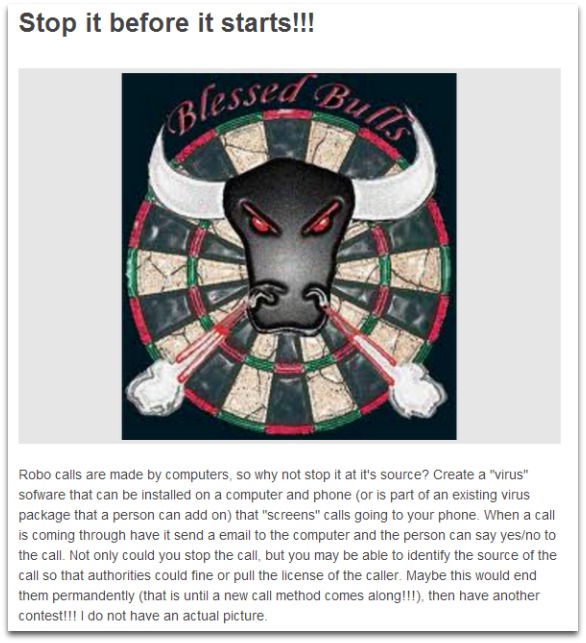 One submission, "Stop it before it starts," from Patricia F.

The most common proposal was to dial a number to report a robocaller, which the FTC is considering — it just requires cooperation from carriers who would have to agree to a single standard, then agree to a mechanism for transferring the data to the government. Solutions that require cryptography or some kind of call authentication or central database would also require the carriers’ full participation.

Author and sociologist James B. Rule submitted an idea that he’d once written up as an editorial in the New York Times, a proposal that suggested consumers have the choice to only accept "bonded" calls, in which the caller agrees to compensate the recipient if the latter deems the call a bother. Dr. Rule assumed the idea would be feasible since it basically imitates a 1-900 number. His proposal, "The Personal Payphone," says it would require "only modest alteration of existing technology." However, he admitted he hadn’t vetted the scheme with a technical expert. "I don't have the expertise in the technical side of telecommunications to illuminate these issues more deeply," he said in an email.

Actually, the FTC was hoping for technical details. We asked the agency to point us to some specific proposals that were innovative, or even just viable, but a rep declined. There are still some submissions pending eligibility review that have not been posted online yet, she said, adding that maybe the more serious proposals were submitted closer to the deadline. The winner will not be announced until April 15.

It may be that the robocall problem is simply too tough to crowdsource. The legacy infrastructure of the public switch telephone network, and the fact that carriers and government must coordinate, make it extremely difficult to combat.

Furthermore, history has shown that crowdsourced solutions to technical challenges can fall through even if they attract the right type of submissions: Netflix never used that winning code in its famous million-dollar contest to improve its recommendations algorithm. (The stunt made for great publicity, though.)

The FTC has been pursuing robocallers ever since the national Do Not Call Registry went into effect in 2003, prosecuting 101 cases against 226 individuals that resulted in $69 million in penalties. In 2010, the agency put a stop to one operation that had blasted out 2.5 billion calls in 18 months, or 52 calls a second.

The number of complaints about pre-recorded sales calls, which are illegal in the US unless the recipient explicitly opts in, has more than doubled since 2010. The FTC now gets more than 200,000 complaints a month about robocalls. Fraudulent robocalling is up 30 percent over last year, according to research done by Pindrop Security. Most of these calls are from scammers offering, say, free trips to Disneyworld — as long as you hand over your credit card information.

The FTC held a summit on the topic ("Robocalls: All the Rage") at which experts from government, private carriers, and the tech sector convened to discuss the challenges of eliminating robocalls.

"It is a tough problem, or somebody would have solved it," said Kati Daffan, a staff attorney at the FTC’s Bureau of Consumer Protection who attended the summit. "But seeing what we've seen about the potential and partial solutions that are out there already, there's a real possibility for the nut to be cracked... there is hope given existing technology."

One problem is that telemarketers have gotten more sophisticated. Telemarketers are now using voice-over-IP to mass-dial numbers and "spoof" fake caller ID information in order to trick the recipient into picking up what looks like a call from their bank. This can be done for fractions of a penny per call. The costs of finding numbers to call are "almost zero," said Will Maxson, the FTC’s program manager for the Do Not Call Registry.

Unlike email addresses, where the number of possible combinations are virtually infinite, there’s a limited number of possible US phone numbers and the internet enables a spammer to realistically dial them all. So-called "qualifiers" vet the numbers by prompting a recipient to press a number, simply detecting whether the call gets picked up, and collecting numbers through fake online contests and other hoaxes.

Twenty years ago, there were long distance carriers and local exchange carriers, and all those companies were well-known. The evolution of the telephony ecosystem, however, has left us with a fragmented network of independent, small companies that can feasibly operate all over the world. Carriers also sell numbers back and forth and trade services such as call routing and protocol conversion, which can make it difficult to trace the origin of a call or assign responsibility to any one party for passing along spam.

There is good news, though

These are just the major challenges in combating robocall spam. There is good news, though: the FTC believes that the robocall industry has very low margins, meaning that even small steps toward decreasing the effectiveness of robocalls or driving up their costs could wipe out the market.

At the end of the "All the Rage" summit, participants concluded was that this is a hard problem and it’s going to take time, negotiation with carriers, and infrastructure changes. Based on the initial results to the FTC’s cry for help, the crowd may not be best equipped to do it.

Correction: An earlier version of this story inaccurately reported the year that the Do Not Call Registry went into effect. It started in 2003.