BlackBerry Z10 available on January 30th in the UK?

BlackBerry Z10 available on January 30th in the UK?

RIM let us know months ago that BlackBerry 10's coming out party would be this Wednesday in New York City, but we haven't known when the heavily-leaked BlackBerry Z10, the first device to run the company's new operating system, would be going on sale. A Vodafone UK employee has sent us an internal communication from the carrier that confirms the device will be available to order online at 5PM local time on Wednesday, January 30th, and that phones will be in-stock at all store locations by the 31st.

The Z10 is said to be Vodafone UK's first "4G Ready" device — it will work with the carrier's LTE network once it launches — and there will be a range of on-contract options that thankfully don't require signing up for a special BlackBerry SOC plan. If you're looking for no upfront cost, you'll be paying £47 per month for 3GB of data and unlimited talk and text for 24 months. The cheapest monthly option, meanwhile, is a £25 plan with an upfront cost of £229 that includes 100MB of data, unlimited texts, and 100 minutes of talk. If you're particularly smitten with the white version of the Z10 that we've seen, we're told that it won't be available until mid-February. We'll have more information, including launch plans in other regions, when RIM announces the device officially in a couple of days. 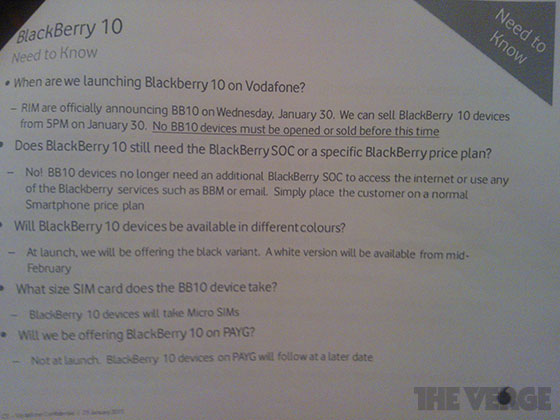 Update: We've also received an ad from UK retailer Phones 4u that all but confirms the Z10's imminent arrival. Additionally, it appears that Phones 4u will be offering first dibs on the white variant of BlackBerry's latest handset. Our friendly tipster believes the Z10 could be in stores by Thursday. 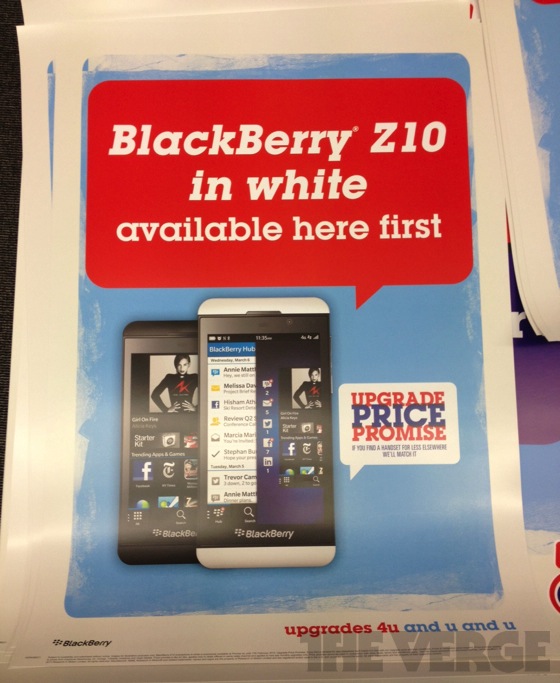