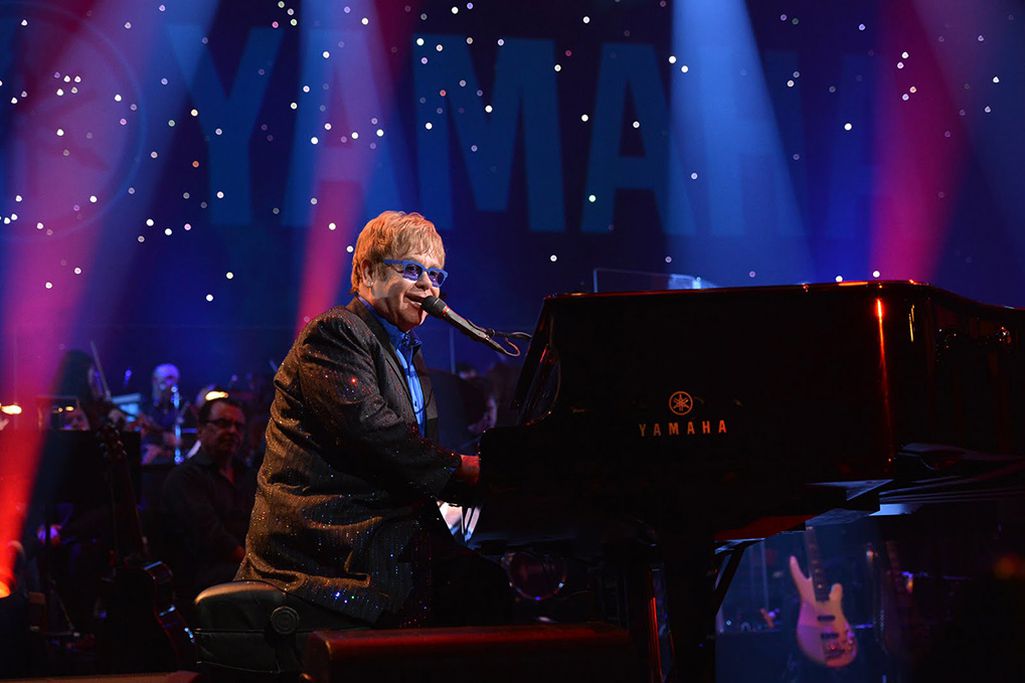 It was a dark and stormy night in Sherman Oaks and I was not ready to add a new emotion to my repertoire. There was a grand piano in the corner of the showroom at Keyboard Concepts and Sinbad was on the TV next to the piano. All of us were getting tired of waiting for Elton John. Those of us on the couch could wait it out no problem but Sin’s improvised routine, which had been running on fumes for half an hour, finally puttered out at 11:08. He passed the mic to the Senior VP of Yamaha, also improvising as he explained to us that we were making history as the audience of Elton John’s first-ever Remote Live broadcast: all of this audio was radiating warmly from inside of the grand piano, a Disklavier DC1E3. An ethernet cable ran discreetly from the back of the instrument to a hub that also hosted the laptop that feeding the TV its signal. Forty-five minutes after his scheduled appearance Sir Elton took his seat and launched into the opening bar of “Your Song” but nothing very historical-feeling was going on quite yet. A few bars later the Disklavier display blinked into consciousness, “RemoteLive Start!!,” and the black and white keys began to move exactly as if Elton were there but Elton was in Anaheim at the Hyperion Theatre with Toto and Sarah McLachlan and Michael McDonald.

Eight seconds later the ghost vanished. Keys fell flat in mid-chord and the piano sat lifeless as its mortal companion jammed away on-screen. The Disklavier TV tech is still in beta, and it was showing: awkward!

A Keyboard Concepts associate went through the usual routine: hard reset on the Disklavier, fiddle with browser and volume settings, unplug / replug, all to no avail. The 45-minute delay started to make a lot more sense as we sat through choppily-accompanied versions of Elton’s biggest hits, this pattern of fifteen telekinetic seconds followed by 30 seconds of absolute calm went on throughout "Candle In The Wind," "Daniel," and "Blue Eyes;" technical difficulties, grave ones, and they weren’t on our end. If you listened closely every time the connection dropped, you could almost feel a Yamaha server engineer getting fired.

The handful of us in the showroom stuck with it, though, and we kept hope alive through the opening of "Rocket Man." She packed my bags again pre-flight / Zero hour nine AM / And I’m gonna be high as a kite by then / the Disklavier died again. For his finale Elton had eschewed the 70-piece orchestra, leaving the keys as his only accompaniment, so when they went away we were treated to a selectively-reverberated acapella, the disconcertingly-depressing lyrics laid bare to waft through the showroom all alone. We looked around at each other, we looked at the ground, we looked sad. All this science I don’t understand / It’s just my job five days a week. We wanted Yamaha to trick us into believing.

And then, mercifully: the epic solo. The Disklavier sprang once again to life and our spirits lifted as it sprinted past its previous quarter-minute lifespan; for nearly three full minutes the Remote Live broadcast worked flawlessly and we were able to finally observe and appreciate what was going on in front of us.

It was suddenly very obvious that the lacquered beast before us had nothing at all to do with any old-timey player piano. These were not simple binary keystrokes — they were the fluid expressions of actual dazzling human celebrity fingertips. One key lifted slightly while the adjacent one was pressed down quickly as Elton rolled through scales, the pacing following his own internal metronome, not some atomically-calibrated timekeeping device. In a feeling similar to watching an ultra-high-definition newscast, tiny details leapt into view constantly, flooding our eyes and ears with data we hadn’t anticipated. Were the slight timing inconsistencies the subtle work of a nuanced genius or a glimpse of arthritic stiffness in an aging legend? Were the not-so-slight derivations from the original composition jazzy improvisation or the result of that extra G&T the Rocket Man had slugged before he went onstage? For a minute it seemed like we were getting to know this man far too intimately, but that sentiment faded quickly. We didn’t really care where the imperfections came from. We were just happy to finally have Uncle John in the room with us, for real.

I caught a flicker of movement in my peripheral vision and looked towards the floor but by the time my saccade reached it the motion had stopped. Was it a mobile ball of lint, maybe a fly? No: the motion returned momentarily and it was the sustain pedal tilting down and back up ever-so-slightly, betraying some sort of rhythm that was related abstractly to the music but not of the music. It had no discernable effect on the tone. It was only very delicately alive, like the involuntary twitching of an eyelid.

It was an hour later, driving home on the 101, that I finally felt that new, unfamiliar emotion. It was the feeling of having peered into a part of Elton John’s conscience that he had probably never even thought about: I had witnessed the physical manifestation of an afterthought, a completely intangible apparatus that existed on a weird plane I didn’t know I had access to.

The defining detail of the Remote Live experience was that the Disklavier wasn’t moving itself: it was very actively being moved, a reassertion that there was a soul pressing down on the keys and pedals, with no hint of machinery at work behind the scenes.

The Disklavier expert at Keyboard Concepts later explained that Yamaha’s velocity-sensing innovation, non-contact fiber optic grayscale shutter sensing, is an order of magnitude more perceptive than the standard MIDI definition of 128 steps. This means that every key movement is detected at a resolution of 1/1024th the length a a key travels from neutral position to totally depressed, or between any two other possible positions. As the pixels in a retina display are too small for the eye to detect, the transitions between these 1024 steps are too subtle for us to perceive as digitally-derived, leaving our brains (well, at least my brain) no choice but to believe that the movement is real.

Yamaha’s delicate mechanics had tricked me into seeing an evolution beyond the Kraftwerkian Mensch-Maschine: I was just looking at an actual Mensch, even though he was invisible. At such a high mechanical definition, the uncanny valley effect one feels when seeing a too-real android head was totally absent: I felt a direct connection to a soul, rather than a connection mediated by technology. I think this is because we weren’t staring down a suspicious replicant at the keys: we were looking at a precision instrument seemingly operated by an actual human. It became he. Maybe one day androids will have thoughts, but...afterthoughts? Seems kind of extraneous.

That performance data, digitally preserved somewhere in Anaheim, will always be the most direct way to connect with Elton John — even long after he’s gone

Philosophers have long believed that a fundamental property of human awareness is the ability to detect other live brains at work. I think it might be time for us to ditch that notion because I detected a real-ass Rocket Man’s brain at work last night at the Disklavier, not some unsettling imitation of it. It brought a romantic smile to my face, not an unsettled grimace. That performance data, digitally preserved somewhere in Anaheim, will always be the most direct way to connect with Elton John — even long after he’s gone.

Before I fell asleep last night I remembered that the Remote Live transmission had been completely broken for the majority of the performance, most notably at the very end, as a very-2013 tape delay was applied liberally to his vocals.

The tape delay, unwittingly laid bare by the absence of piano data, sounded amazing, and brought an old classic right up to date with the present. And perhaps that was Yamaha’s greatest trick: the technology,

even when it wasn’t working, let me see a part of Elton John he didn’t intend for me to see, much like those pedal afterthoughts, a secret bond I now have with this shimmering god of rock and roll.