The current Apple TV has been physically unchanged since the second-generation model rolled out in September of 2010, but a new FCC filing hints at a slight redesign. It looks like the next Apple TV set-top box will measure 93.78 square millimeters, down from the current model's 98mm wide and deep. It's not a huge size reduction, and the current Apple TV feels plenty small to us, but we're not surprised to see Apple continually strive to make its products smaller and smaller. This comes a day after MacRumors found that the recent Apple TV software update actually supports three models — the second- and third-generation Apple TV as well as an as-yet unidentified model. While it's far too soon to tell, there's a chance this smaller Apple TV could be it. Unfortunately, this isn't exactly the big Apple TV reveal we're all waiting for, but if Apple is in fact making a TV set, the first word we hear likely won't be from the FCC.

Update: AnandTech appears to have discovered that the new Apple TV will have an upgraded A5X processor, too, replacing the weaker Apple A5 chip used in the previous model. If true, it's a curious choice, considering how big the A5X is: the smallest Apple TV yet would have the company's largest processor. Still, it's not like the Apple TV has to be particularly efficient, since it's plugged into the wall. Perhaps Apple is using up a supply of old A5X chips that were originally destined for the 3rd-generation iPad, now the the 4th-generation has made it obsolete with its new A6X processor.

Update 2: Apple has let us know that despite the image on the FCC, the next Apple TV model will be exactly the same physically as the current model. It'll only contain a minor component change, and we were unable to verify if that component change will be the upgrade to the A5x processor. 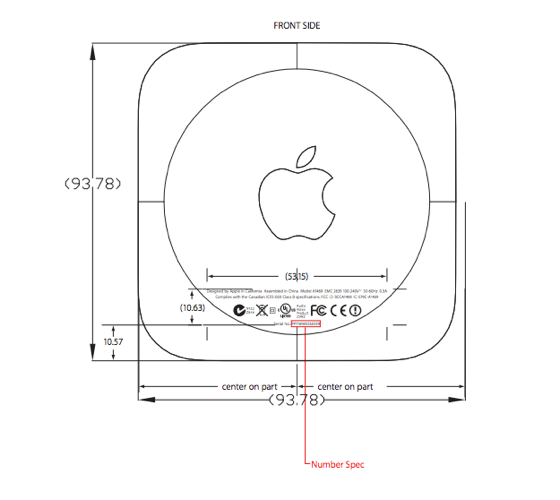