Samsung today announced the NX300, the newest member of its NX series family of interchangeable lens cameras set to hit retail in March. Despite its $749.99 price tag — lower than last year's top-of-the-line NX20 — Samsung is designating the 3D-capable NX300 as its flagship model moving forward. And it's equipped the mirrorless camera with specs to match that hype. Much like 2012's lineup, the NX300 employs a 20.3-megapixel APS-C CMOS sensor for its optics. (Samsung insists APS-C sensors offer the best image quality for its NX line, reiterating today that they will continue to serve as the foundation of the company's mirrorless offerings.)

Samsung claims it has the fastest autofocus system on any camera

But the NX improves on prior models with a more powerful imaging processor capable of 3D shooting and a hybrid autofocus system that combines phase and contrast detection(s). As for how that breaks down, Samsung says there are 105 points of phase AF detection and 247 points of contrast detection. What does that mean for you? Samsung claims the NX300 focuses quicker than nearly any digital camera in the world, though it proved difficult to gauge that claim during our brief hands-on time with a preproduction unit. We did appreciate a faster max shutter speed, now 1/6000, and the improved continuous mode that captures bursts of 8.6 shots each second. Further, the NX300 incorporates a tilting 3.31-inch AMOLED display — the screen can be oriented up to 45 degrees down and 90 degrees facing upward. The NX300's native ISO range has also been boosted to 25600, but cranking things that high is unlikely to yield you any usable photos.

In terms of design, Samsung is (closely) following the lead of Fujifilm, Olympus, and other manufacturers with a retro styling that features a metal frame with a faux leather stripe running through the middle. Button placement has been revamped since last year, with the NX300 eschewing a control dial in favor of dedicated buttons that should satiate anyone opposed to navigating the camera's touchscreen UI. Samsung has also seemingly taken cues from Sony here: the camera's video record button is placed identically to the one found on Sony's recent NEX-6. It's a convenient spot that you're unlikely to clumsily trigger. Speaking of video, the NX300 natively supports 1080p recording at 60 FPS, another improvement over prior NX models. But overall, the NX300's ergonomics leave something to be desired. Whereas my monstrous hands are fairly comfortable using Sony's NEX line and other fairly small mirrorless cameras, the NX300 was seemed to be less of a natural fit.

Manually backing up photos is becoming a thing of the past

Like the NX210 before it, the NX300 places a strong focus on Wi-Fi and effortless syncing. Samsung's new Smart Camera app (out now for Android and slated to arrive soon for iOS) combines remote viewfinder functionality with an optional automatic backup option that sends your images to a smartphone. software into one package. PC backup is also offered, a luxury which Samsung has finally extended to Mac users as well. 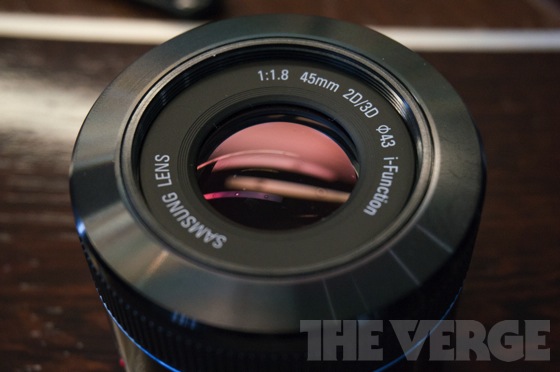 Alongside the NX300, Samsung also today introduced a new 45-millimeter lens to join its line of NX-compatible glass. The company says the F1.8 lens is the first one-lens 3D system ever offered on a consumer camera. Both 3D stills and full 1080p video can be captured with the lens thanks to a unique dual-shutter system. To make 3D content viable, however, image resolution is cut down to five megapixels — not that you'd be making prints of those shots anyway. Like the NX300, the new 3D / 2D 45mm lens will go on sale in March for a price of $599.99. That will come as an extra investment for NX300 buyers, as the camera's default package includes a 20-50mm, non-3D kit lens. That doesn't mean there aren't bonuses to be found: Samsung will be including a free copy of Adobe Lightroom with all NX300 purchases.