Meet RASSOR, the robot that could help us colonize the moon

Meet RASSOR, the robot that could help us colonize the moon

The Regolith Advanced Surface Systems Operations Robot — RASSOR, for short — is the robot that will help NASA find water on the moon, and could eventually lead to a permanent, manned lunar base. RASSOR is an excavator that NASA hopes will extract water, ice, and fuel from lunar soil. It's able to traverse steep slopes, climb over rocks, and dig for and collect soil before taking it to a processing plant for water extraction. NASA says that RASSOR will "be the feeder for a lunar resource processing plant, a level of industry never before tried anywhere besides Earth."

The main challenge in designing the robot was mass: it costs around $4,000 per pound to send something into space, but RASSOR must also be heavy enough to correctly operate in low-gravity lunar environments. The space agency's prototype excavator overcomes these hurdles with an ingenious 100-pound multii-purpose design. The robot's "legs" also act as digging tools, and are heavy enough to give RASSOR leverage to dig without the device tipping over. The shape-shifting design also allows RASSOR to stand vertically in order to dump the soil it's collected into a processing plant hopper without the need for a ramp. 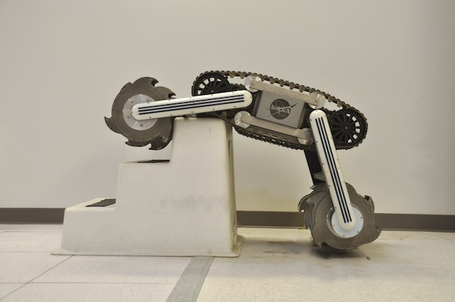 Although NASA is very pleased with the progress of its robot, it won't be headed to the moon just yet. The first water-seeking lunar mission is scheduled for 2017, which gives the engineers plenty of time to perfect the design. The agency still has a lot of work to do, and will begin testing a second iteration of RASSOR next year.