After Android and iOS, it's still anybody's game

News of BlackBerry 10's delay last summer was met with doomsday predictions by many, in the midst of a market share decline and a battle to remain relevant. After a boom of BlackBerry capturing the enterprise market, Apple's iPhone debuted in 2007 and changed the game for the entire phone industry — BlackBerry included. The company's stock lost nearly 75 percent of its value by the end of 2011, hitting a seven-year low. Former CEOs Mike Lazaridis and Jim Balsillie stepped down last year to make way for Thorsten Heins to take a sole CEO position at the company. But can Heins rebuild the empire for a battle to secure third spot or more? We're about to find out.

BlackBerry's first BlackBerry 10 device, the Z10, debuts in the UK tomorrow and will shortly be available in Canada, with US availability expected in March. It's a better smartphone than we expected, but we found in our review that the Z10 doesn't necessarily do anything better than the existing competition. BlackBerry is fighting to hold on to its third spot in the smartphone operating systems market share, to ensure it's a viable ecosystem that consumers and developers will buy into.

Inconsistencies in Windows Phone sales could open the door to BlackBerry

Microsoft is aiming to break BlackBerry's market share and steal third place. Early signs in 2012 suggested that the company was on track to level things out in Q3, but a slight increase in market share for BlackBerry to 5.3 percent and a decline for Microsoft to 2.4 percent means things are very much still up for grabs in 2013. Gartner will release its Q4 figures in a couple of weeks, capturing the newly released Windows Phone 8 devices, so the picture is bound to change again in favor of Microsoft — but any small inconsistencies throw the door open for BlackBerry to successfully defend its position. 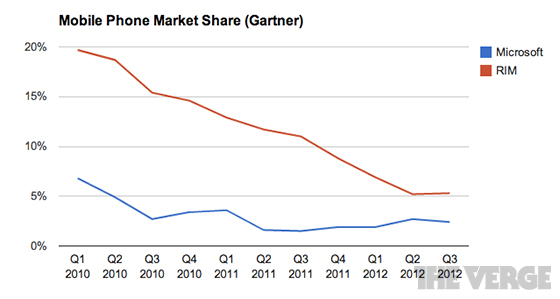 BlackBerry's approach is to ensure it's everywhere. AT&T, Verizon, Sprint, and T-Mobile are all supporting its efforts and BlackBerry will complete testing on 110 carriers globally by the end of February. A delayed launch in the US may hinder early prospects for 2013, especially given it's one of the largest smartphone markets in the world, but it's encouraging to see the initial carrier support. Microsoft on the other hand has struggled to convince US carriers to stick with Windows Phone. Although AT&T, Verizon, Sprint, and T-Mobile all launched Windows Phones, Verizon and Sprint essentially gave up on the platform until recently. Verizon is back on board with Windows Phone 8, and Sprint has committed to Samsung and HTC devices in the summer, but their reluctance throughout 2012 didn't boost Windows Phones prospects in the US. BlackBerry may face similar prospects if its initial devices fail to capture consumer enthusiasm, especially given the disappointing BlackBerry Storm sales on Verizon.

Another big aspect to this war of ecosystems is apps. BlackBerry has been quick to point out its BlackBerry 10 app submission rates, with 15,000 apps in less than two days. At its press event today BlackBerry is revealed it's launching the Z10 and BlackBerry 10 with around 70,000 apps, a huge number for a new platform. But stats aren't everything, it's quality over quantity. In our review of the Z10, we found that many of the applications in BlackBerry World seem to be slightly altered PlayBook apps or unfinished / experimental. Our editor-in-chief notes in his Z10 review that he'd rather see 25,000 apps that really mattered over a big number — a sentiment that rings true for both BlackBerry and Windows Phone.

Microsoft has struggled to convince developers that Windows Phone is worth creating apps for. 120,000 apps for Windows Phone is an equally large number, but it doesn't paint an accurate picture of what is actually available. Microsoft promised big iOS games like Temple Run and Jetpack Joyride in time for the holidays, but the company has failed to deliver them. Pandora is set to debut in early 2013, but Microsoft's focus at its Windows Phone 8 unveil was on new operating system features like Kid's Corner over the importance of apps — despite a claim of 46 out of the top 50 apps from rival platforms. BlackBerry made a brief reference to Microsoft's 46 apps, but the company largely avoided mentioning competitors. One similarity between the two was an on stage debut for Blackberry's new global creative director, Alicia Keys. Microsoft chose celebrity Jessica Alba to promote its Windows Phone 8 launch.

BlackBerry claims over 1,000 top apps are already committed to BlackBerry 10. Facebook, Twitter, WhatsApp, Foursquare, and other top apps are available immediately. BlackBerry also has four Angry Birds titles, games from EA and Gameloft, and the popular Jetpack Joyride and Cut the Rope. Publications are also on board, with the Financial Times, New York Times, USA Today, Wall Street Journal, and BBC all providing apps. It's an impressive list of names and it proves BlackBerry 10 has potential to attract developers. The press event focused in on the apps side too, highlighting a number of key apps. The key, like Windows Phone, will be convincing developers to release on BlackBerry 10 at the same time as Android and iOS. Android lags behind with some app launches, but the big names are starting to close the gap to focus on iOS and Android initially with a wait and see approach to Windows Phone. BlackBerry will have to convince developers through device sales to strengthen its ecosystem, and it doesn't have the same clout as Microsoft does with its popular Windows operating system and cash reserves.

There's no clear cut winner, third spot is still up for grabs

Questions remain over Microsoft's approach to mobile, with close partner Nokia continuing to pursue exclusive carrier deals in the US. Nokia's recent earnings revealed higher Lumia sales and a return to profitability after six quarters of losses, but 2013 is the battle for third place in an ecosystems war that is dominated by Android and iOS. The winner will be the company that can not only excite customers with beautiful hardware, but also supply them with apps and games they desire. BlackBerry enters that battle in a big way today, but for now third place is still very much up for grabs.