How the 808 drum machine got its cymbal, and other tales from music's geeky underbelly

From Deadmau5 to Don Lewis, Trent Wolbe explores the nerdy past, present, and future of music at the Anaheim Convention Center

Share All sharing options for: How the 808 drum machine got its cymbal, and other tales from music's geeky underbelly

This year marks the 30th anniversary of MIDI, the language that electronic instruments use to talk to one another. It’s how drum machines stay in sync with arpeggiators, how a keyboard tells a synthesizer which notes to play, and how a DJ controller tells an MP3 how to behave. Making a keyboard without MIDI today would be kind of like making a car without air conditioning — something people didn’t know they needed until it existed.

Before there was MIDI, there was Don Lewis. Raised with a rich gospel tradition in Dayton, he brought his myriad musical talents to San Francisco in the ‘60s, where he was a staple in nightclubs. His one-man-band became known for its wild array of electronic instrumentation, which was still a novelty in those days — a small truckload of synthesizers and early rhythm boxes accompanied Don’s richly-vocoded tenor to make a sound no one had heard but everyone liked.

Don had learned the ins and outs of electronics during his time as an engineer in the Air Force and was constantly digging around in the circuitry of his machines, bringing new sonic capabilities to life with his soldering iron decades before circuit benders would popularize the concept of instrument hacking. Normally his audience was profoundly unaware of the trailblazing after-market innovations they were dancing to, but the crowd at the NAMM show in 1969 was a little different.

Don had been hired by the Hammond organ company to demo its products on the show floor. He was using an Ace Tone rhythm box (which was distributed by Hammond at the time) as his percussion section. "I had modified my Ace Tone to death, changed all the rhythms because none of them fit my style of playing. I also wired it through the expression pedal of the Hammond, so I could get [percussion] accents, which no one was doing then. After the show this man from Japan came up and the first thing out of his mouth was ‘that looks like my rhythm unit but it doesn’t sound like my rhythm unit! How did you do that?’" It was Ikutaro Kakehashi, the president of Ace Tone. 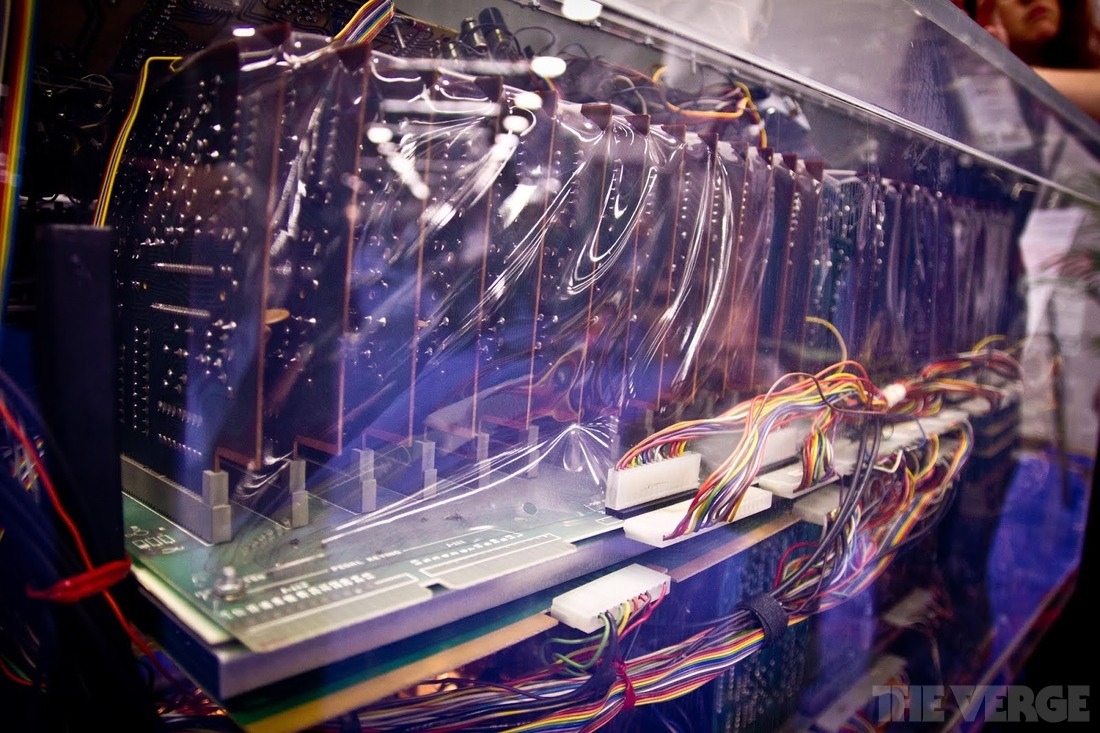 "I opened it up, it had diodes and stuff going all over — we became instant friends. I begged him for years to come up with a programmable rhythm unit because I got tired of having to change out the patterns the hardware way — it was hard!" Kakehashi was listening. In 1972 Kakehashi formed Roland Corporation and hired Don to work on projects that eventually became the CompuRhythm CR-68, and in 1980, the iconic TR-808, a drum machine upon which the entire history of modern dance music was built.

Forty-four years after that Hammond demo Don was performing at NAMM once again. 2013 saw him perched in a corner of the Anaheim Convention Center’s Hall E, the cheaper basement exhibition space where most cash-strapped innovators buy floor space. He was surrounded by a plexiglass-enclosed network of ancient circuitry called LEO, short for Live Electronic Orchestra. It’s a one-off work of art, a kind of who’s who of vintage synthesizers networked to one another through connection standards the industry has long forgotten but Don is still fluent in. A series of hand-built buffer boards and timing modules allow an Arp Pro Soloist to talk to a Promars Computronic and a Roland Jupiter-4. The Hammond expression pedal can control a variety of parameters for any of the sounds coming through the Boss KM-6A mixer, whose channels Don built a remote control panel for right into the body of the three-stage organ. It’s basically a 1977 copy of Ableton Live that weighs two tons, doesn’t have a EULA, and does a heart-melting rendition of "Amazing Grace."

Don sat there and played his network of boxes for five straight eight-hour days as a guest of the NAMM museum, which had paid for LEO to be taken out of storage and refurbished for the show. He was constantly popping out from behind the plexi to hug people he’d met throughout his careers as both engineer and session player for people like Quincy Jones, Sergio Mendez, and Michael Jackson. The whole time he was fielding questions from noobs and giddy nerds alike, telling stories from the golden era of early electronic synthesis like some sort of funky Garrison Keillor. He had his 808 with him, of course, and I asked if he had had any idea that it would become what it did. He certainly hadn’t, but he did have a really good story to tell me about one of its most revolutionary sounds. 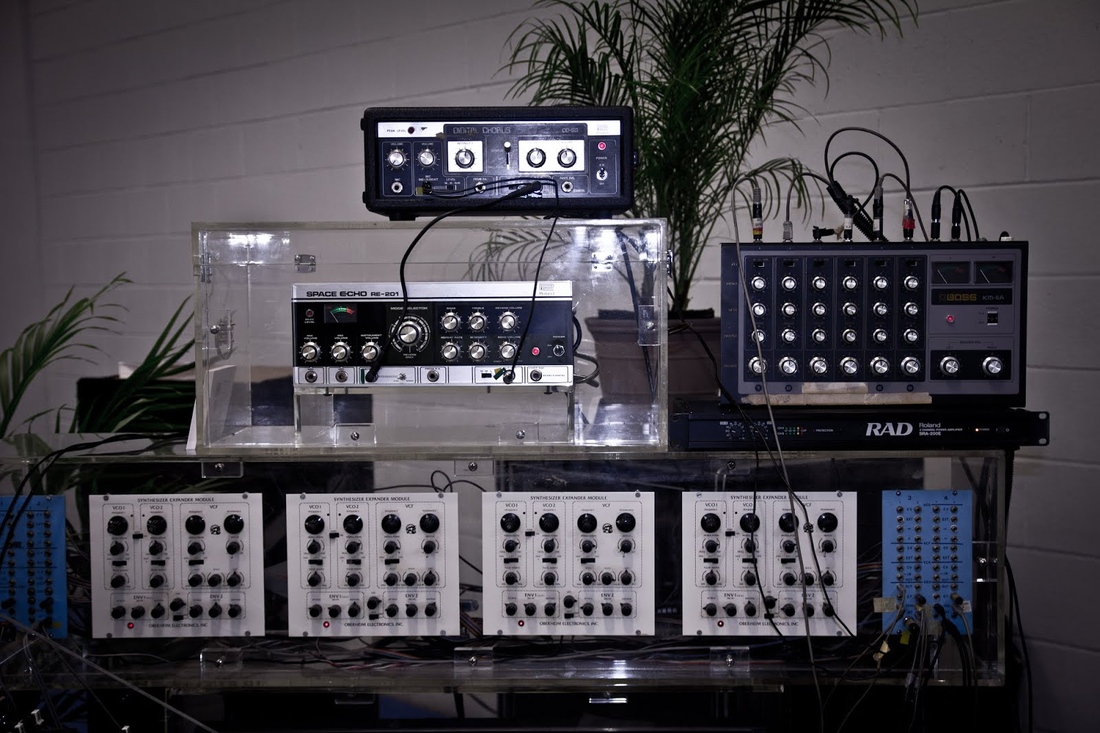 On a visit to Roland’s Tokyo offices in the late ‘70s, Don was working with chief engineer Tadao Kikumoto. "That day he had a bread board of an 808 and was showing me what was going on inside — he sort of bumped up against the breadboard and spilled some tea in there and all of a sudden he turned it on and got this pssh sound — it took them months to figure out how to reproduce it, but that ended up being the crash cymbal in the 808. There was nothing else like it. Nobody could touch it." 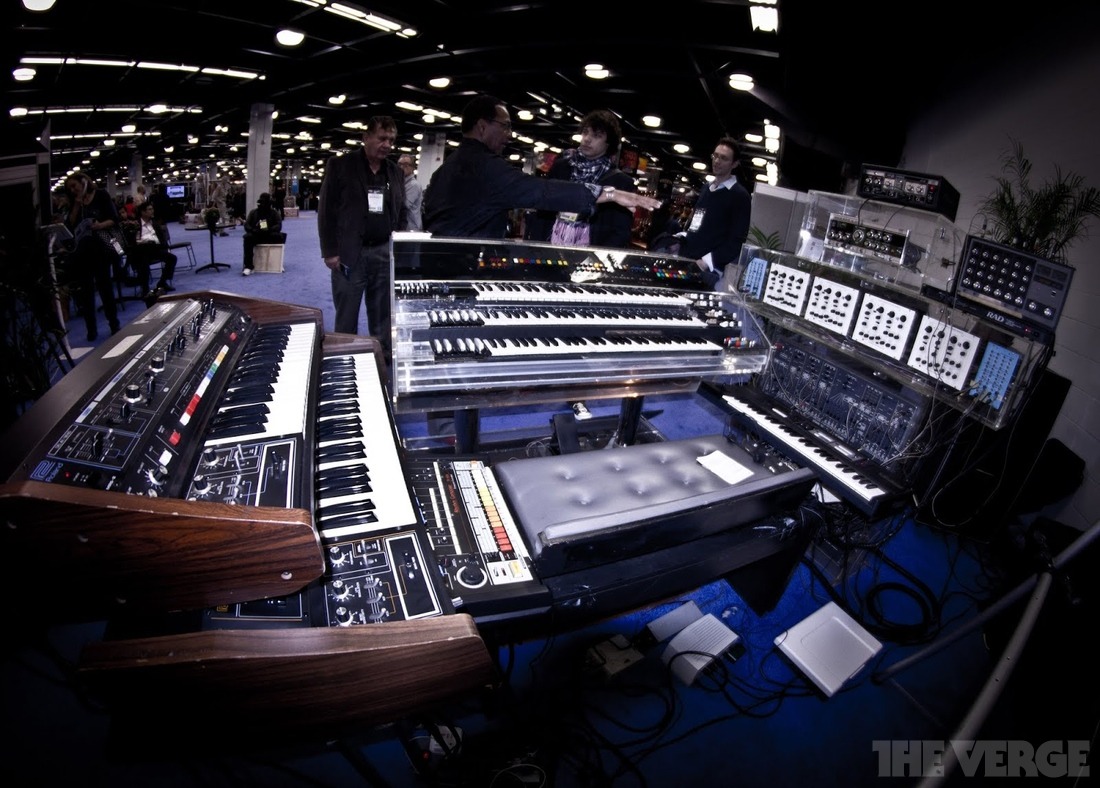 Hall E is still relatively cheap, and it still houses the most innovative ideas at NAMM. Some picks from the bargain basement this year:

First-time attendee Freescale Semiconductor (you may know them as "the company who made the accelerometer in the Guitar Hero guitar") had a modest booth showing off a $100 modular iOS development kit called The Tower. They didn’t have a specific mission at NAMM, but had seen a lot of interest in the latest expansion board, a one-chip USB audio conversion and broadcasting tool. 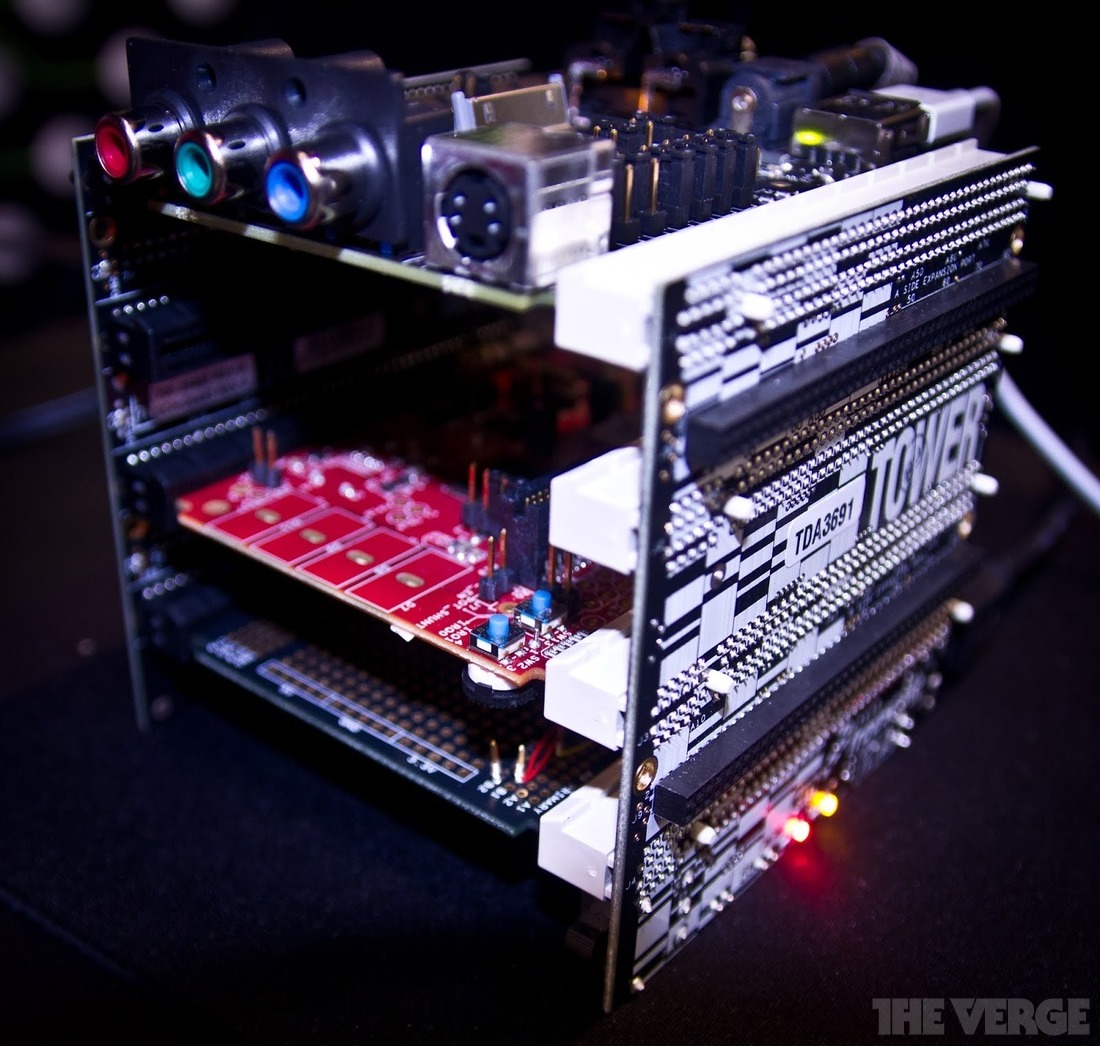 Japanese developer Internet Music Software and Data (yup) was showing off the latest version of its Vocaloid suite called Megpoid. If you’ve ever heard a Japanese pop song with that frighteningly-kawaii brand of vocals that sounds halfway between a human and a robot (there are a lot of them), it was probably created with Vocaloid. An English version of the PC software is available for trial download now, and a Mac version is coming later on this year.

LA newcomers Antiquity Music announced the super-weird Wheelharp last week. Part violin, part weaving loom, part harp, it looks like something steampunks would have put together if they had been steampunking around at the height of Rococo design. Its curved wooden keyboard, delicate string work, and anachronistic spool drive are the anti-iPad: each instrument is custom-built to the tune of around $10k. It sounds like ancient honey drizzled through the sands of the purest times and looks like it belongs in the Great Room at Downton Abbey.

In the far corner of Hall E was a pairing of technology so heartwarming that it could probably write its own Hallmark cards: a Commodore 64 MIDI sequencer playing AniMoog software on an iPad. 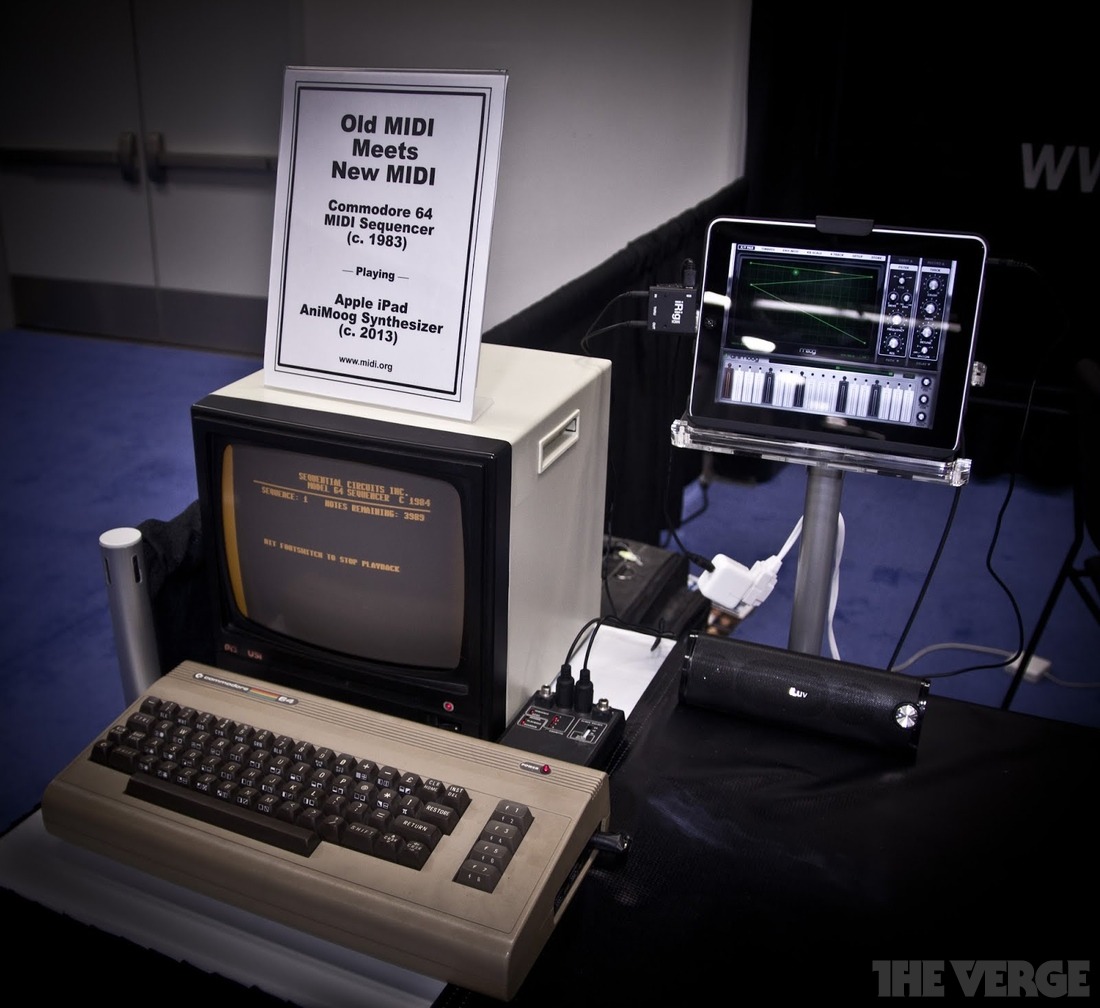 This touching illustration of intergenerational friendship was a part of the exhibition honoring MIDI’s 30th birthday, which featured a playable timeline of instruments from 1983 to 2013: a Yamaha TX7, an Atari 1040ST, a Moog Prophet, and a Roland Jupiter-6. Gear historians could also view the founding documents of the International MIDI Association, signed by Bob Moog.

On the floor of any other trade show this walk down memory lane would have felt forced and awkward. But here at NAMM, it was just a way to say "Hello, we are every bit as nerdy as you are but we have been this way for longer than you have probably." Where CES abandoned character in the pursuit of profit long ago, the NAMM show has maintained a healthy balance between the two, firmly planted on the right side of the very thin line that separates gearheads from mere consumers, since its first exhibition in 1901. 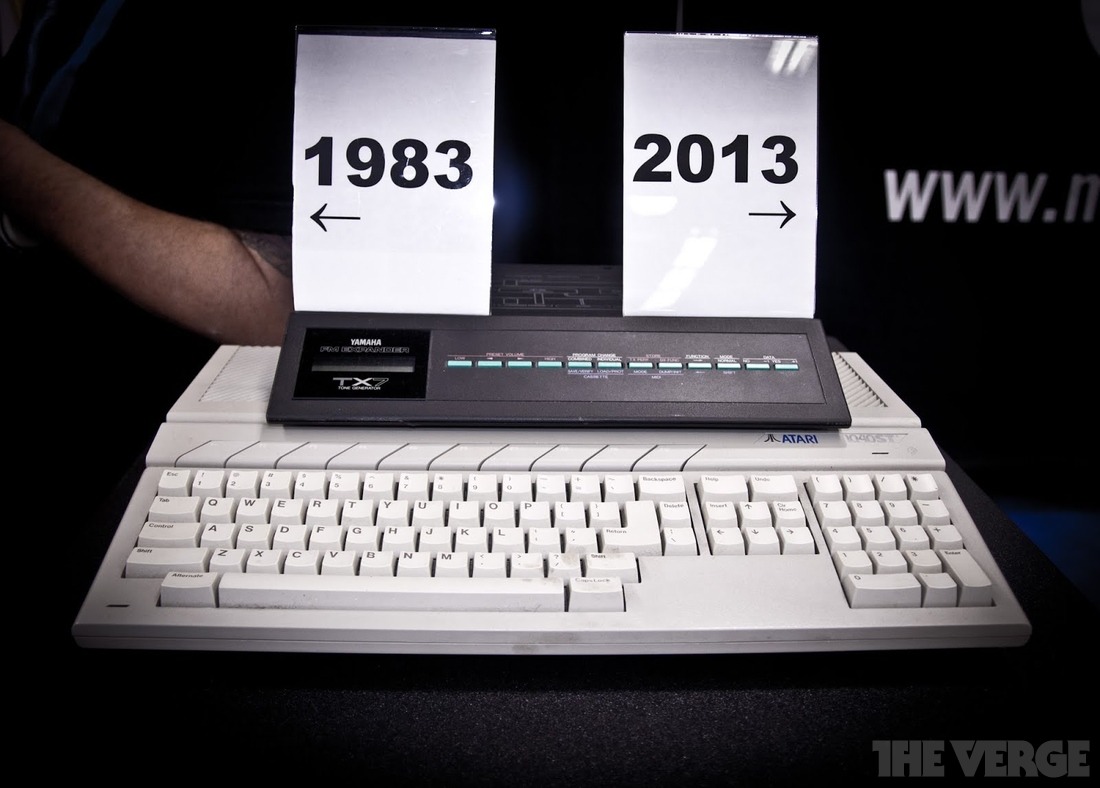 At other trade shows celebrities usually only show up when they’re shilling for a new pair of fashionable 3D glasses or getting paid to draw new audiences to dying brands. But NAMM is different — Joel Zimmerman, the rodential king of electronic music, was all over the floor, demoing new gear from giants like Korg and local operations like Big City Music just like everybody else. And in a way, he is the everybody else that NAMM caters to: if this nerd candy raver guy with Space Invaders and Zelda tattoos who dresses up in a mouse costume can change the world with his music, so can that tween trying to nail "Stairway" in his bedroom: they’re both people pushing the limits of what they can do with their instruments for the sake of just rocking the fuck out. It still feels like it’s all about the music, man, and that feels good. 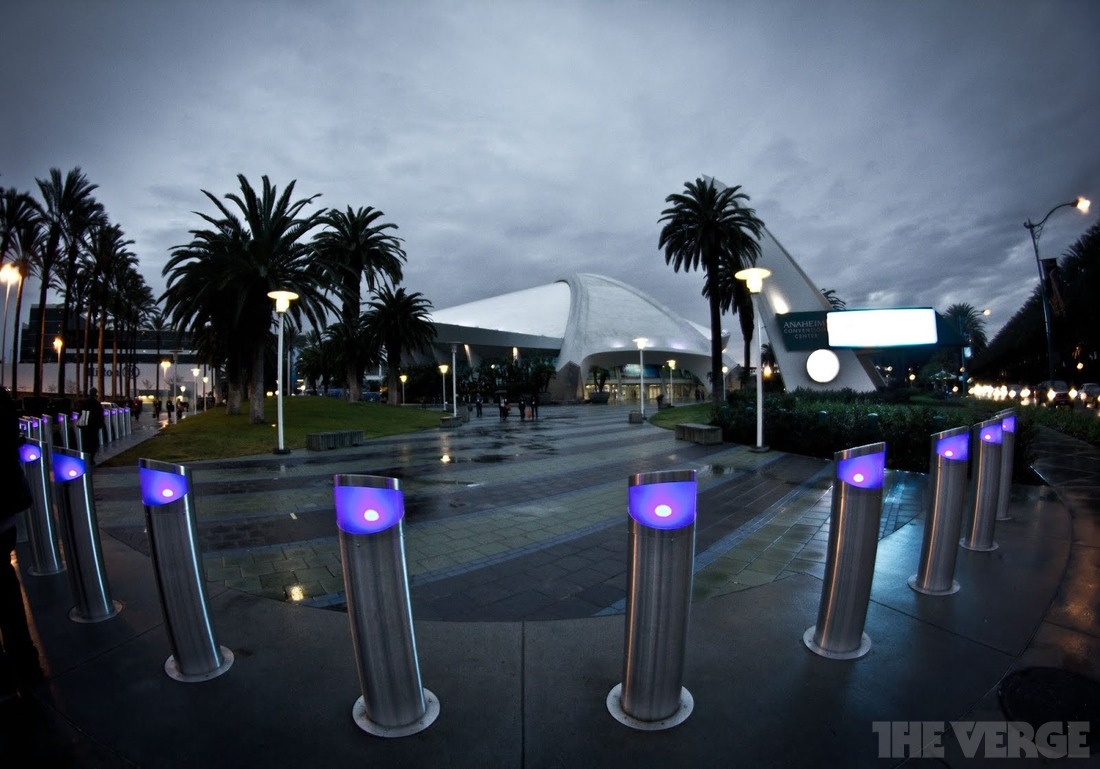 A documentary called "The Ballad Of Don Lewis" is currently in production. It features Don wearing a disco ball blazer and describing his descent into depression as he renounced his membership in the musician’s union after it banned the use of electronic instruments. Watch the trailer here.