BlackBerry 10 against the competition: how the Z10 fares against iPhone, Samsung, and others

Share All sharing options for: BlackBerry 10 against the competition: how the Z10 fares against iPhone, Samsung, and others

The BlackBerry Z10 isn't just "a new BlackBerry," It's quite possibly the most important device the company has ever released, representing BlackBerry's comeback effort in a crowded smartphone market now dominated by Apple and Samsung. But are modern hardware specs and a brand new operating system enough to help the Z10 stand apart from the competition? Can the Q10's QWERTY keyboard lure business users away from Android and iOS? It's too early to know the answers to those questions, but we can finally pit BlackBerry's latest up against current smartphone contenders.

Considering how much time you spend staring at your smartphone, the quality of it's display should always be among your chief criteria when picking a new device. Thankfully this isn't lost on BlackBerry. The resolution of the Z10's display is 1280 x 768. In terms of pixel density, that's about 356 pixels-per-inch, which narrowly bests Apple's iPhone 5. It doesn't measure up to the 1080p displays increasingly seen on Android smartphones, but everything on screen is still extremely crisp and detailed. We've found color reproduction, clarity, and touch response to all be top-notch, though the Z10's backlight seems a bit weaker than other devices.

Where BlackBerry has deviated from the norm is in choosing the size of that display. At 4.2 inches, the Z10's screen is a hair bigger than the iPhone 5, but is downright tiny compared to the massive 5.5-inch panel on Samsung's Galaxy Note II and similarly large displays from other manufacturers. Like Apple, BlackBerry wants customers to be able to comfortably navigate its device using just one hand.

They're not 5 inches or 1080p, but BlackBerry's new displays look great

Square displays have become even more foreign to smartphone shoppers in recent years, but that's just what you're getting on the BlackBerry Q10. Obviously that's thanks to the physical QWERTY keyboard found directly beneath it. At a resolution of 720 x 720, this is still one of the higher-res square displays we've seen, so opting for a real keyboard doesn't mean you'll be sacrificing clarity. 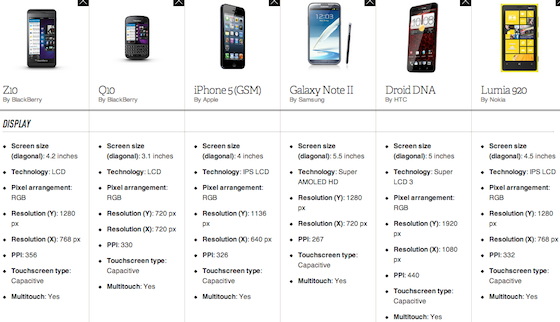 Smartphones are killing the point-and-shoot camera, so delivering a capable shooter is crucial for any flagship handset. BlackBerry seems to have achieved that with the Z10, as it's 8-megapixel rear camera proved more than adequate in our review tests. Colors were a bit washed out, and its low-light capabilities are no match for Nokia's Lumia 920, but considering it's aimed at generation that shares photos primarily over Facebook, Twitter, and Instagram, it gets the job done without any glaring flaws. Unfortunately we've got no clue as to how the Q10 will compare; BlackBerry isn't yet revealing whether it employs the same 8MP sensor or another camera in the Z10's QWERTY sibling.

BlackBerry has outfitted the Z10 with 16GB of storage, which is expandable to a max of 48GB when you insert a 32GB microSD card. That doesn't quite reach Apple's highest-tier 64GB iPhone 5, but it should be just fine for most owners — particularly as your personal media moves deeper into the cloud. Where the Z10 surpasses the iPhone is in memory; both the Z10 and Q10 are allocated 2GB of RAM, double what you'll find in an iPhone 5. But it's not enough to beat Android, where 2GB has already become an established standard thanks to the Nexus 4, Samsung Galaxy S III, and other devices.

Both next-gen BlackBerry devices utilize a dual-core TI OMAP 4470 chipset clocked at 1.5GHz. At first glance, that's not as beefy as the quad-core chips found in recent Android hardware. But ultimately what matters is how using the device feels to a consumer. Windows Phone 7 proved that an operating system can be smooth and responsive despite packing what may otherwise be considered "underwhelming" components. In our tests, BlackBerry 10 was fluid without any major hints of lag. We'll need more time to judge how the Z10 handles the most demanding high-end mobile games, but thus far the experience is solid.

Yet again it comes down to this, and it's never an easy decision. iOS has an unrivaled app catalog running on superb hardware. Android's software is arguably fresher and its notification system still leads the class. Over the last few years consumers have flocked to both of these platforms, but BlackBerry has had to deal with the opposite trend. As the company has struggled to reinvent itself, once loyal users (and businesses) have had little choice but to migrate toward Droids and iPhones. Are consumers that spent years using legacy BlackBerry products willing to take another chance with the company now? More importantly, how can the company differentiate the Z10 and Q10 in a crowded market? Windows Phone hasn't yet established that there's room for three in the smartphone landscape; BlackBerry's task is proving it's a viable fourth option.

Compare this: BlackBerry Z10 vs. BlackBerry Q10 vs. iPhone 5 vs. Galaxy Note II and more