Facebook beat the street in the fourth quarter of 2012, delivering revenue of $1.59 billion and earnings of 17 cents per share.

If you look at the year-over-year changes, Facebook had $1.13 billion in revenue and a profit of $302 million back in the fourth quarter of 2011.

Wall Street is paying particularly close attention to Facebook's growth in mobile. It's well know that the company is seeing its user base transition from desktop to tablets and smartphones. One good sign on that front, Facebook's mobile Monthly Active Users were 680 million as of December 31, 2012, an increase of 57 percent year-over-year. Mobile also made up 23 percent of ad revenue in the fourth quarter, versus 14 percent last quarter.

In fact, for the first time, the number of daily active users on Facebook's mobile platform was bigger than on the desktop. It's a clear sign of the transformation in the social network's business. In this quarter there were also 157 million users who signed in from mobile only, never using the desktop. That nearly triple the number of mobile only users from one year ago.

Facebook made more money from each one of its user's this quarter, with Revenue Per User (RPU), increasing from $1.38 to $1.54 globally. This still lags far behind competitors like Google, who bring in between $7-8 per user.

The company's operating margin, another closely watched metric, was 33 percent — a modest gain from 30 percent last quarter but far from the gaudy 48 percent margins Facebook earned a year ago.

The stock is up slightly in after hours trading. 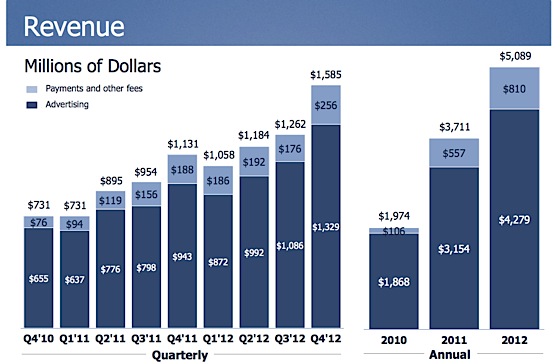 More from this stream Facebook IPO: the $16 billion friend request