Mark Zuckerberg: 'I want to dispel this myth that Facebook can't make money on mobile'

Mark Zuckerberg: 'I want to dispel this myth that Facebook can't make money on mobile'

Facebook today announced its fourth quarter (Q4) earnings report for 2012, which included some key findings. For the first time ever, more people are using Facebook on mobile each day than on desktops. In fact, 157 million people worldwide are using Facebook only from mobile devices — a number the company can't afford to ignore. On the company's earnings call, CEO Mark Zuckerberg seems to get it. He said, "There is no argument. Facebook is a mobile company."

As you might expect, as more people flock to mobile, so has the company's ad revenue — 23 percent of which now comes from mobile, compared to 14 percent just a few months ago, and 0 percent a year ago before Facebook mobile ads existed."I want to dispel this myth that Facebook can't make money on mobile," Zuckerberg said. "It may have seemed like that a year ago, because we weren't really trying yet."

"There is no argument. Facebook is a mobile company."

Today, 23 percent of all time spent in apps is on Facebook, Zuckerberg said, citing a Comscore study. He also pointed to Instagram as a "platform success story" and an advertising opportunity for mobile. Since its acquisition, Instagram has gone from 27 million users to over 100 million users, each of which (according to Comscore) spend more time on Instagram than they do on Twitter. The company has also recently revamped nearly all of its core mobile applications in "native" code, which makes them run much faster on both Android and iOS, and has continued adding new features like free voice-messaging (and even free calling in the US and Canada) which are big draws for mobile users.

"A lot of what we did last year was improve our mobile development processes. Now we are there," said Zuckerberg. "The next thing we are going to do is get really good at building mobile first experiences," he said. Features like these are especially compelling to Facebook markets outside the US, where mobile web access is surging. "We'll be able to make more money for each minute users spend on mobile," (versus on web), Zuckerberg said, and he made clear that the company is heading in that direction. 680 million users access Facebook on mobile per month, the company said in its earnings report, an increase of 57 percent since the same time last year. 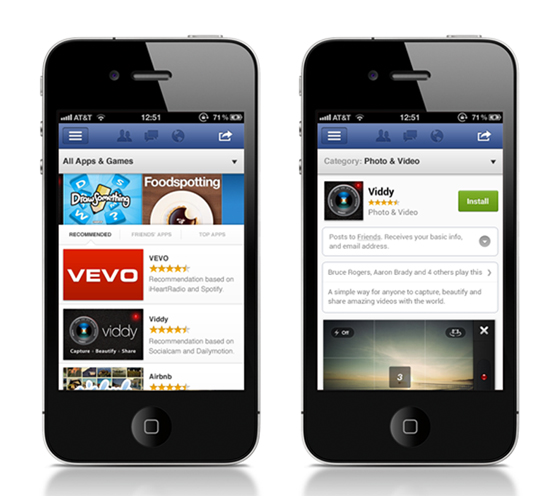 While mobile growth is accelerating, Facebook admits that it needs a different approach towards ads. "On desktop, we've been able to build a billion dollar business with ads off to the side," Zuckerberg said. "On mobile, ads will be more like TV: high-quality and deeply integrated into the stream." COO Sheryl Sandberg said ads in News Feed offered up to 8X the amount of off-line sales than those in the site's "right rail." It's good news for Facebook on mobile, where the site is essentially just a miniaturized News Feed. The goal going forward seems to be continuing to ensure that Facebook is speedy on any phone you can get your hands on. "We need to make Facebook good across all devices and have it more integrated with their systems," Zuckerberg said.

While Facebook appears to be well aware of the "mobile revolution," it didn't launch Graph Search, its new search and recommendations feature, on mobile devices. It's easy to argue that Graph Search would be more useful on mobile, where finding quick access to restaurants friends like would be critical. Facebook even went so far as to call Graph Search the third of "three pillars of Facebook," which include News Feed and Timeline, yet clearly mobile is not important enough to test the waters for a new product. While Facebook hammered home the "mobile-first" maxim over and over on the call, at what point will mobile truly come first?