There's never been a more rewarding time to get into photography. Cameras take better photos than ever, the improving quality of mobile phone sensors has democratized the hobby, and, through online services such as Tumblr and Instagram, the act of publishing your work to a receptive audience is now open to everyone.

Camera makers are dropping the ball

But camera makers are dropping the ball. The growing popularity of photography is largely down to phones and online services, but the likes of Canon and Nikon just aren't joining the dots. Today marked the start of CP+ 2013 in Yokohama, the biggest trade show of the year for one of the few industries where Japanese companies have maintained their monopoly on hardware. And after walking the floor, it's clear that unless their makers' attitudes change — and fast — cameras will become a marginalized product; the preserve of the professional and hardcore enthusiast.

Although connected cameras have been a long time coming, they first showed up in force at Photokina last year. That event hosted offbeat efforts like Nikon's Android-powered S800c; it was understandably rough, but seemed to point to a positive future where your camera could be as versatile as your phone. Since then, just about every camera maker has shown a product designed to make it easier to share pictures online, usually by connecting to your phone over Wi-Fi. There are two big problems, however — it doesn't work well, and it's on the wrong cameras.

I'm yet to see a camera sync and transfer images to a phone quickly enough to make it worthwhile for the type of images commonly shared to social services. Often buried deep within impenetrable menus, the experience is not one that I'd expect many people to go through except in emergency circumstances — a journalist needing to email a photo, for example. There are other use cases too, such as remote control functionality, and these are enough to make Wi-Fi a feature worth having. Not enough, however, to make a compact camera worth having.

Wi-Fi is worth having, but compact cameras aren't

Compact cameras are dead, for all intents and purposes. If you have a high-end smartphone released in the last year or two, we wouldn't recommend a point-and-shoot unless you have over $600 to drop on a Sony RX100. Yes, it'll take better pictures than your phone, but we're far beyond the point of diminishing returns — spending $200 or $300 on a compact camera just isn't a sensible outlay for the average Instagram addict with an iPhone 5. And the problem's only going to get worse for camera makers; companies like Nokia are pulling software and hardware tricks that mean their phones can take better pictures than many point-and-shoots, at least in certain situations. While features like lossless zoom are still out of reach for (most) mobiles, the advantage of carrying around a dedicated compact is a very slim one indeed when you consider the connectivity benefits offered by a phone. 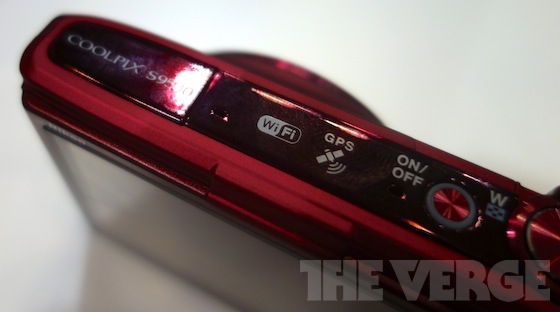 That's why it's so frustrating to see camera makers push Wi-Fi and NFC features on the bottom of their range, ignoring their products that actually have the potential to leap beyond smartphones. If mirrorless cameras are the future of photography, why aren't the likes of Sony and Panasonic trying harder to redefine the form? Sure, Sony outfitted some NEX cameras with Wi-Fi last year and Samsung has done the same with its mirrorless range, but the implementation is severely lacking and far below what either company is actually capable of.

Samsung's Galaxy Camera is the closest pointer yet to the future

Samsung, to its credit, has made the most effort to break new ground with the Galaxy Camera, which is conspicuous by its absence at the Japan-focused CP+. It's a woefully inadequate shooter in terms of picture quality, and its implementation of Android — essentially, it's a Galaxy S III with a giant zoom lens — is most certainly overkill, but by offering direct access to the apps that are redefining photography, it's the closest pointer yet to the camera of the future. And it's a product that traditional camera companies would find very difficult to replicate without the same ability to leverage mobile know-how. Something is going very wrong with Kaz Hirai's "One Sony" initiative if the company doesn't have a similar product in the works, though its strategy to date seems to be offering proprietary apps for a locked-in ecosystem. But Android cameras will never be relevant unless they can justify their price tag with a suitable leap in image quality, however convenient automatic Dropbox backup may be. A more refined approach to software is needed, too — it's not good enough to simply port a phone UI to a camera.

High-end cameras have advantages that phones can't match: large sensors and fast lenses that give creative flexibility and strong performance in tricky situations, and dedicated physical buttons for direct control over images. Those are the reasons people use mid-range to advanced cameras today, and they're the reasons enthusiasts will continue to do so. But unless manufacturers keep up with the times, the mobile industry is going to keep biting away at their bottom lines. Point-and-shoots have already become all but irrelevant for the growing number of smartphone owners, and while mirrorless systems offer a great shot at bringing high-end photography to the mainstream, it's up to camera makers to make sure those customers don't move to smartphones entirely. We're still yet to see a user-friendly wireless implementation or a high-quality Android camera — and as long as mobile sensors improve with each new generation of phones, the clock will keep on ticking.