Surface ships fewer than 900,000 units, according to IDC

Surface ships fewer than 900,000 units, according to IDC

Some iPad competitors see strong growth, but not Microsoft's slate

Global tablet shipments soared during Q4 last year, bolstered by a stronger-than-expected holiday retail season. That's according to the latest report from research firm IDC, which found that worldwide shipments reached a record 52.5 million units last quarter — a 74 percent increase over the previous quarter, and 75 percent jump over Q4 2011.

The iPad, not surprisingly, led the way last quarter, with 22.9 million units shipped and a 43 percent market share. iPad shipments increased by 48 percent over Q4 2011, though Apple's market share declined for the second consecutive quarter, due in large part to a surge in competition. Yet the company still enjoys a healthy lead over second-place Samsung, which saw shipments increase by 263 percent over the year, but comprises just 15 percent of the market.

The market is getting crowded

Fourth-place Asus saw the biggest yearly jump among any vendor, with shipments rising by more than 400 percent on the strength of its Nexus 7 tablet, though its market share remains just 5.8 percent. Rounding out the top five are third-ranked Amazon, with 11.5 percent market share, and fifth-place Barnes and Noble, which was the only leading company to see a year-on-year decrease (27 percent) in units shipped.

Notably absent from the top five is Microsoft, which entered the market last quarter with the Surface. According to IDC, the company shipped "just shy" of 900,000 units last quarter, though its entry into the market is indicative of a broader trend, as companies continue to shift away from the PC. "We expected a very strong fourth quarter, and the market didn't disappoint," IDC tablet research director Tom Mainelli said. "The record-breaking quarter stands in stark contrast to the PC market, which saw shipments decline during the quarter for the first time in more than five years." 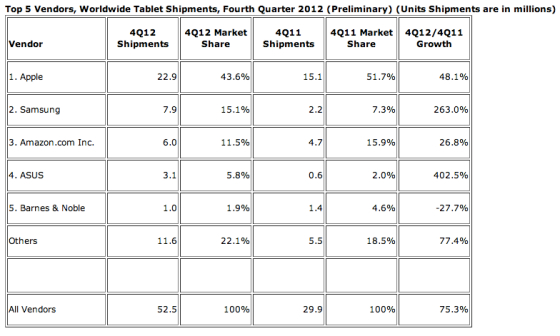