Hot on the heels of its fourth quarter earnings report yesterday afternoon, Facebook has announced The Facebook Card, a new part of its online Gifts platform intended to be yet another revenue stream for the social network. What makes the Facebook Card different from any old gift card is that you can gift somebody money to multiple stores on one card. For example, you could give a friend $50 to Target and $50 to Sephora without giving them two separate cards — and all Card balances are manageable through Facebook's mobile app. 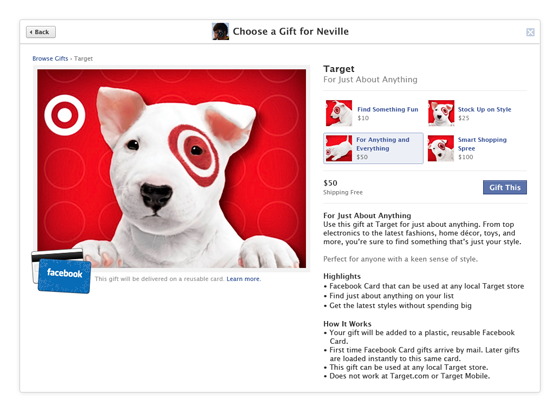 The Facebook Card can be purchased just like any other Facebook Gift through facebook.com, but it only lets you gift money to Jamba Juice, Olive Garden, Sephora, and Target initially. Once you've sent a Card to a friend, they'll receive a push notification, and be prompted to enter an address where the Card can be mailed. In contrast to earlier Facebook Gifts, like chocolates that you can purchase from an online catalog and have mailed to a friend, the Facebook Card gives the recipient an opportunity to pick whatever they want in real life. Facebook Cards, like Starbucks cards, can be refilled at any time — and once you have a Card, friends and family can add to it as if they were gifting you a new card. You'll receive a push notification whenever your balances change. 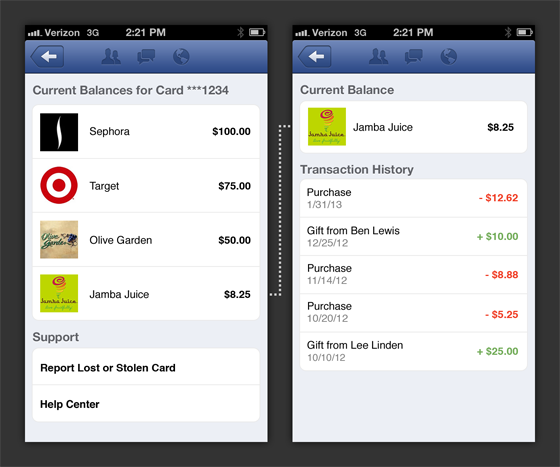 Facebook has made a very big push for Gifts, hosting a big event in NYC to celebrate its launch that ranks second behind only Facebook's Graph Search event in terms of scale this year. It appears that users aren't biting on the concept of gifting physical products online quite yet, however. Just $5 million of Facebook's $1.13 billion in total revenue for fourth quarter 2012 came from Gifts and Promoted Posts.

"I think [Gifts] can be great revenue opportunities longer term, but for right now it's about building out great experiences around these," CEO Mark Zuckerberg said on the company's earnings call yesterday. But since when is a physical gift card a "great experience" in the age of digital gift cards you can add to Passbook? Facebook Cards will become available to users "in the coming days," the company said.