In addition to its new Windows 8 tablet PC, Vizio is announcing a refresh to its lineup laptops and all-in-one desktops for 2013 that focuses on new internals, but appears to leave the same questionable industrial design intact. As Engadget reports, the new 14- and 15-inch Thin + Light laptops offer either an Intel Core i7 processor or AMD's high-end A10 chip and feature touchscreens for full control over the clean Microsoft Signature Windows 8 installation. The larger 15-inch laptop will feature 1080p resolution, while the 14-inch will have to make do with a 1,600 x 900 display — still a great resolution for a computer of that size.

As for the desktops, the 24- and 27-inch models are now known as the All-in-One Touch, just as we saw in our recent review, but the 24-inch model will also now be available with AMD internals as well as Intel. As before, both models will include 1080p screens and Microsoft Signature Windows 8, but there aren't any other details on what's new on the hardware front yet. 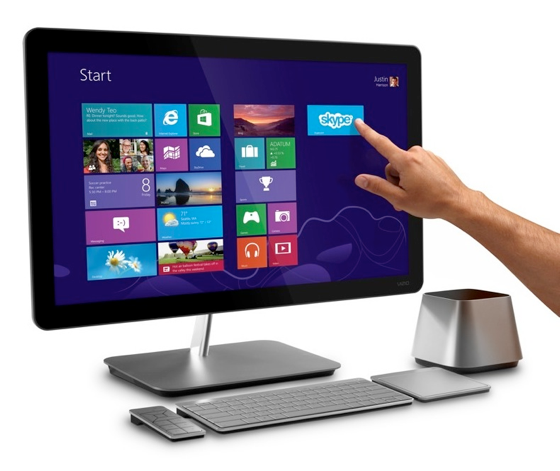 Unfortunately, what we do know is that the industrial design hasn't changed from last year's models, and that could be a major issue for Vizio. Both computers came with some of the worst trackpads and keyboard we've used in our extensive testing — and while that's less of an issue for the all-in-one, where you can swap out for your peripherals for choice, it was a fatal flaw in our reviews of the 14- and 15-inch models last year. And while you can swap out the peripherals on the desktop, we found the touchscreen to be a lowlight when we reviewed the All-in-One Touch — and you're stuck with that for the life of the computer. We've reached out to Vizio for more details on its 2013 computer lineup and will update this post with any new information we receive.