Nvidia has just announced the Nvidia Grid, an updated version of its GeForce Grid cloud gaming architecture that was originally announced in May of last year. The Grid is a rack-based server that can support up to 24 individual racks at once with a total 240 GPUs and 200 teraflops of processing power. The company boasts that this is the equivalent processing capabilities of 700 Xbox 360s.

In addition to showing off a few photos of the Grid servers, complete with internal shots of the rack's layout, Nvidia also demonstrated cloud gaming clients for Android tablets and the Xbox 360 that are powered by the Grid. The system has the ability to pick up the progress of a game even if you stop playing on one device and start playing on another. For partners, Nvidia announced that Agawi, Cloudunion, Cybercloud, G-cluster, Playcast, and Ubitus will be the first companies to test out the Grid system.

But it's more than games: It sounds like Nvidia's VGX is now also part of the the rebranded Grid, and it's about cloud computing for the enterprise as well as cloud gaming.

It's still not clear as to when customers will be able to play games powered by Nvidia's Grid platform, but we'll keep you up to date with it as we learn more. 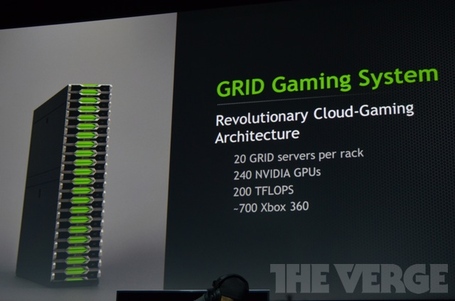 More from this stream Nvidia Shield: from Tegra 4 to portable game console