Sony's flagship phone for 2013 has just been revealed as the Xperia Z. This 5-inch Android 4.1 device comes with a 1080p display resolution, a 1.5GHz quad-core Snapdragon processor, LTE connectivity, and a brand new 13-megapixel Exmor RS camera sensor. In other words, it's specced to succeed.

The Xperia Z is unique among cutting-edge handsets in being water resistant to a depth of one meter, while also matching the Nexus 4 with glass on both its front and back. Protecting against water ingress does mean that there are plastic flaps over the Z's ports (including, annoyingly, the headphone jack), but you do at least get a microSD card slot, a feature that many manufacturers have started to omit from their devices.

Sony also remains resolutely committed to NFC and includes it on the Xperia Z as well as on a new portable Bluetooth speaker that's also being announced today.

The 13-megapixel camera on the back of the Xperia Z is notable not only for its all-new sensor, but also for introducing us to "video HDR." High dynamic range photography is typically achieved by splicing up to three images, shot at different exposures, to achieve one composite that combines the best-detailed parts of each. Sony's new smartphone is apparently agile enough to assess multiple exposures of a video recording and thereby deliver similar results with moving images. Additionally, Sony has caught up with the likes of HTC in allowing you to capture still photos while recording video, plus the new camera is capable of a 10fps burst mode when shooting 9-megapixel photos. 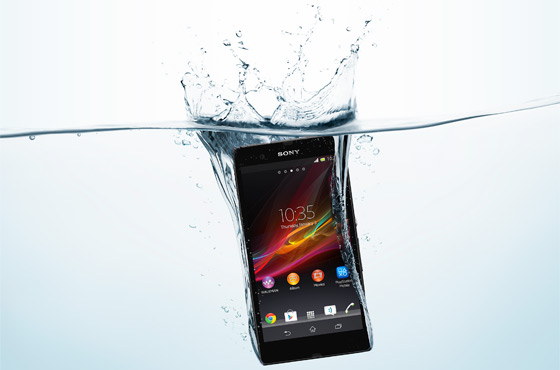 If there's one major disappointment with the Xperia Z, it's the handset's release date

The software side of things is fully branded by Sony, with things like ClearAudio+, Bravia Reality Display, and the Bravia Engine 2 all serving to enhance the device's multimedia output. My favorite new addition is a Battery Stamina mode, which automatically kills all background processes and apps when the screen is off, delivering "easily four times longer standby," according to Sony. It still allows you to receive calls and notifications from authorized apps, making it something you can use constantly without sacrificing functionality. That should work well with the Xperia Z's 2330mAh battery to ensure it doesn't suffer from the same endurance problems as we encountered with the similarly specced Droid DNA.

If there's one major disappointment with the Xperia Z, it's the handset's release date. Sony plans to begin distributing its new superphone in March at the earliest, by which time the shipping Android 4.1 OS will be close to seeing its version 5.0 announced. Retail availability could even slip further back into April, but when it comes, it should at least be global. An Xperia ZL variant will be made available in some markets instead of the Z, with the chief differences being the loss of the glass back and water resistance, a smaller footprint in terms of height and width, and a slightly thicker body.

More from this stream The best phones of CES 2013