Back in November, Samsung announced that it'd show off its first 4K TV at CES. Well, the company has followed through on its promise today — the 85-inch UN85S9 is the world's largest Ultra High-Definition TV, and has some pretty unprecedented industrial design. The huge screen is suspended within a metal frame reminiscent of an easel — it can be tilted up and down — and, while we're not sure how many living rooms the colossal contraption will fit into, the floating effect is a sight to behold. The frame holds a function, too; a 120-watt 2.2 speaker system that surrounds the display.

Picture quality is fantastic as well, but unfortunately Samsung told us that it has no plans to provide users with native 4K content like Sony is promising; instead, the company prefers to emphasize its upscaling algorithms. Elsewhere the set features Samsung's new Smart Hub software, S-Recommendation, and voice control, and the set is powered by a 1.35Ghz quad-core A15 processor. You'll also find standard ports such as 4 HDMI inputs and optical audio. Unfortunately we haven't heard any pricing information yet, but Samsung will release the UN85S9 in March. 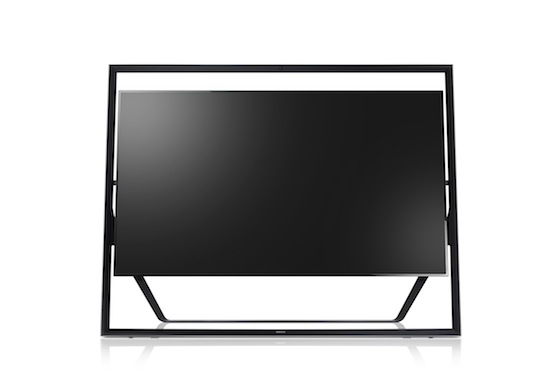