Share All sharing options for: BlueStacks teams up with Lenovo to pre-load Android apps on Idea-branded PCs

After launching a beta of its Android App Player for Windows last year, BlueStacks is announcing a partnership with Lenovo today to preload its software on the Idea line of consumer PCs. The agreement will see millions of PCs shipped each year with the BlueStacks App Player, software that allows you to run Android apps on a Windows PC. 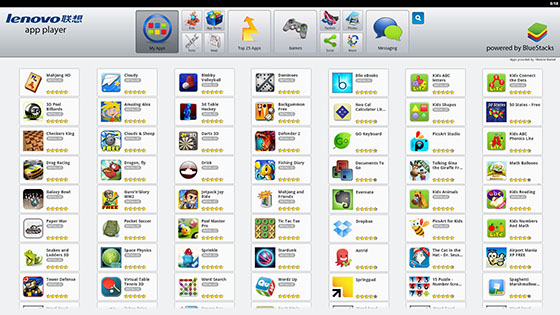 BlueStacks' latest deal follows a similar partnership with Asus last year with a six month trial to access around 50 apps. The Lenovo deal is clearly more significant for BlueStacks, simply because Lenovo is the world's largest PC maker. BlueStacks CEO Rosen Sharma recognizes this too, while promising future plans to roll out apps on Lenovo mobile devices later this year. "While this is the largest distribution deal we've struck to date, it is just the beginning of our work with Lenovo," he says. The agreement doesn't cover Lenovo's Think-branded PCs that the company recently split off the internal operations of to better compete with high-end manufacturers like Apple.

BlueStacks is also planning to unveil a new version of its App Player that's designed for Windows 8 ultrabooks, laptops, and tablets later this month which will likely launch just as Microsoft brings its Surface Pro tablet to market.