Alcatel has just announced a trio of new additions to its One Touch line of mobile devices, including what it claims is the "world's slimmest smartphone." The record-holding One Touch Idol Ultra is just 6.45-millimeters thick and features a 4.7-inch AMOLED display and 1.2GHz dual-core processor, while running Jelly Bean. Also announced was the One Touch Idol, which may not be as thin, but Alcatel claims that it's "the lightest smartphone in its category" weighing in at just 110 grams. It too runs Jelly Bean and includes a 4.7-inch display, though it's IPS as opposed to AMOLED.

Rounding out the new additions to the line-up is the 4G-capable One Touch Scribe HD (below). According to the company, the device is the first to utilize MediaTek's MT6589 quad-core, which should make the smartphone a solid way to enjoy graphics-intensive games and apps on a 5-inch screen. No word yet on when these devices will be available, but stay tuned to our coverage of CES to see just how long Alcatel manages to hold on to the "world's slimmest" crown. 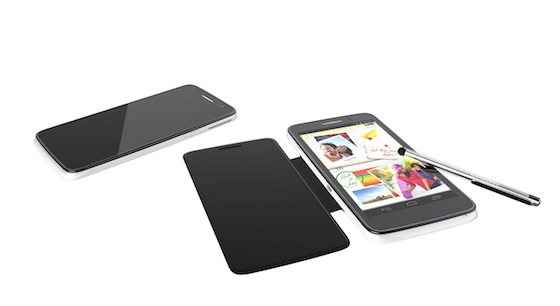