Nvidia has always been good at generating buzz, but what are Shield's chances in the real world?

A gray-haired but still leather-clad Jen-Hsun Huang ascended the CES stage last night to reveal what may well end up being the most audacious product announcement of this year’s show: Project Shield. The culmination of half a decade’s worth of research and development, Shield is a portable gaming console with no lesser an ambition than the root transformation of the way we play games. With it, Nvidia is hoping to do for gaming what Netflix did for movies or the Kindle achieved with e-books. Revolution, not evolution.

Now let’s talk about why Nvidia’s revolution will fail.

Before we even break Project Shield down into its constituent elements, it’s instructive to look at the product category it enters into: portable gaming consoles. This Sony- and Nintendo-dominated battleground has been shrinking at an increasing rate over the past few years, leaving even those incumbent leaders struggling to achieve traction with their latest generation of devices (the 3DS series and the PS Vita, respectively). Attempts from outsiders have fared even worse, and Nvidia must surely be aware that the route ahead of it is laden with the corpses of failed portable consoles. Nokia’s N-Gage and Panasonic’s Jungle are two of the highest-profile flops — and Project Shield bears an inauspicious resemblance to the clamshell Jungle, so much so that it could be called Nvidia’s version of that scrapped device.

In a mobile gaming market that is being taken over by devices whose primary purpose is not gaming, Nvidia is swimming upstream by introducing a portable that is all about gaming. This is where Jen-Hsun and Nvidia’s disconnect from current trends is most apparent. Through its Tegra line of mobile chips, this company has experienced first-hand the transformation of the mobile market, yet it fails to understand that gaming is nowadays treated as a high-value spec sheet item rather than the killer feature of a device. Who’s selling pure gaming devices these days, anyway? Even the venerable Xbox 360 and PS3 have gradually transformed into home entertainment hubs rather than simple interactive experience pushers. Project Shield is, to use a cliched but accurate analogy, skating to where the puck used to be. 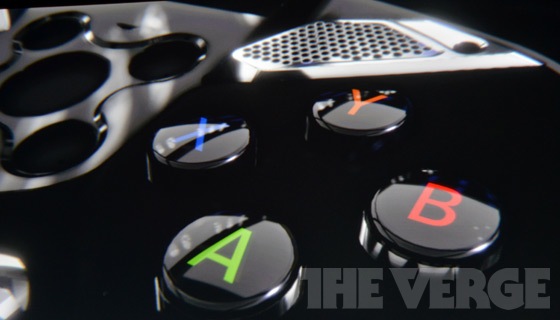 Of course, Nvidia would have you believe Project Shield is a whole lot more than a mere handheld console. Last night’s demos, plagued by connectivity issues as they were, focused on three core strengths: a stock Android experience replete with the full library of games, music, and movies available to the platform; the ability to stream your Windows PC gaming session to the console itself; and, finally, the power to output all that good stuff to your large-screen HDTV. Access to the Steam store was also featured prominently by Nvidia, but being able to stream from your PC makes that a bygone conclusion anyway.

Let’s look at each of Shield’s pillars of strength in turn. Streaming gaming sessions from your home PC to an Android device was actually one of Nvidia’s headline announcements from last year’s CES. Remember Skyrim being played on the Eee Pad Transformer? The demo, enabled by Splashtop THD, generated a lot of buzz around Nvidia’s booth, but the subsequent year hasn’t seen it translate into popularity among the mainstream of Android users. Going the extra length of obtaining a gamepad and setting up the seemingly straightforward connection between their PC and tablet seems to have been that extra inch too far for most mobile gamers.

Streaming video from your mobile device to a TV is also far from a brand new feature. That takes us back to CES 2011 when Jen-Hsun was on stage playing Angry Birds on an LG HDTV.

Finally, running stock Android is a desirable feature when squared up against the growing cadre of 5-inch Android devices with rarely helpful interface skins, but it’s nothing special in the tablet space where most slates run the default Google software.

To Nvidia, Project Shield represents a neat confluence of the multiple strands of diversification the company has been pursuing over recent times: GeForce Grid to make remote Windows PC gaming possible, Tegra Zone as a game store destination, and other peripheral enhancements like DirectTouch. Rather like Microsoft with Surface, Jen-Hsun Huang’s company has decided to stop providing the core elements of a good mobile device and sought to build one itself. 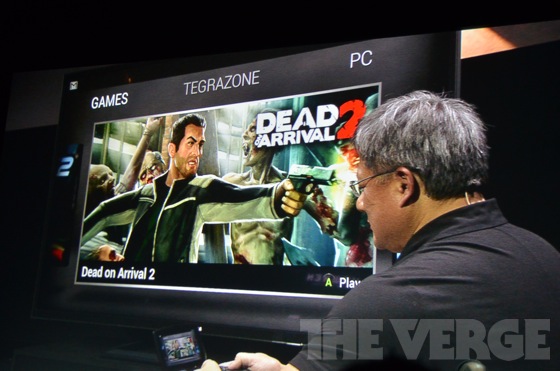 The problem Nvidia faces is that, for the rest of us, Shield is bold, blusterous, and just crazy enough to attract our attention — but not something sufficiently unique or groundbreaking to make us feel we need to have it in our lives. It’s a compendium of Nvidia’s best ideas, sure, but there’s no evidence of them having worked out in the past, and the whole market seems to be moving away from openly gaming-centric devices.

Project Shield is undoubtedly the product of a lot of hard work over the past five years, for which Nvidia’s engineers and designers deserve credit. Unfortunately, much of the appeal of a dedicated handheld console has worn off over the last lustrum, leaving Nvidia fighting for a title that nobody may truly want anymore.

More from this stream The best of CES 2013