At the 2nd Screen Summit during CES, 'Smart TVs' get a bad rap

"I have a fundamental belief that the 10-feet UI as a concept sucks and is broken," says Jeremy Toeman, Dijit CEO and creator of NextGuide, a modern TV guide app for iPad. "It doesn’t matter what kind of lipstick you put on a pig." Toeman spoke yesterday in Las Vegas at the 2nd Screen Summit, a group of marketers and executives bent on invading your iPad screen while you watch TV. While that might sound scary at first — Toeman’s software works a lot better than your service provider's "GUIDE" button for finding upcoming Bill Murray movies. Adding gestures controls to your TV isn't going to help.

"You end up watching Karate Kid 3 — with commercials — and in SD. It’s what we call ‘sub-optimal.’"

The biggest problem in TV today may be accessing your cable content legally on the go, but yesterday, the focus was on discovery — on exposing Comcast and Time Warner’s TV guides for what they really are: relics of an age past. "It takes the average person eight minutes to find something to watch when they sit down," says BuddyTV CEO Andy Liu. "You end up watching Karate Kid 3 — with commercials — and in SD. It’s what we call ‘sub-optimal.’" NextGuide and BuddyTV aim to help you find something to watch in less than twenty seconds, which is quite possible, since the apps bring in customized content from services you’re subscribed to like cable, Hulu Plus, Amazon Instant Video, and Netflix. NextGuide even plugs in to Hulu’s clip library, meaning a search for Bill Murray brings up clips of his appearances on SNL, as well as Groundhog Day showings on TV. The goal is to tear down the boundaries between TV and other kinds of video entertainment, since after all, when you sit down in front of the TV you're really just looking to be entertained. 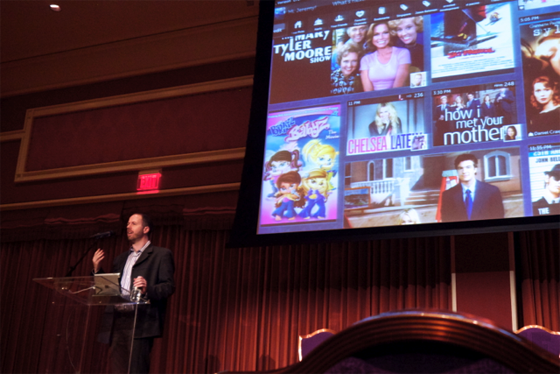 Why rely on slow and sluggish TV guides to help you find stuff to watch, when a quite capable computer is likely already on your lap? All the processing power you’d ever need is inside a tablet — something 40 percent of American households own, or a smartphone, which 52 percent of households own, according to CEA SVP Jeff Joseph. And these gadget owners are using them while watching TV. Two thirds of HDTV owners are social networking and browsing the web while watching TV, Joseph added. Yet, across the strip, Samsung demoed its line of "Smart TVs" which can be upgraded every year for hundreds of dollars if you want the latest user interface updates. While DISH's new Hopper DVR is clocked at 1.3 Ghz, it feels nothing like using your phone. And in most cases, you’ll be controlling these already-subpar "TV apps" using a legacy remote or oddball futuristic remote, which pale in comparison to interacting (and especially typing out search queries) with a tablet or smartphone. "Companies like Samsung and LG demonstrate their 'Smart TVs' with clunky 'app stores' and sub-par Netflix UIs, a few feet away from their latest washing machines," Paul Miller wrote.

"Smart TVs" and dumb cable boxes are two sides of the same coin, built by companies "out of their element," Toeman says. "It doesn't matter how good the technology is in a set top box," admits Jimshade Chaudhari, Director of Product Marketing and Management at DISH network. "It's much easier to use an iPad or iPhone." DISH this week announced the addition of Sling technology to its Hopper DVRs so subscribers can access live content when using a smartphone, tablet, or computer. Even Apple hasn't quite figured out how to use a remote to control a TV. "What's the best part of the AppleTV experience?" asks Toeman. "Most people say AirPlay. Why? Because you're in control of it with your finger."

While little news was announced at the 2nd Screen Summit, It’s never been more obvious that "the future of television has arrived, and it’s called the iPad." iPads decorated press materials for every company, and just about every suit attending the event was donning an iPad and tapping away furiously during the event. "TV is a broadcast system, and as such needs to cater to the lowest common denominator. It’s biggest advantage is reach," says Georg Petschnigg, who founded Paper developer FiftyThree, worked closely with Microsoft’s Xbox team, and even once worked on a channel guide system for Bell Labs. "Xbox and iPhone can break out of that and drive for a high-end user experience." Perhaps it’s time for TV manufacturers to give up the content discovery side of their guide interfaces and focus on building the best hardware. Let's leave finger tapping interfaces to the software experts.