This year's 'exclusive' Digital Experience was a tribute to the American experience, complete with faux cheerleaders and gridiron heroes

Share All sharing options for: The delicious snacks of CES: tradeshow tailgating

Trent Wolbe will be publishing daily photo essays from CES. This is the next in the series.

Hereâs the deal yâall: I love Las Vegas. Itâs got a history as checkered and weird as America itself, there are sick-ass laser lights beaming at you from every facade and orifice, and most importantly, it doesnât give a fuuuuuuuuck what you think about it! Pretense of artfulness or a higher sense of purpose are difficult to come by here: everything is distilled down to the godless instant-gratification triumvirate of gambling, sex, and buffet dining. Whatâs not to love, hater? 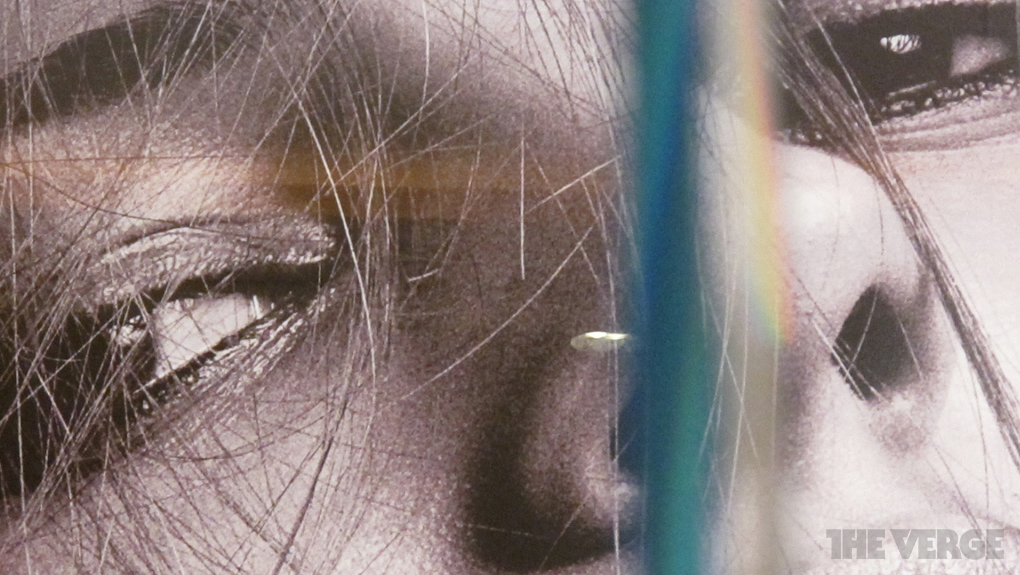 It had always confused me why so many people I know hate on Vegas so hard. Today I realized it’s because most of my friends with opinions on the matter are technology journalists who spend all their time here slaving away over hot laptops to bring you the latest tech tidbits, not strolling down the boulevard and taking in the sights and smells. Just look at all these blogosphere elites lining up like so many cattle at the trough to get into Digital Experience, the confusing micro-show that takes place on the eve of CES. 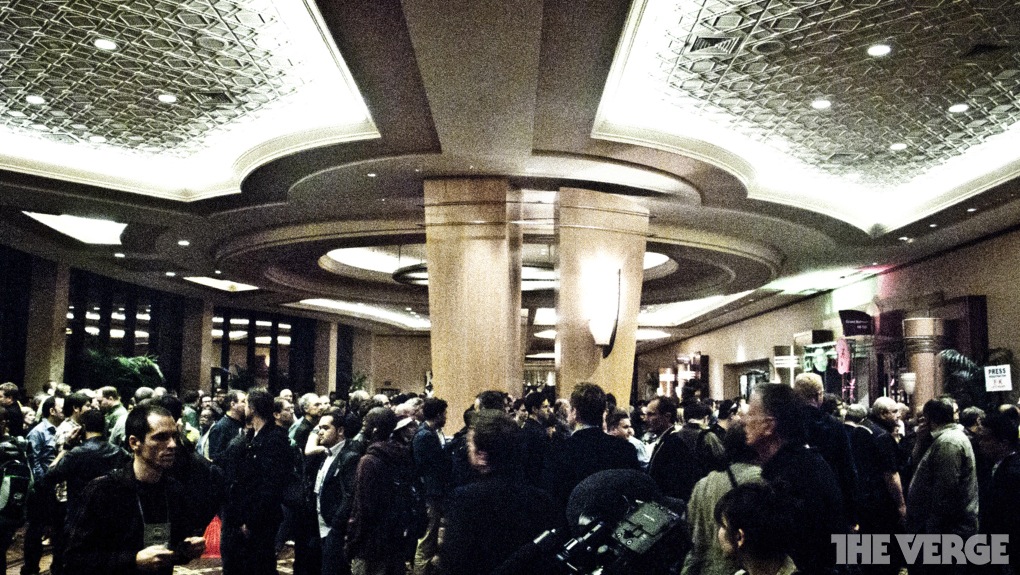 Part of the sick pleasure I derive from CES is trying to decipher the oddly generic branches of Americana that Digital Experience adopts as its theme each year, like “50’s retro diner” or “technology rodeo.” This year was a tribute to the American tailgating experience, complete with faux cheerleaders and gridiron heroes, brand ambassadors pushing Gorilla Glass bottle openers and baggies of football-shaped chocolates to already-weary bloggers jonesing for new news, fighting the shakes with a never-ending flow of alcohol and hot sliced beef. 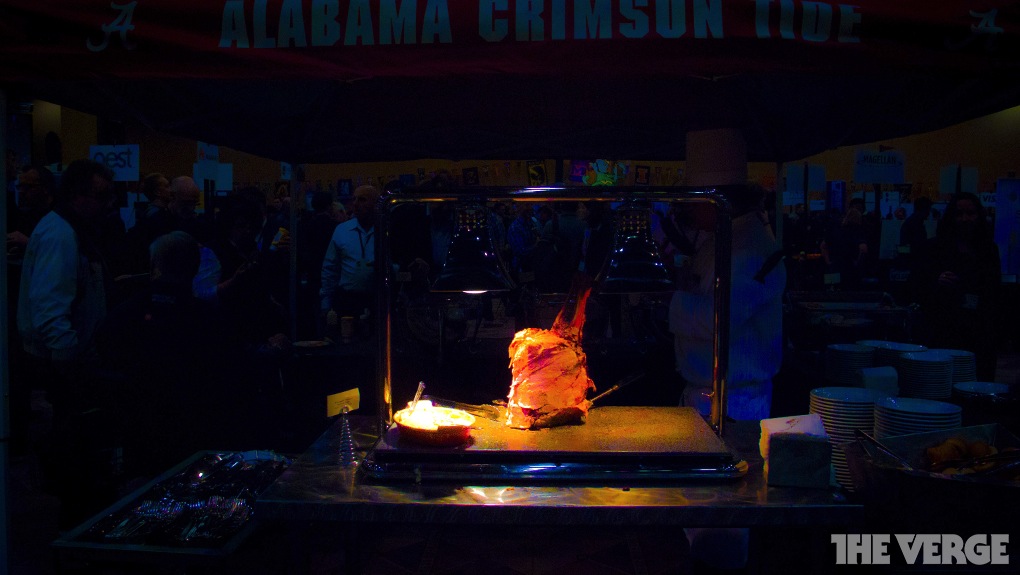 I guess it’s an attempt to hang some sort of historical-emotional weight on what is otherwise a pretty lifeless event held in a dingy mauve ballroom at the MGM Grand Hotel. The layout is almost identical every year, like an overbearing Costco of familiar brands showcasing familiar products. I have mastered the subtle technique of averting product representatives’ hopeful gazes, ready to lock eyes with any attendee that makes the mistake of looking their direction. In the unfortunate event you get caught in that ocular force field you’ll almost always be sucked instantly into a pitch for a new product with a bland new take on an already-tired trend. 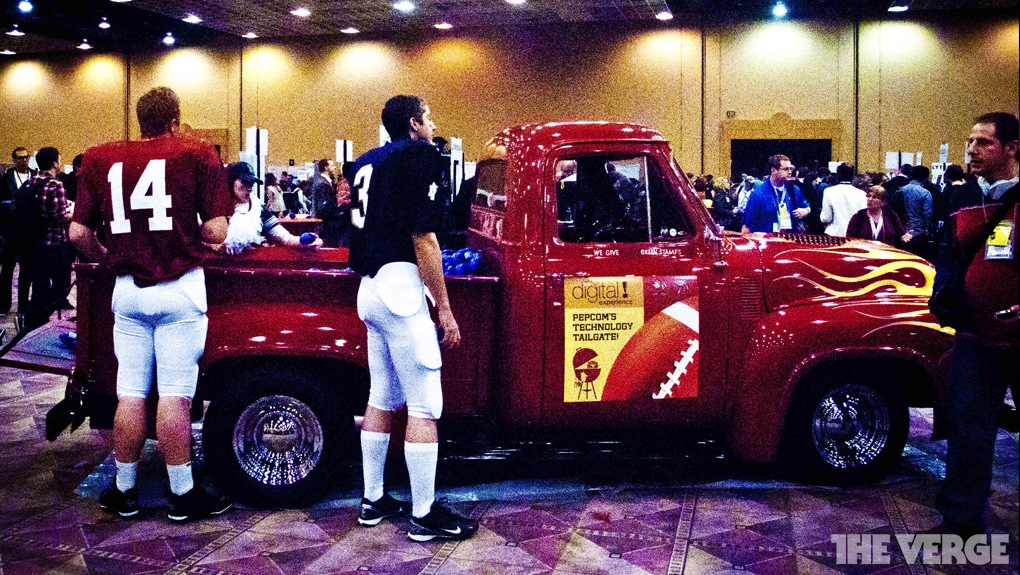 The one time I let my steely gaze drift I was ambushed by a goatee’d representative for a “Flipboard competitor” with a specialized algorithm for social news gathering. Unfortunately for the rep, who was just trying to do his job, I don’t use Flipboard, I don’t think the world needs another social news gathering tool, and, worse, I’m really bad at disguising my contempt for boring new software. He could sense my heart growing colder as he pitched and, in a valiant attempt to score a new media ally, he offered me exclusive beta access to the product (I wasn’t interested) and, finally, the chance to win the Samsung LED display at his booth because it was cheaper to buy than rent it and they needed an efficient way to unload it after the event ended. While my brief relationship with the rep ended amicably, the whole thing left me feeling like a mostly-empty jar of Hellmann’s left to sour on the kitchen counter: tapped-out, tepid, and slimy. I speed-walk-of-shamed to the nearest chili bar in a hopeless attempt to cleanse my soul of the aborted hookup. 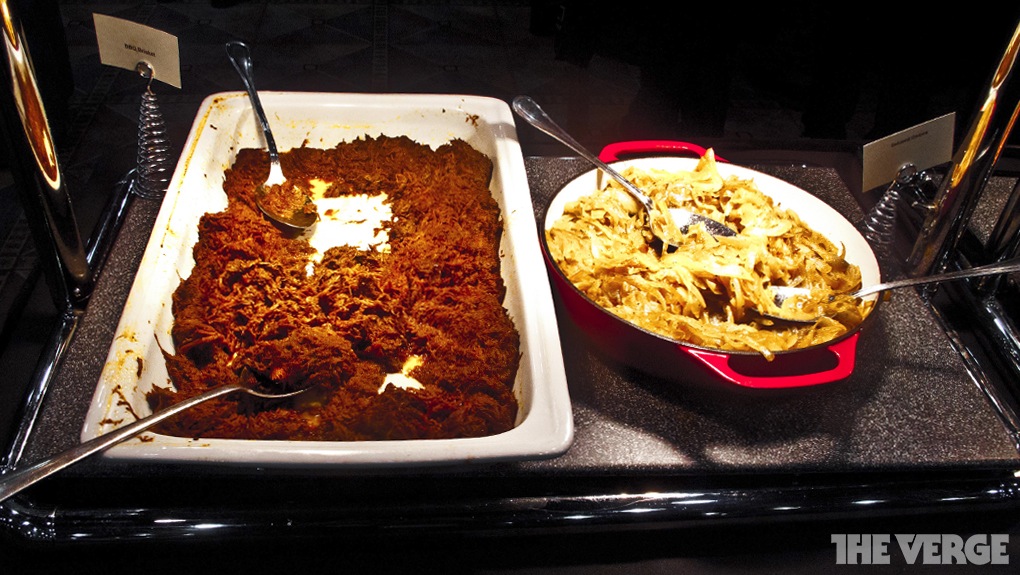 After mopping my plate of bean slop with undercooked cornbread and washing the grease down with a Crimson Tide Martini from the Western Digital-sponsored ice bar I hesitantly resumed my stroll through the meat market. I saw The Wall Street Journal’s Walt Mossberg looking, as he does every year, profoundly pissed off at the circus unfolding around him. I respected the age-old tradition of having the “I can’t believe we’re here again” conversation with my fellow veterans. I frowned out loud at the DJ who couldn’t remember the sponsor he was supposed to shout out (“allright all y’all tailgatin’ party people, let’s give it up for...uh...[awkward silence as DJ turns to read Jabra banners hanging behind him], Jaw-bro!” [no crowd response]). In a different situation, I would have broken down in tears of confusion when the next bartender I approached told me they were out of ginger ale and that he would have to “make it from scratch,” but the tailgate party had sucked my emotions and tear ducts dry, leaving me to shuffle zombielike, warm Miller Lite in hand, past the Brookstone booth and toward the exit. 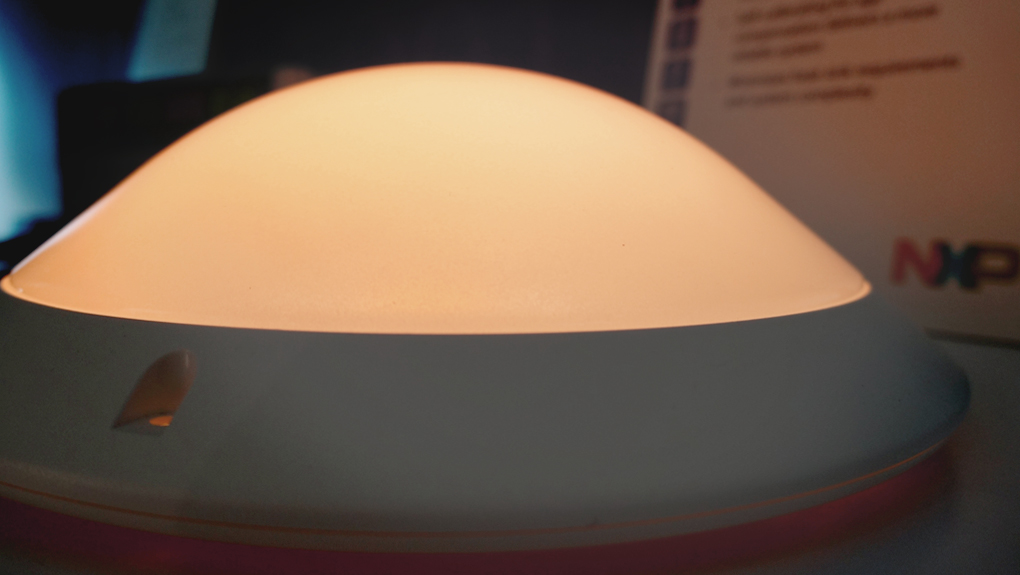 Just before the darkness within completely obscured my vision I saw a light. It was a warm light and it stirred the smoldering embers of my heart’s furnace and I knew I had to approach it if I wanted to escape the ballroom with even a shred of self-respect. I weakly scanned for the pair of eyes nearest the light and caught the smiling face of Dr. Radu Surdeanu, senior research scientist for the Dutch semiconductor manufacturer NXP. 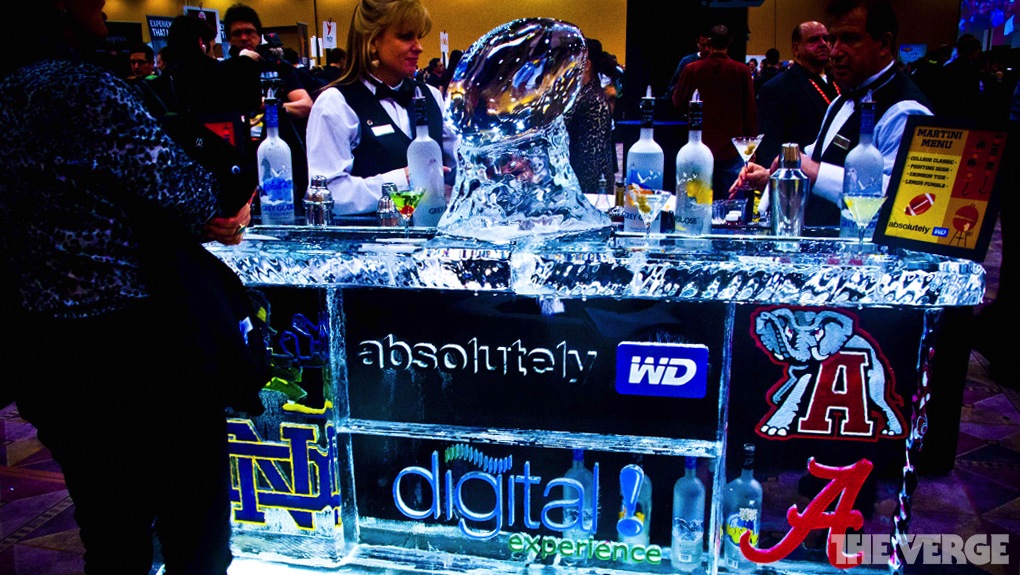 His light was a prototype attached to a chunky voltage controller like the kind you might see in a laboratory. As he turned its knobs the lamp dimmed seamlessly into and out of darkness and I realized why it had drawn me in: it seemed to have the exact color quality as my bedside halogen lamp, which provides a buttery glow at low power and steps infinitely into a sun-bright white as it approaches its peak. But NXP’s light is an LED that draws a fraction of the wattage its incandescent ancestors do. 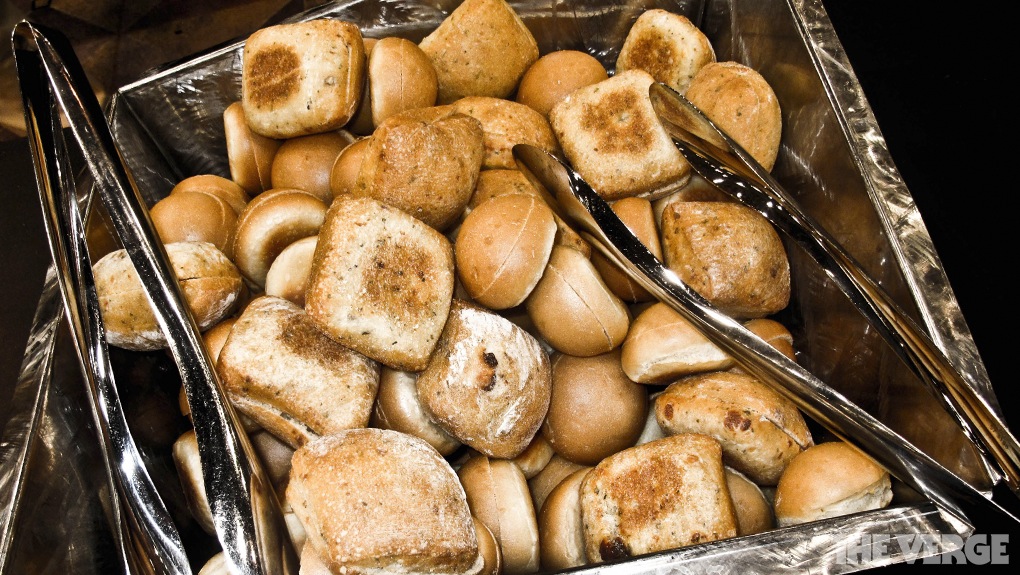 So what, exactly, was its subtle trick? The biggest consumer complaint about dimmable LEDs is that they don’t change color temperature as they get brighter. This means that they retain the same sun-white color at low power as they do at high power; end users interpret this behavior as coldness, and often abandon dimmable LED to return to the friendlier-feeling incandescents. There are ways to correct for this, but they’ve always required a massive heatsink (Audi’s R8 uses LED headlights with three fans to disperse heat) and expensive external temperature monitoring systems (NASA recently completed an $11 million LED-enhancement retrofit on the ISS because astronauts were experiencing seasonal affective disorder from the lack of full-spectrum light). 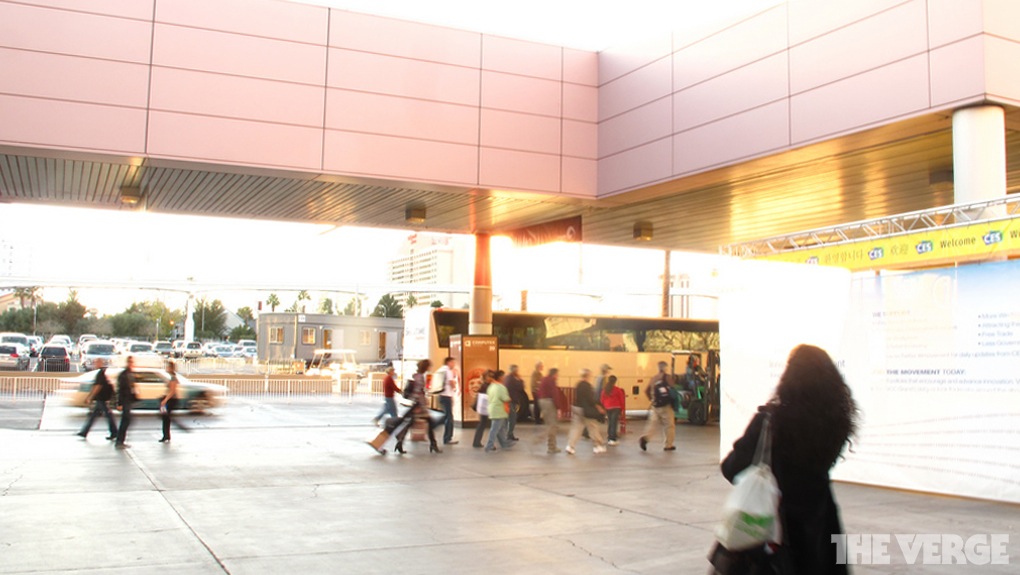 Dr. Surdeanu’s innovation is to embed the temperature sensor within the LED itself, allowing the onboard chip to blend accurately between amber and white. Those precisely-blended colors, moving along the black body radiation curve (good band name), make consumers like me feel happy when they see it dimming up and down because it has the same warmth as an incandescent. The embedded sensor also cuts the size of the heat sink dramatically, which will hopefully mean affordable, warm, and friendly dimmable LEDs at your local Home Depot sometime this year. 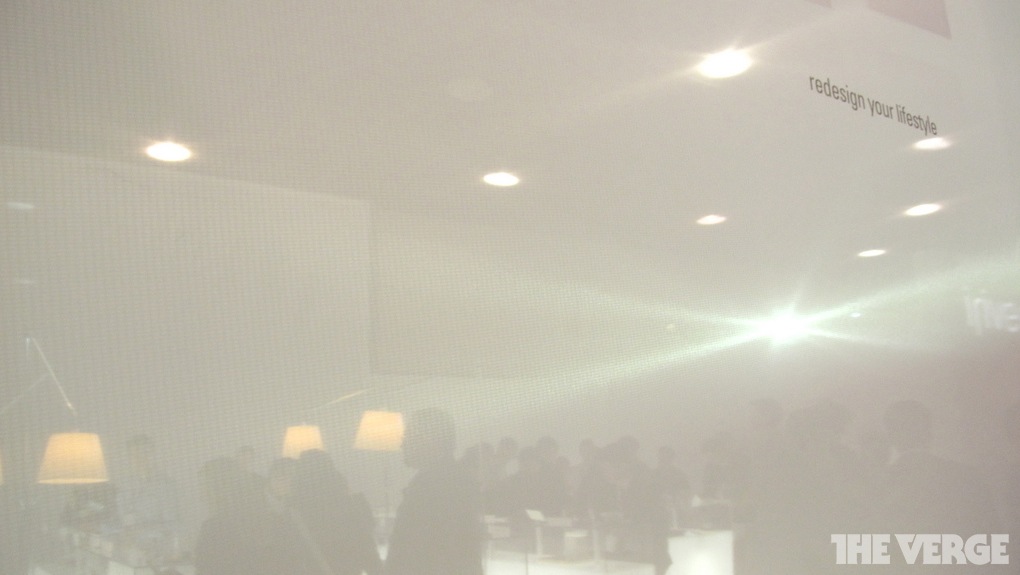 Like all truly interesting products, Dr. Surdeanu’s delicately-designed light didn’t require a pitch. There was some mystical deus ex machina that drew me to it at the right time of the night, a magnetic soul powered by the vision and dedication that was invested in its creation. NXP’s light was the vibrant needle in the overwhelmingly-dead haystack of the tailgate party. Like the one beautiful co-ed that kept me waking up for my dismal 8AM freshman psychology class, it’s experiences like these that bring me back to Vegas every January. 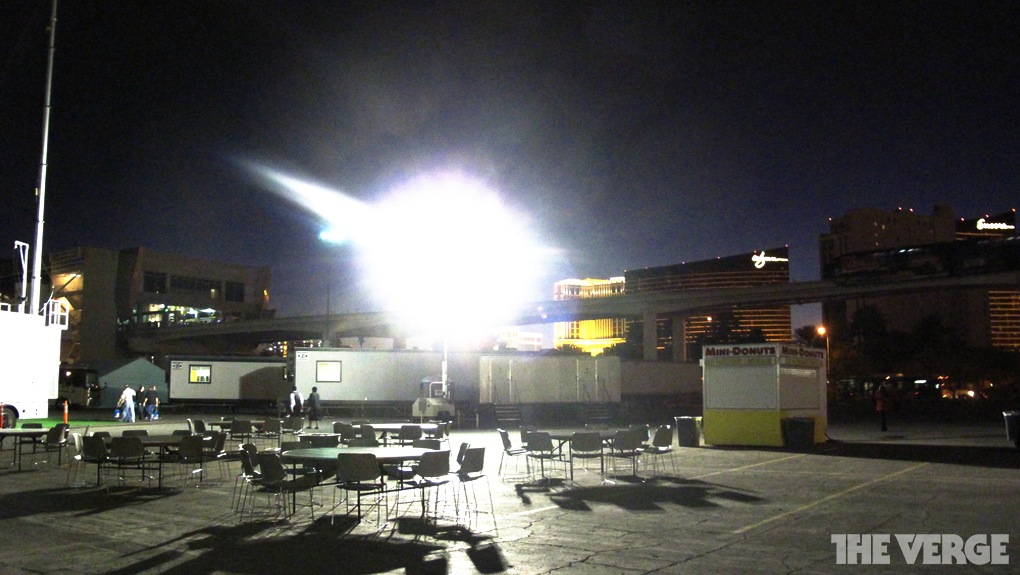 It’s not a coincidence that the single most important company in the consumer electronics ecosystem has had the smallest presence at the Consumer Electronics Show. Before it was an institution, Apple was a cultish diamond in the rough — a light that people were drawn to because they liked it intrinsically, not because Woz offered them a martini and a chance to win a free TV if they demoed it.