What it's like to drive a 1600-pound mechanical spider

What it's like to drive a 1600-pound mechanical spider

Today I was lucky enough to experience driving the Mondo Spider, a 1600 lb, five foot-tall and eight foot-long mechanical spider powered by hydraulics. The spider was built in 2006 by eatART, a non-profit in Vancouver, B.C, and can move at up to four feet per second. The spider used to run on gas, but was retrofitted in 2009 with a 5 kWh Lithium Ion battery, so like any Chevy Volt, you only need a wall outlet to charge it up. "It is the world's first zero-emission walking vehicle," eatART claims. Lenovo loved the Mondo Spider's appeal as a statement about energy consumption, and shipped it up to CES this week.

Driving the Mondo Spider is exhilarating, but also a bit scary. Gears and hydraulics pulse and buzz at your ears as you push and pull on the two skull-topped throttles. The Spider operates just like a tractor, meaning each throttle controls one side of the vehicle. Both throttles forward propel you forward, and both throttles back send you backwards. Putting either throttle forward and the other backward rotates you laterally. It's surprisingly intuitive, and took no time at all to pick up. It also felt shockingly safe. I expected to at some point fear for my life (or for the life of others), but that moment never came.

Riding the Mondo Spider made me want to scare children

I immediately recalled the enormous mechanical spider from the movie Wild Wild West, which ferried about villain Dr. Loveless. Riding the Mondo Spider made me want to scare children. EatART principle designer Charlie Brinson agreed, and revealed that scaring children is sometimes the goal, if it can get them thinking about the energy crisis. It's also about "learning to become one with the machine," as Brinson says.

I imagine that once humanity progresses far enough to build war mechs, it'll feel something like this. Or maybe that vision of the future isn't so far off — eatART is hard at work on Prosthesis, a four-legged stand-up "walking machine" scheduled to be built in mid 2013. I'd expect it'll take quite some time to build, however. Mondo Spider is the result of hundreds of thousands of house of volunteer work. Until then, a mechanical spider will have to be entertaining enough. 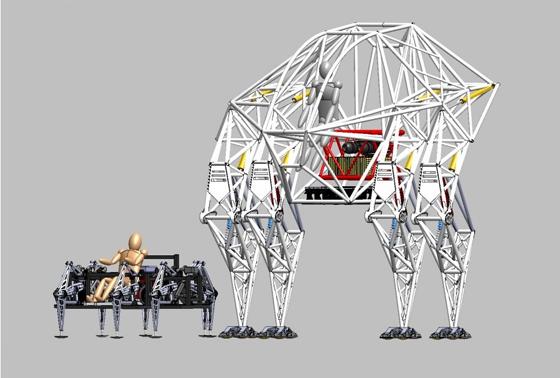 More from this stream CES 2013 gets weird