"The best smartphone is from Huawei. Not from our competitors."

Bold words from a bold guy. Huawei's chairman and CEO of consumer electronics Richard Yu didn't leave much room for doubt over his intentions when announcing the Ascend Mate and Ascend D2 smartphones today — the company truly believes its new products can compete with the likes of Apple and Samsung on quality while offering lower prices. But US carriers have so far been reluctant to accept the prospect of high-end smartphones from Huawei; last year's Ascend P1 was a solid device, for example, but failed to get any traction. I sat down with Yu to find out more about Huawei's plan to take over the world.

"We have our spirit. It's very important."

"In the past people understood that the best products came from Apple or Samsung," Yu told me. "We want to change this so that people understand that the best products come from Huawei. That's my target." Yu believes that his company is uniquely placed to offer high-end products around the world, thanks to Huawei's two decades of experience in the telecoms industry and what he calls the "Asian hardware advantage." Yu also argued that Huawei is stronger in software than competitors from Korea and Taiwan, and blends "European" design into the mix. "We're a globalized company," says Yu, "so that's why we can do better. And behind all that, we have our spirit. It's very important."

Huawei is primarily known for its low-cost handsets right now, but the company plans to compete on price with its high-end devices as well. Yu told me that although the cost of manufacturing on the Ascend Mate is roughly the same as something like a Samsung Galaxy S III, the company is willing to sacrifice profit margins to offer a cost advantage of around 20 to 30 percent. Yu called out the Galaxy S III in particular for not using particularly high-end materials, saying "their plastic is very cheap."

"The US Government is an influence. It gives some noise."

So if Huawei can create quality products at affordable prices, why won't US operators bite? Yu says that he "needs some time for the US carriers to accept high end [products] from Huawei. We're early in the US market, but maybe [there are] some other reasons like trust, for the carriers. The US government is also an influence — it gives some noise."

The company has come under scrutiny in the US of late, with a Congressional report recommending against using Huawei products because of a so-called threat to national security — though a later investigation reportedly found no evidence of danger. Yu says that Huawei is attempting to make up ground, but doesn't know how long it will take. In any case, he doesn't believe that product quality is an issue. "Actually, (the carriers) like the product. The product is good enough. We need relationships with the carriers. We need some time to get trust. I don't know how much, but we are trying." 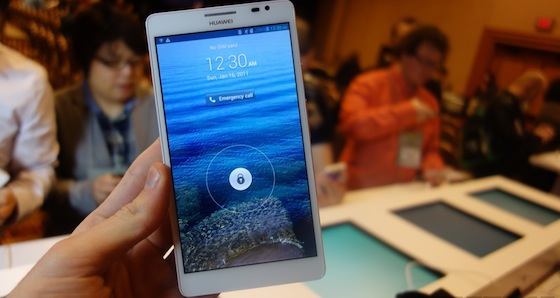 Build quality and competitive pricing don't count for much if the products don't appeal in the first place, and I had to ask about the thought process behind introducing the biggest smartphone ever made. At 6.1 inches, the Ascend Mate's screen is impossible to cover with a thumb when the phone is held one-handed, and it dwarfs the 5-inch Ascend D2. Yu thinks the phone is a "comfortable size," however, pointing to the one-handed mode that shrinks the keyboard, the relatively compact design, and the curved back that makes it "more comfortable than the Galaxy Note." After using it for ten minutes or so, I had to admit that it's a lot more comfortable than I expected, though it won't be pocket-friendly for everyone. Yu didn't seem to have a problem, however, happily slipping the Mate into his pocket and strolling around the room.

"Steve Jobs is gone. Now there is a lack of innovation."

Yu went so far as to say that even 5 inches is "too small" for comfortable video and email viewing, though the D2's screen is higher resolution at 720p. This was for cost reasons — as Yu laughs, "I think HD is good, but full HD is too good!" He's clearly proud of Huawei's latest phones, saying they can go up against the best from the likes of Apple. "Steve Jobs is gone. Now there is a lack of innovation."

More from this stream US government claims Huawei and ZTE pose a risk to national security: the accusations, responses, and fallout