Codecademy teaches users to work with APIs from YouTube, NPR and more

Codecademy teaches users to work with APIs from YouTube, NPR and more

Since it launched last year, New York startup Codecademy has helped to fill the huge demand for computer science education with free online courses in programming languages like Python, Javascript, Ruby. Today the company introduced a new set of classes focused on the API — application programming interface — a protocol that allows different pieces of software to communicate with one another. An API is how developers pull Foursquare check in locations into their mobile apps, or build browser games that can hook up with your Facebook profile.

"This is part of our continual belief that the best way to learn is by creating," said Codecademy founder Zach Sims. "Using APIs simplifies many projects by allowing users to bring building blocks together and to build on top of others' infrastructure." Starting today users can learn how to work with the APIs of Codecademy partners like YouTube, NPR, Soundcloud, and Twilio. "This is just the beginning of working with APIs for us," says Sims. "We're going to start working with lots more companies after this release." 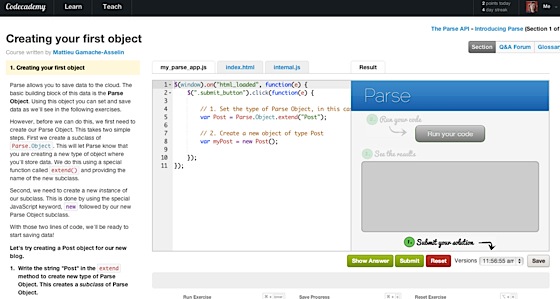 Sims was inspired to work with APIs by the success of other New York startups. "When I worked at GroupMe before starting Codecademy, it always amazed me that the company started at a TechCrunch Disrupt hackathon. Its founders somehow built an awesome group texting application in less than 48 hours! How'd they do it? They built on top of another company's technology - Twilio, in this case - and used it to build an app of their own. APIs make it easy to create things - to make things that interface and interact with the real world and the technologies in it. For Twilio, this means interacting with phone numbers. For YouTube, it's with videos."

And the lessons aren't just for noobs. "It's often hard for developers, even professional ones, to get up to date on the latest APIs and to learn how to use them. Dense documentation makes it nearly impossible to pick up an API and start programming immediately," says Sims. "These new Codecademy lessons are designed to be as helpful to experienced developers as they are to total newbies."