Yesterday, we discovered that Intel had exaggerated about how powerful and efficient its latest low-voltage processors could be — going so far as to invent a new metric, "Scenario Design Point," to explain the discrepancy away. Well, we just spoke to Intel's Dave Salvatore and Edrick Wong in detail about what SDP really means, and why the company chose to shake up the spec sheet.

TDP is all about how much cooling you need

First, a brief refresher: Before now, the lowest voltage Intel laptop processors had a 17-watt TDP, and could go down to 13W if a laptop or tablet manufacturer needed. TDP doesn't directly refer to the amount of power they draw, but rather how much cooling they require to dissipate heat. At an Intel event in September, the company promised that we'd see 10W Ivy Bridge chips, and the world mistakenly believed that Intel was still referring to TDP. At the time, there was no other common metric. This week at CES 2013, Intel's PC boss Kirk Skaugen took the stage to tell us that Intel had surpassed its goals — the new Y-series Ivy Bridge chips would run at just 7 watts. But it turned out Intel wasn't referring to TDP anymore. Instead, that 7-watt figure referred to a new "Scenario Design Point" (SDP) measurement. The so-called 7W parts actually have a TDP of 13 watts, with only one chip actually reaching the original 10W TDP goal.

Surprisingly, that doesn't mean that we won't have thinner laptops, tablets, and convertibles, though. Intel can actually limit these processors to 7 watts permanently, so that manufacturers can build thinner designs to suit.

So what happens when these chips run at 7 watts? They're slower, of course.

Today, Intel confirmed to us that though chips like the new Core i7-3689Y run at their advertised 1.5GHz in a system with 13 watts worth of cooling, and turbo up to 2.6GHz when things stay cool enough to do so, they're much slower at stock clocks. At 7 watts, Intel told us, the Core i7-3689Y runs at only 800MHz by default. Here's a crucial note, though: Intel tells us that the processor can still turbo up to that same 2.6GHz when the cooling system has available headroom.

Moving the power / performance ratio up and down depending on the load isn't anything new. It happens all the time even in existing Ivy Bridge chips. When you're not using a processor's full potential, it runs slower, by switching to a lower clockspeed: 800MHz actually happens to be a fairly common base frequency for low-voltage laptops today. "To save power at home, you want to turn off as many lights in as many rooms as you can… if you're not in the room, turn your lights off!" Intel's Dave Salvatore quips.

It's merely important that you can quickly make that processor faster again, and keep it fast enough to handle demanding tasks for extended periods. What happens at 7 watts, Intel explains, is that the CPU can't turbo up to a high speed as often, or for as long, before the system heats up beyond the computer's ability to cool it down. It could be harder for a laptop or tablet designed for a 7-watt processor to play long, demanding game sessions, render unoptimized video, or other things that typically heat a device up.

So what is SDP? 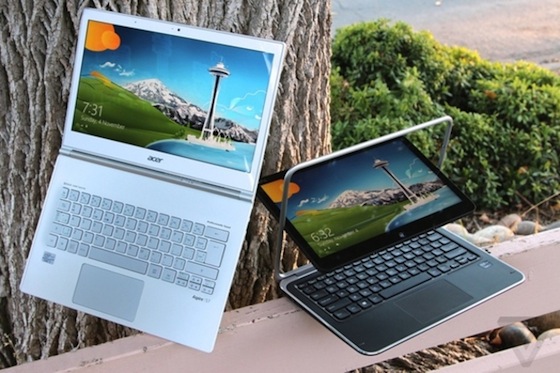 "As we looked at new form factors, particularly new ones that are really tablet-like, it became clear to us that TDP wouldn't be the right metric to describe the power metrics for those devices," Salvatore explains. Intel believes that with these new touchscreen designs, thinness and battery capacity can trump the ability to harness raw power for extended periods of time. Intel wants to offer manufacturers the flexibility to only have 7W worth of cooling in a tablet to make room for thinner frames and lesser weight, or bigger batteries, and thus the 7W SDP spec. Intel's selling a chip that it belie As laptop reviewers, we actually have to agree: we've reached a point where those things can be the difference between usable and unusable touchscreen machines.

What we still don't agree with is the misleading marketing. The base frequency of a processor doesn't mean as much as it used to, but that doesn't mean it's okay for Intel to say an 800MHz chip runs at 1.5GHz by default. That doesn't mean it's okay to allow manufacturers the opportunity to use that 7W figure to suggest their devices have longer battery life than they actually do.... even though Intel tells us it actually has reduced the idle power by 200 milliwatts across the board compared to existing chips.

In the end, it's still misleading marketing

And the intriguing thing is, all of this SDP confusion seems to have been totally unnecessary. Intel's previous Ivy Bridge processors were already able to push their TDP up or down depending on how much cooling a manufacturer included in a device, down to 13W when necessary. (Intel says the new Y-series can't push TDP up.) If Intel and its partners have the ability to make 7W a hard limit for thin touchscreen machines, why not just market and sell 7W TDP and 13W TDP chips separately rather than 13W TDP chips that are also technically capable of the lower wattage and frequency? Intel's done exactly that for years, and even today it sells 45W, 35W and 17W parts for different types of laptop. Intel told us that it's about "intellectual honesty," and allowing its partners the flexibility to use the chips in multiple ways. For instance, large shipment of 7-13W chips (just like existing 13-17W parts) could be repurposed for different types of designs long after a manufacturer plunked down the cash.

Honesty is a tricky thing. What's honest for Intel's partners isn't necessarily honest to computer shoppers like you and me. The upshot is that we'll probably have thinner, lighter, longer-lasting laptops soon, but we need a new metric — and it's not SDP.