Microsoft might not be at CES this year, but that hasn't stopped the company's CEO from jumping on stage to pass the annual keynote responsibility over to Qualcomm. While its OEMs are out in force with crazy Windows 8 designs and unreleased hardware, Microsoft is preparing its next step in the Surface family — Surface Pro. I got the chance to take an early look at a pre-production Surface Pro unit today, read on for everything you need to know about Microsoft's next tablet.

Similar to the Surface RT, Surface Pro takes advantage of a built-in kickstand and Touch Cover / Type Cover combo to provide a tablet / notebook hybrid of sorts. This time Microsoft has angled the device at 26 degrees instead of 22 degrees, but if you compared the RT and Pro side-by-side it's difficult to tell the difference at first glance. These devices are clearly family members, and Microsoft has made sure they match in ways that allow you to use the same cover on either tablet.

A magnetic pen snaps next to a gorgeous HD display

Surface Pro has a gorgeous 10.6-inch ClearType Full HD Display that outputs a 1920 x 1080 resolution. I say it's gorgeous because this display is unprecedented on this type of device. Text reproduction and colors were spot on and viewing angles were great for tablet use. Aside from the resolution, Microsoft has packed in 10 points of multi-touch support and active pen input. The pen snaps magnetically to the side of the tablet and it has a small ridge that slots into the charging port. This magnetic charging port has been greatly improved from the Surface RT, it's a lot stronger and it's noticeable when you remove the pen or slot the charging cable into place. 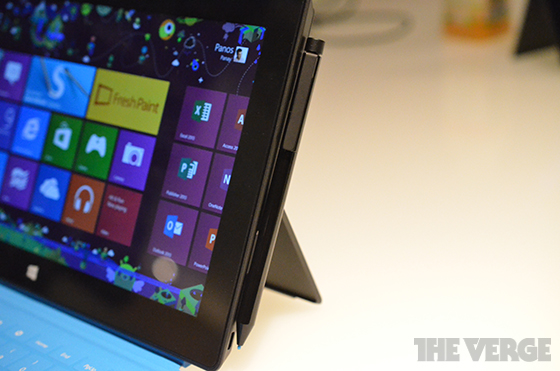 Removing the pen from its resting place allows you to take advantage of this unique display. As you bring it closer it starts to react with the Windows 8 UI on screen, allowing you to glide it above the glass while the cursor tracks away. This isn't a Wacom implementation, but its pressure sensitivity and apps like OneNote and Fresh Paint responded well to the pen use. The pen includes a button to trigger the right-click function in the OS and it also has an eraser at the top so you can flip the pen over and start deleting content within apps. The pen auto calibrates and I found the tracking was very precise. Palm rejection works as you'd expect so that you can rest your hands on the screen while you take notes or draw.

Behind the display the tablet is housed in a magnesium case that's near-identical to the Surface RT. The Surface Pro is 13.46mm thick compared to the 9.39mm of the Surface RT. Surface Pro also weights 0.5lbs more. I was expecting to be disappointed by the thickness and weight combo, but Microsoft has made this really comfortable to use. The Pro feels well weighted and the pen doesn't get in the way during two handed use. I tried holding it with one hand and it wasn't particularly comfortable, but the weight wasn't as big of a problem as I had previously considered. 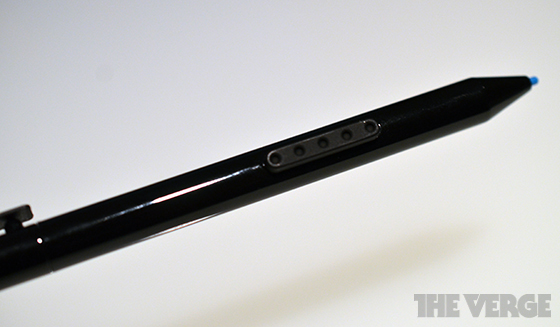 There's certainly a trade off with the Pro compared to the RT and that lies in a combination of hardware and software. The thickness allows Microsoft to pack in an Intel Core i5 processor which gives you access to a full version of Windows 8 Pro — that means you get all your normal desktop apps. The price is weight and battery life. It's not clear exactly how long the Surface Pro will last on average use, but I estimate it's around five hours. That's solid performance compared to the 8 hours you can expect from the Surface RT, but it's not very good for a tablet. And Microsoft has done a lot of work in Windows RT to optimize that OS for battery life.

Two fans push warm air through a vent around the device, but it's silent

Microsoft has built peripheral venting into the Surface Pro. A ventilation strip runs around the entire device and two fans move that hot air around to prevent the device from heating up. I spent time holding the device to my ear and feeling the back of it for signs of heat issues. There's a small whistle of air that you'll hear if you place it by your ear, but I couldn't get the system to produce any further noise even when I started playing games, audio, and had multiple applications running. We'll have to test this further when we receive a review unit, but it certainly seems like Microsoft has managed to make this pre-production model silent. On the heat side, I did find that there were two particular spots that were warmer than the rest of the device. I wouldn't say it was hot to touch or particularly noticeable, but my fingers discovered them at the top. 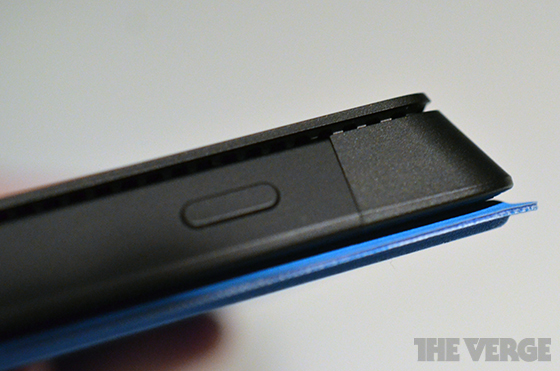 The rest of the Surface Pro is exactly what you'd expect if you've experienced the Surface RT. There's a 720p camera at the front and back, and a Mini DisplayPort on the side along with a repositioned microSDXC card slot. Microsoft has bumped the USB version to 3.0 for Surface Pro. The kickstand is almost identical, but I did find the snap on it wasn't as solid as the Surface RT model — this could be due to the pre-production nature of the unit. Microsoft has also made the Surface Pro charging cable slightly longer and implemented a USB port into the charging unit to charge your phone. I found it was a lot easier to snap on the charging cable, most likely down to the different angle and stronger magnet.

Performance was equally as impressive as the display and the Intel Core i5 processor is the perfect combination for Windows 8. One of the big complaints in our Surface RT review was the hit and miss nature of Windows RT performance on the Tegra 3 chipset. It's night and day with the Surface Pro. This thing flies. Opening up multiple apps is super fast and despite its tablet-like appearance, this is a full-power Windows PC. It's a great notebook computer that beats out the competition in a number of ways, but it's also still all about compromise. 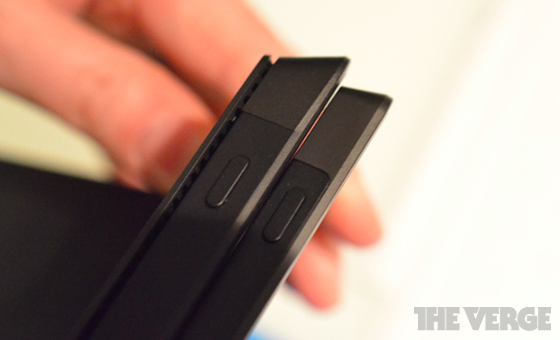 You still have to compromise here, but it's just the start of a bigger Surface family

Like the Surface RT before it, the Surface Pro isn't the perfect notebook or the perfect tablet. It's still difficult to use this device on your lap and the screen angle isn't adjustable. It's also a 16:9 tablet so using this device in portrait is comical. You could say these are obvious flaws in the product, but if you're willing to forgive both of them for a portable power house with beautifully engineered hardware then the Surface Pro isn't going to disappoint. The question of battery life remains, and it's an important one, but Microsoft has set up Windows 8 with some great hardware here. All that remains is more touch-friendly apps to take advantage of the focus on a new UI in Windows 8. It might seem like Microsoft is using Surface as an encouraging nudge to its OEMs to produce better hardware, but Ballmer has acknowledged Microsoft is a devices and services company now and the Surface family has only just begun.