The US government shut down at midnight, after House Republicans refused to budge on their effort to link the passage of the 2014 federal budget to a delay in the implementation of health care reform. When they wake up this morning, 800,000 workers — about 40 percent of the government's civilian work force — will be temporarily out of a job, while 1 million federal employees will be asked to work without pay.

They actually did it. A group of Republicans in the House just forced a government shutdown over Obamacare instead of passing a real budget.

Attempts at last-minute dealmaking in the House and the Senate failed to produce a compromise. House Republicans are seeking to link the continued funding of government with a delay in the requirement that individuals purchase health insurance under the Affordable Care Act, often called Obamacare. President Barack Obama has balked at Republican demands. "One faction in one branch of government doesn't get to shut down the entire government just to refight the results of an election," Obama said at a briefing today.

Senate Democrats chose to shut down the govt rather than discuss the failures of #ObamaCare http://t.co/et83H7BbO1 #FairnessForAll

As the reality of the shut down settles in, house Republicans and Democrats continue to blame one another for the failure to reach an agreement. Just before midnight, the Office of Management and Budget instructed federal agencies to begin shutting down. The programs that will be hardest hit by the closures include science, health, and the environment. The seasonal flu vaccine program will come to a halt while a compromise is reached, as will inspections by the Food and Drug Administration.

One area that won't be affected by the shut down is military. Despite continued bickering, Republicans and Democrats alike agreed upon legislation that will see "ongoing military operations" continue. In a recorded video message to the armed forces, President Obama reassured military personnel that "Congress has passed, and I am signing into law, legislation to make sure you get your paychecks on time. And we'll continue working to address any impact this shutdown has on you and your families." 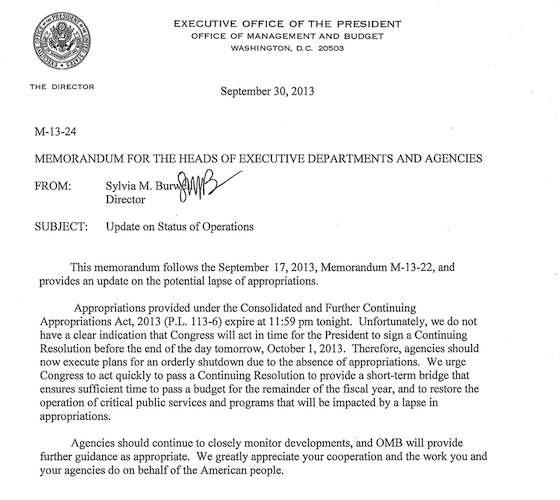 More from this stream America offline: tracking the US government's shutdown