US government shutdown kicks NASA and other agencies off the internet

Share All sharing options for: US government shutdown kicks NASA and other agencies off the internet

As the US federal government furloughs an overwhelming number of employees, the websites they manage are going dark as well. The FTC, USDA, NASA, Library of Congress, and other agency sites have been turned off completely, and others are being updated periodically or not at all. With all non-essential personnel off duty, there's almost certainly nobody home to man the sites, and redirecting to a splash page doesn't take much work. But the stark, mournful notices are effectively a protest as well, creating an online graveyard reminding us of what's no longer running.

We're sorry, but we will not be tweeting or responding to @ replies during the government shutdown. We'll be back as soon as possible!

Some sites have opted for a simple sentence or two explaining why they're not running. "Due to the lapse in federal government funding, this website is not available," says NASA. Others let you know exactly what you're missing: the FTC informs visitors that they can't file consumer complaints or register for the Do Not Call list. If you send a FOIA request, the FTC can't process it. The Library of Congress is closing everything except, perhaps ironically, its legislative information sites THOMAS and Congress.gov. 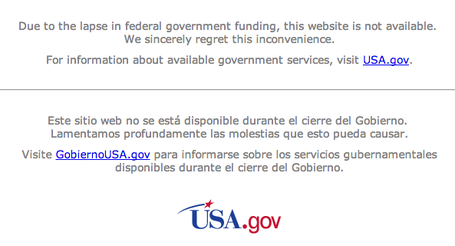 Other sites have stayed afloat, but they aren't fully operational. The Justice Department and Department of Defense sites are effectively in hibernation, with only periodic updates. Even the NSA isn't exempt from budget woes, and no updates will be posted during the furlough. If you're in an earthquake-prone area, the US Geological Survey has bad news for you: "While the USGS will continue to monitor and report on earthquake activity, the accuracy or timeliness of some earthquake information products, as well as the availability or functionality of some web pages, could be affected by our reduced level of operation."

On social media, things aren't much better. The USGS, NOAA, and others have officially signed off until Congress agrees on a budget, though they'll still push through vital warnings. Social media darling NASA will perhaps be missed the most, as it's cancelled all events and updates — though it does assure readers that the ISS is, at least, a higher priority than Twitter.

@KernowPods We will not be tweeting. Safe operations on the #ISS will continue. Thanks.

Due to government shutdown, we will not be posting or responding from this account. Farewell, humans. Sort it out yourselves.