New works from the legendary street artist Banksy are on their way to New York City. Beginning today, Banksy will be holding a monthlong show — which he's calling Better Out Than In — on the city's streets. His first painting is already up, and features two young boys reaching into a sign that reads, "graffiti is a crime." According to the Village Voice, the work is located in Chinatown. Those who can't make it into the city can see the painting up on Banksy's website though.

"Before you, you will see a spray art."

Banksy is also accompanying each painting with a museum-style audio guide. Naturally, there won't be a counter where visitors can check out audio players. Instead, each painting will have a phone number stenciled beside it, allowing anyone to call in and hear about the piece. The audio guide will be far from educational though — the first one is instead a humorous sendup of the type of language you might hear from a museum, supplementing the painting with useless details like, "You're looking at a type of picture called 'graffiti,' from the Latin 'graffito,' which means 'graffiti' with an 'O.'" You can listen to the first recording on his website or by calling 1-800-656-4271 and dialing 1# when prompted.

Banksy's last big series of paintings appears to have been placed in Los Angeles back in 2011, following the debut of his film Exit Through The Gift Shop in 2010. No other paintings have been spotted in New York just yet, and Banksy hasn't provided many details on what's to come. As for how long his new paintings will be able to stand up under the authorities' watch, Banksy already seems to know that their time could be limited. "Before you, you will see a spray art by the artist [Banksy]," his first audio guide announces, "Or maybe not — it’s probably been painted over by now."

Update: Banksy is going mobile in more ways than one. In addition to his cellphone audio guides, he's also set up an Instagram account that's posting photos of each of the works from his New York art show. A second piece was posted this morning, suggesting he may be aiming to deliver a new painting each day throughout the month.

Unfortunately for fans hoping to check out Banksy's first piece in Chinatown, it appears that someone has already painted over the work. Photos sent to The Verge show that it's now covered in white paint and the tag of another graffiti artist. A paint roller remains propped beneath it, suggesting that someone else is looking to turn Banksy's art into a work of their own. (You can click the image below to see the full work.) 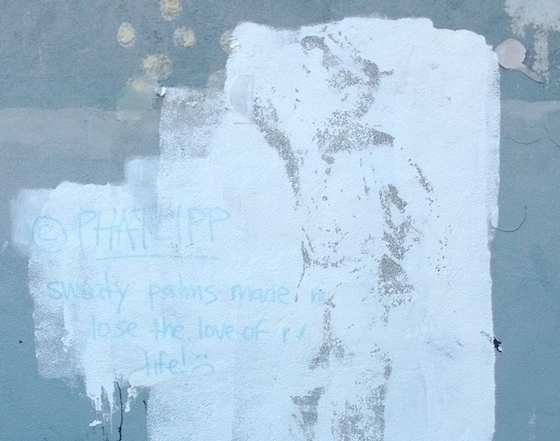 Thanks to Justin Denune for the photo!