Bose thinks you're using its Bluetooth-enabled Soundlink all wrong. It's designed to be used on the go, but many people are using the portable speaker around the house. That's why Bose has created a new wireless home audio system called SoundTouch, which is kicking off with three new speakers before expanding to a number of other Bose products. The new speakers come in three different sizes: the SoundTouch 30 is the biggest speaker, with a built-in woofer and meant for large rooms; the SoundTouch 20 slightly smaller, for a bedroom or kitchen; and the SoundTouch Portable is the smallest of the three and has a rechargeable lithium-ion battery.

The SoundTouch wireless audio system is what links all these speakers together, allowing them to connect to your home Wi-Fi network for universal control of music through your entire house. It's similar to Sonos, which creates a separate Wi-Fi network for the speakers, but instead connects to your existing network.

Supports both streaming and local music

Both systems pull music from both your home library as well as internet radio services, but Bose only supports streaming through Pandora at launch. The company plans to add other popular internet radio stations regularly, with Deezer and iHeartRadio specifically on the roadmap, but is still far behind the vast streaming music support of Sonos. Rather, Bose sets itself apart from the competition with the deep integration of car audio-like presets.

Each of the three SoundTouch speakers have buttons numbered one through six, which will instantly play whatever audio they've been assigned. Buttons can be set to a specific internet radio station, an album or artist from your home network, or even a single song. Once set, the presets are universal across all the speakers on the network, allowing anyone to immediately play their favorite music in any room with the single press of a button. 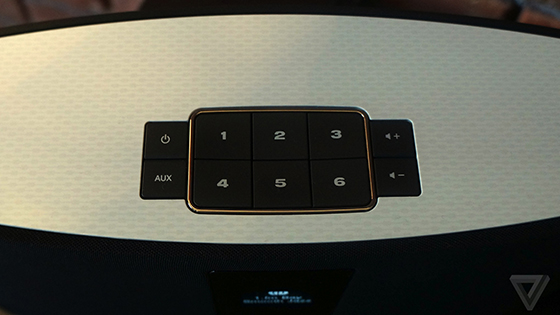 Users set the presets through the SoundTouch app, which is available for iOS, Android, OS X, and Windows. The app operates more like the Chromecast rather than Airplay, streaming music directly from the network as opposed to streaming from a specific device (although the speakers are also Airplay compatible).

The app's functionality is still fairly basic at this point. There's no support for speaker zoning yet, meaning you can't specify specific speakers to use without first turning them all on and lowering the volume for the speakers you want off. But we were told zoming should be coming early next year, which is around the same time that a number of other Bose speakers will be gaining SoundTouch support.

The Bose system is a bit pricier than Sonos, with an entry point starting at $399 for either the SoundTouch 20 or the SoundTouch Portable and the larger SoundTouch 30 costing $699. Sonos is expected to announce a small wireless speaker costing just $199, and the larger Sonos Play:3 and Play:5 cost $299 and $399, respectively. The three new Bose speakers are available now, with a SoundTouch enabled Wave music system joining the ecosystem in December and an amplifier, remote control, and support for VideoWave arriving sometime early next year.