As awareness of the super-addictive substance spreads, doctors are sounding the alarm

Share All sharing options for: Reports of flesh-rotting drug krokodil popping up in Oklahoma and NYC clubs

There have now been at least eight cases of the skin-rotting Russian drug krokodil reported in the US, according to medical professionals who spoke with The Verge, and at least three resulted in death.

Krokodil is the street name for the nasty, cheap concoction that is derived from cooking codeine with chemicals such as lighter fluid or gasoline, then injected into the skin. It’s up to 10 times as potent as morphine and lasts half as long, which makes it extremely addictive.

It was thought to be confined to Eastern Europe and Russia, where it has had devastating effects. However, it has shown up in the last year in two patients in Arizona, three deaths in Oklahoma, and three patients in Illinois, one of whom is in critical condition.

Two krokodil users in Oklahoma were treated in the burn unit

It’s also made its way across the pond to the UK, where a homeless krokodil addict recently died after prolonged use. One source even told The Verge that it is being sold in at least two nightclubs in New York City’s trendy Meatpacking District.

The drug is called krokodil because impurities cause the skin to yellow, harden, rot, and fall off. Two krokodil users in Oklahoma last year had such devastating skin damage that they were treated in the hospital burn unit until they died, says Dr. William Banner, director of the Oklahoma Poison Control Center.

"We were reluctant to publish it," Dr. Banner tells The Verge. "But now that it’s out there, we really want the message to be, ‘This is an end game move. This is going to kill you.’"

Another Oklahoma resident, Justin McGee, 33, died in the hospital in November. He technically died of a heart attack, but he showed symptoms of krokodil use, including missing skin. "It did his body so bad, he would lie in the bed with his head covered, because he didn’t want them to see," his sister-in-law Lesia McGee tells The Verge.

Justin’s symptoms were stumping doctors, who eventually had him airlifted from the small town of Duncan to Oklahoma City. "They were calling us because I'm a nurse," Lesia recalls. "They said, ‘Chunks of his skin are falling off and they can’t get an IV in.’" 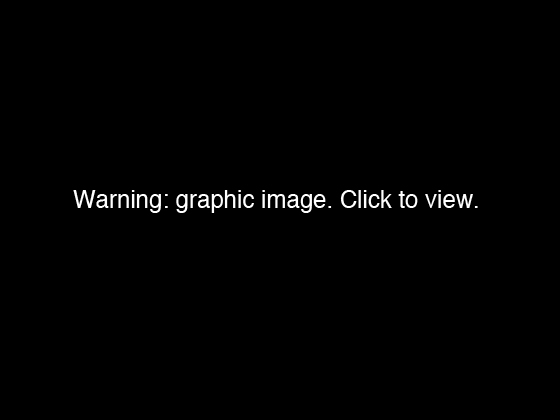 The effects of skin necrosis, after removal of the dead tissue in a krokodil user's arm. Source: Dr. Allan Harris

An autopsy report showed Justin tested negative for desomorphine, the active ingredient in krokodil. But desomorphine leaves the body quickly and doctors often aren’t able to confirm it in time with blood or urine tests. Justin also tested positive for morphine, methamphetamine, and amphetamine. At his funeral, friends told Lesia that they had been using the drug after finding the recipe for krokodil on the internet.

The spread of the drug does not necessarily indicate a coming krokodil epidemic. News headlines report that the drug has "shown up in the US" or "made it to the UK," but it’s not like dealers are shipping en masse. (It is not available on any of the virtual black markets, for example.) The recipe for krokodil is available online, and it’s not surprising that desperate addicts are discovering it in tiny clusters in isolated cities.

The spread is also what Dr. Banner calls "self-limiting" -- addicts are more likely to die than spread the drug around.

"This is a poor man's drug," says Dr. Banner. "It is kind of the end of the road. They run out of money, they’re horribly addicted. They cook it, inject it, get high, wake up and want more."

The Drug Enforcement Administration has not seen any confirmed cases or any indication that the drug is taking off. "As far as the DEA is concerned, we are not seeing it, widespread or any cases," spokesperson Dawn Dearden tells The Verge. "It’s something that we’ll keep an eye on if there’s some sort of trend."

Perhaps most concerning is the notion that the moonshine-style drug may be finding new users in New York City’s nightlife scene. Sal Ramirez, who witnessed krokodil being used while serving in the Peace Corps in Kazakhstan, says he saw a man being thrown out of Le Bain, one of New York’s hottest clubs, after attempting to peddle krokodil. Ramirez was also directly approached by a dealer at another club, Westway, who tried to sell him krokodil and "clean syringes" in the bathroom.

"I think it definitely is the novelty" that might persuade clubgoers to try krokodil, Ramirez tells The Verge. "But what people aren’t really that aware of is the fact that it’s super addictive. If more people knew that the reason it’s called krokodil is because of the effect it has on you, I think they wouldn’t be using it."