Google will start using your picture to sell products to friends

Google will start using your picture to sell products to friends

Google users will soon find themselves unwittingly advertising products for the company, thanks to a massive change Google is making to its terms of service. First reported by the New York Times, the change categorizes a user's follows, comments, and +1s as "shared endorsements" for a product or service. These shared endorsements can be used to build ads across the platform, pulling in a user's profile name and photograph to help boost the ad's credibility. 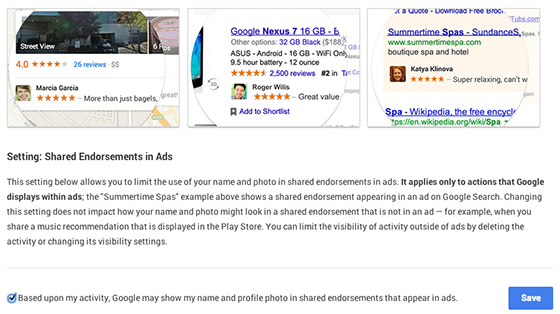 Google hasn't specified what these new ads will look like, but the expanded terms of service would allow much more social information to be included in the shared endorsement. The changes will be advertised on Google's homepage and in search results, so the company hopes that users will be aware of the changes before they go into place on November 11th. Google will build ads using information from adult users, so anyone under the age of 18 will be automatically opted out.

Google+ has never enjoyed the organic success of its competitors, and the enormous, potentially severe privacy implications of the change certainly aren't going to help. The new advertising model is similar to Facebook, which shows which of your friends have liked an business or service on its social networking site. As with Facebook, Google provides the ability to opt out of the new shared endorsement program. Users who have previously opted out of sharing their +1s with friends will also be opted out of the expanded shared endorsements, but for everyone else the new feature will be automatically enabled on November 11th.

Update: This post was edited to include new information and statements from Google.