The iPad mini with Retina display and the new iPad: here's what to expect

The iPad mini with Retina display and the new iPad: here's what to expect

Tim Cook may have promised last year that Apple was going to "double down" on secrecy, but recent iPhones and iPads have all been heavily leaked prior to their official announcements over the past couple of years. And the leaks have only continued for the widely-expected fifth-generation iPad and the second-generation iPad mini. With Apple's annual October event reportedly scheduled for the 22nd, we're looking back through all of the rumors to piece together what we can expect Apple to announce on the iPad front later this month.

The iPad mini made quite a splash when it was announced in 2012. It brought the company's stupendously successful tablets down to a smaller, easier-to-hold form factor — as well as a more affordable price (by Apple's standards, at least). Despite its success, rumors of an iPad mini with a high-resolution Retina display began even before the original tablet launched, and after Apple's announcement that it'd ship with a 1024 x 768 resolution screen, expectations only intensified. 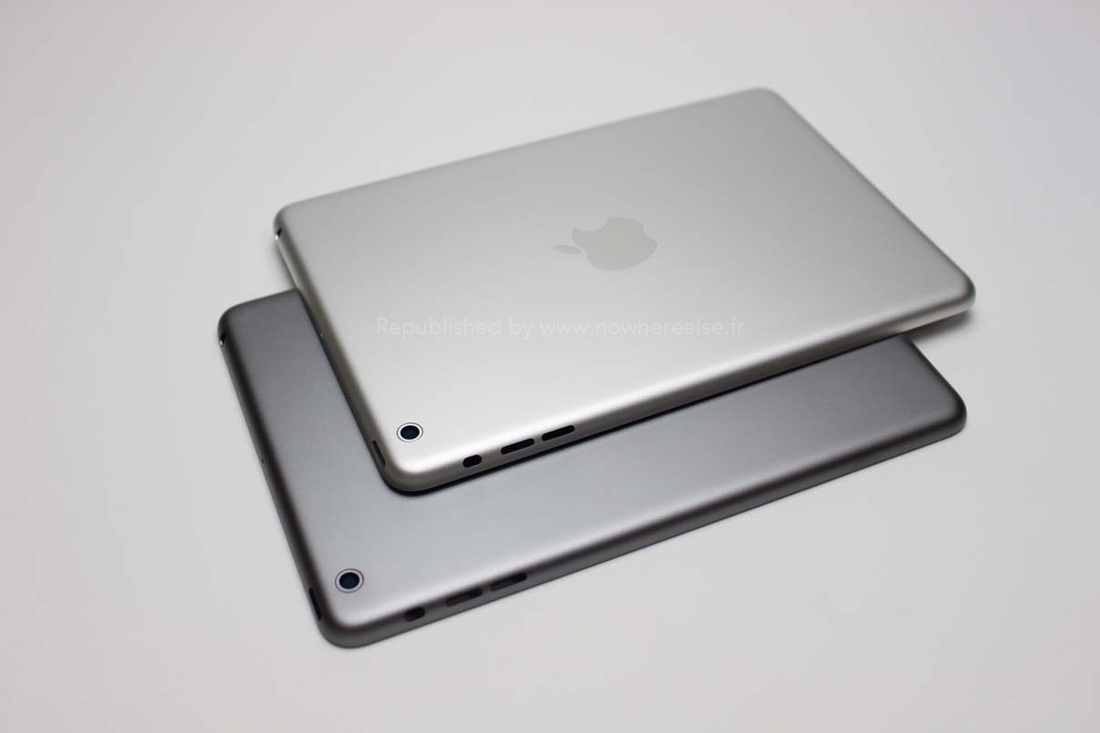 A Retina display-equipped iPad mini now seems inevitable. In August, both The Wall Street Journal and Bloomberg reported that Apple was working on such a device, and they said that it was likely that it'd use the same 7.9-inch screen size as the current tablet. If Apple decides to stick with its developer-friendly model of quadrupling the screen resolution when jumping up to Retina, the device will likely have a 2048 x 1536 resolution.

However, there has been some debate over when Apple could ship a Retina iPad mini. Reports haven't pinned down a specific date; the consensus seems to be that the device will be announced at the October 22nd event and ship in time for the all-important holiday season, but there have been hints of supply issues. Reuters reported earlier this month that supply will be very limited this year, while supply chain analysts IHS iSuppli concluded that Apple wouldn't be able to launch until the first quarter of next year. If a 2014 launch is accurate, it's unlikely that Apple will announce the tablet this month, as the company typically puts its products on sale soon after they're revealed. However, even if Apple can get supply in order for this year, the government shutdown could throw a wrench in the company's plans: much of the Federal Communications Commission's staff has been furloughed and can't approve new devices.

Supplies may be limited at launch

A steady stream of part leaks suggest that Apple will not make any significant external design changes from the original iPad mini. The design is most clearly revealed in photos from prolific leaker Sonny Dickson. The pictures suggest that Apple will offer the new iPad mini in space gray and silver, just like the iPhone 5S. (A gold iPad mini seems unlikely; supply has been limited for the iPhone 5S and the one photo of a leaked case in that color does not appear to be legitimate.) 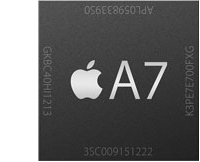 It's expected that there will be some more significant changes inside the new iPad mini, however. Multiple reports point to Apple using the same 64-bit A7 system-on-a-chip powering the iPhone 5S in the new tablet, though CE: The Magazine and often-reliable KGI Securities analyst Ming-Chi Kuo predicted that the mini and the new iPad would use a more powerful A7X chip. If the new mini has a Retina display it would benefit from an upgrade to an A7 or A7X — it takes some power to push all of those pixels — but there's also a battery life concern. As we saw when Apple introduced the Retina display in the iPad 3, the high-resolution screen and more powerful processor inside forced the company to increase the size and weight of the tablet in order to accommodate a larger battery. Additionally, a Retina display and a brand-new SoC would put even more pressure on Apple's already slimmer-than-normal profit margins on the mini.

Rounding out the specifications so far is a rumored upgrade to an 8-megapixel sensor from the current 5-megapixel camera on the iPad mini. The rumor comes from analyst Ming-Chi Kuo, who adds that the camera itself will likely open to a larger aperture than the current f/2.4 lens, helping out in low light situations. Lastly, there have been some rumblings that the new tablet will include a Touch ID fingerprint sensor like that found on the iPhone 5S, but evidence for that has been sketchy at best.

Just 24 hours ahead of Apple's event, yet more leaked photos suggest that Apple could bring its Touch ID fingerprint recognition technology to the next iPad mini. The shots also reveal that, like the iPhone 5S, Apple may be planning to offer the new model in a gold color. 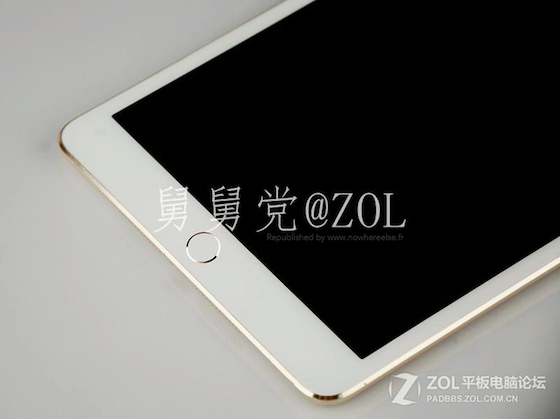 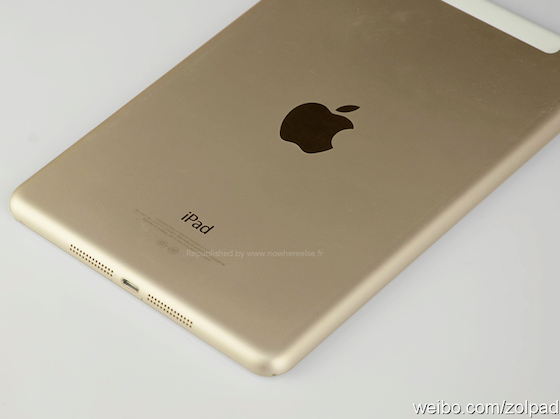 The iPad mini might get all of the attention, but all signs suggest that fans of Apple's original tablet also have something to look forward to on October 22nd. All rumors suggest that the 9.7-inch tablet will see its first major hardware redesign since March 2012, when the iPad 3 was released. The Wall Street Journal and Bloomberg both reported in August that the next iPad would feature a thinner and lighter design, borrowing from the iPad mini before it. The WSJ's sources said that Apple plans to use the same film-based (rather than glass) touch-sensitive layer first used in the mini, helping the company achieve a narrower, thinner, and lighter tablet. 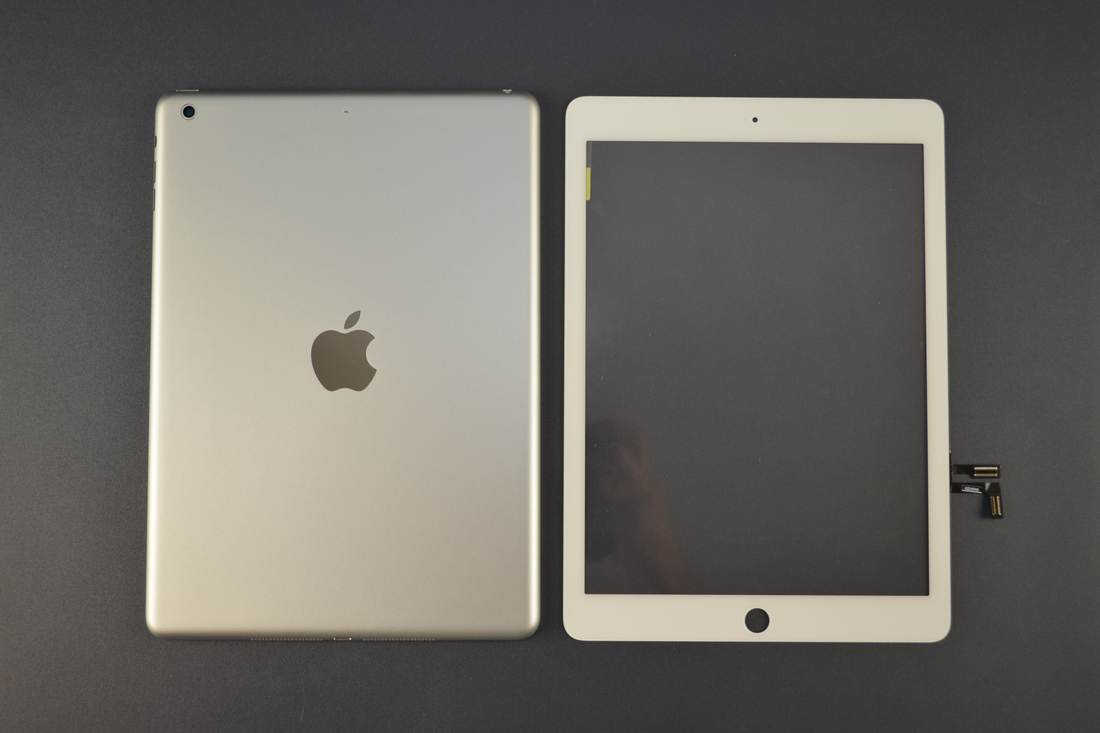 The reports line up well with iPad cases leaked by 9to5Mac back in January, and a spate of photos in the past few months all show what appears to be a large iPad mini. The new tablet is said to be roughly 15mm (or two-thirds of an inch) narrower than the current iPad, and leaked dimensions provided by a case maker suggest the tablet will be 2mm — or close to 20 percent — thinner than the outgoing model. Gone, too, are the tapered edges found on the iPad 3, as the entire tablet takes on the more boxy design of the iPad mini. In terms of color choices, leaked cases show that Apple is working on both a space gray and silver iPad, borrowing from the iPhone 5S' color options.

Despite the smaller frame, rumors universally suggest that Apple will stick with the 9.7-inch, 2048 x 1536 Retina display first introduced in the iPad 3. Any change would require a lot of legwork for developers, so there's no reason to believe Apple will swap the display resolution or size — even though competition like the Nexus 10 now features a display with a higher-resolution screen.

Apple introduced its first 64-bit chip, dubbed the A7, alongside the iPhone 5S last month, and rumors suggest that either it or a more powerful A7X SoC will be utilized in the new iPad. Like the rumored iPad mini update, analyst Ming-Chi Kuo says an improved camera featuring an 8-megapixel sensor and a lens that opens to a larger aperture is in store. There's little reason to believe Apple will change its pricing for the new iPad — expect it to start at $499 when it comes out.

A new iPad mini and full-size iPad seem all but certain for October 22nd, but rumors over the past year have also suggested that Apple is considering a couple of other tablet designs. One rumored device is a more iterative update to the iPad mini that doesn't feature a Retina display. Kuo has speculated that a $199 to $249 model designed to compete with less expensive Android offerings like the Nexus 7 and Kindle Fire HDX could arrive early next year. He suggests that Apple may cut the rear camera or perhaps offer just 8GB of storage to reach that price point.

Code spotted in the iOS 7 SDK suggests that this cheaper iPad mini could use the same A6 chip found in the iPhone 5, which would be a natural upgrade from the A5 processor in the current model. The Wall Street Journal's Lorraine Luk also said in August that Apple was looking into more varied color choices for the mini, but overall we'd say that these rumors seem far less certain than those concerning the Retina iPad mini and the fifth-generation iPad — especially since we've heard little about a cheaper iPad mini since this summer.

More iPads may be arriving in early 2014

Lastly, there's also word that Apple is investigating new screen sizes. In July, The Wall Street Journal's supply chain sources said that the company was considering a massive iPad with a screen just under 13 inches in size, lining up with an earlier report by Korean site ET News that pointed towards a 12.9-inch iPad. Since then a number of other reports out of Asia have made similar claims, but there's little reason to believe that such a device will be announced this month. Indeed, it's possible it will never be released, as Apple tests a number of products before ultimately settling on what to produce.

Ultimately, it's a very safe bet that Apple's going to have some new iPads to show us later this month. However, even with numerous leaks, there's no telling for certain what those devices will be until executives reveal the tablets on stage. We'll be there to cover it live when they do.

iOS 7 review: a new look or a new beginning