Google Nexus 5 and Android 4.4 KitKat rumors: here's everything you need to know

Google Nexus 5 and Android 4.4 KitKat rumors: here's everything you need to know

With Google's stock of the Nexus 4 now officially depleted, the company's next flagship Android phone should be arriving within a matter of weeks â perhaps just days. We've already seen the so-called Nexus 5 in various FCC filings, leaked photos, and on Google's own Mountain View campus. And while we've got a fairly good sense of what to expect in terms of hardware, there's still plenty we don't know about the next major revision of Android, version 4.4 KitKat. So with the clock ticking down on a brand new Nexus device, we've gathered the most reasonable rumors together so you can set your expectations for when the fateful day finally comes. 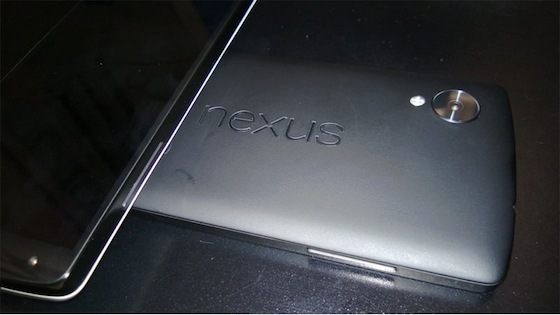 Every indication we've seen suggests that Google has chosen to stick by LG, the same manufacturer it chose for last year's Nexus 4. And the continued alliance makes sense: other than a glaring lack of LTE support and questionable battery life, last year's Nexus smartphone earned strong reviews from consumers and the media. This marks the second time Google has kept the same partner for successive Nexus phones. (Samsung handled manufacturing of the Nexus S and Galaxy Nexus.) Based on what we can tell, the extended relationship has allowed Google and LG to tackle many of the problems people had with last year's handset.

Update: A seven-minute hands-on video (above) of what appears to be the Nexus 5 wasÂ spotted by Android Central, and while it's not covering a lot of new ground, it gives us our best idea yet of what to expect when the device is released.

Like Samsung, HTC, and other Android OEMs, Google seems to be conceding that in the eyes of many consumers, bigger means better. Based on photos and FCC documentation, we expect the Nexus 5 to include a 5-inch, 1080p display, one that's likely to bear a close resemblance to the fantastic 5.2-inch panel LG is using for its flagship G2. Thanks to its sharp resolution and accurate color reproduction, theÂ G2's display now ranks as our favorite among smartphones. If Google manages to bring a screen of equal quality over to the Nexus 5, that'd be a major win for its most passionate Android fans.

There's no getting around it: the Nexus 4's lack of LTE was a major omission that hurt the handset when it was placed up against the competition. In all areas but those with the strongest HSPA+ reception, the Nexus 4 was routinely trounced by other Android devices (and the iPhone 5) when it came to wireless data speeds. Thankfully it seems Google and LG have finally righted that wrong.Â FCC filings for what we believe to be the Nexus 5 reveal support for a host of LTE bands. Customers on AT&T, T-Mobile, and even Sprint can expect 4G connectivity. Unfortunately, the same can't be said for those of you on Verizon â a carrier which hasÂ something of a tenuous relationship with Google. 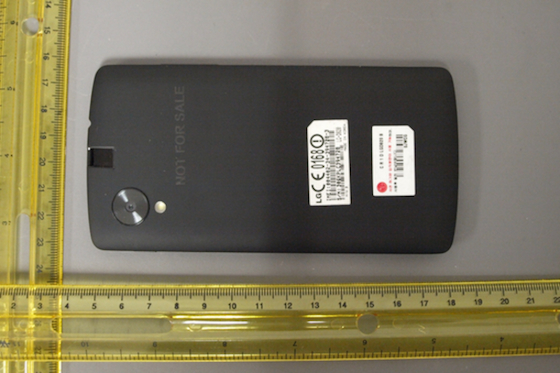 From here, things get a bit less certain. In terms of appearance, the Nexus 5 looks to feature a nondescript design with a black, soft touch rear finish and the same landscape-oriented Nexus logo we've seen on the Nexus 7. The Nexus 5 also seems to share the Nexus 7's oversized camera hole, a design element that hasn't led to any noticeable benefits for the tablet. And although LG's G2 seems to be the basis for the Nexus 5, it appears as though the two devices contain different cameras. A purported service manual for the Nexus 5 reveals that it includes an 8-megapixel rear camera, down from the 13-megapixel shooter in the G2. Other rumored specs include a Snapdragon 800 CPU, 2GB of RAM, and a 2,300mAh battery. Like its predecessor, the Nexus 5 is also rumored to support wireless charging and NFC. We don't expect to see expandable storage on board, but evidence shows both 16GB and 32GB variants of the phone will be available. That's twice the amount of storage Google offered last year.

For months, the working theory was that Google's next major Android update would be known as Key Lime Pie. But the company stunned everyone last month when it revealed that Android 4.4Â would in fact be branded KitKat. The unexpected allegiance was prompted after Google realized "very few people actually know the taste of a key lime pie."Â After months of negotiations, Google managed to secure rights to use the popular candy name. The partnership has also produced a run of 50 million Kit Kat bars with prominent Android branding and Nexus tablet giveaways. 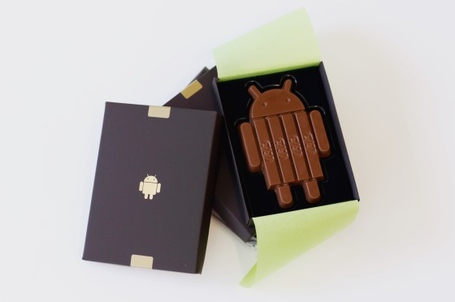 Beyond the name, Google has managed to keep a tight lid on what it has planned for Android 4.4. The company has said only that its goal with KitKat is to "make an amazing Android experience available for everybody." That hints Google's next mobile OS update may be designed for maximum compatibility across a slew of devices including game consoles, smartwatches, laptops, andÂ a refocused presence on TVs.

Something of a break may have finally come today, however, as Italian Android blogÂ TuttoAndroid has posted images of an apparent Nexus 5 running Android 4.4. Changes include a new application launcher; Google seems to have ditched the all-black background in favor of a transparent look at the home screen. A shortcut icon for the camera has also been placed on the lock screen. The website also claims Google has brought over some "always listening" functionality from the Moto X to give users quicker access to Google Now and search. 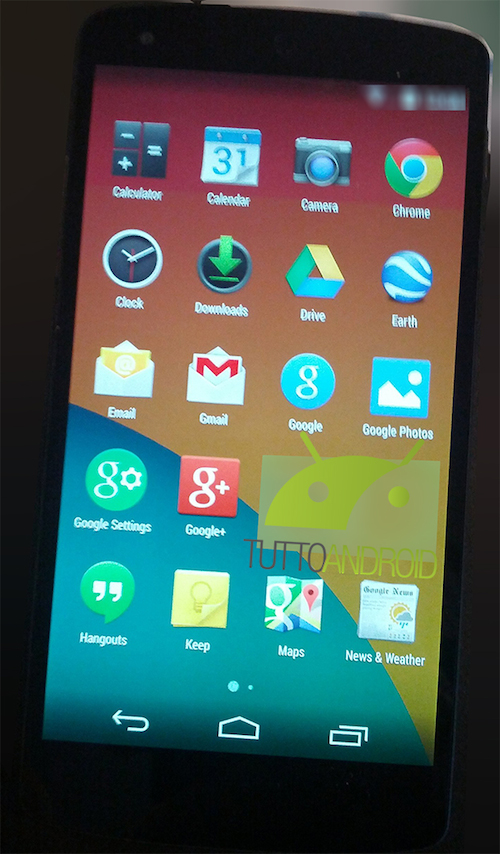 AnotherÂ recent leak at 9to5Google point to a redesigned dialer and a status bar that shifts colors according to what's on screen. The pictured devices could easily be running beta or non-final versions of Android 4.4, but combining these images with other leaks and evidence should tell you that Google's next flagship phone is likely coming soon. Very soon. As always, when Mountain View finally decides to make things official, you'll find in-depth coverage here at The Verge.