When visitors registered their badges for New York Comic Con, they were asked if they wanted to connect a Twitter or Facebook account. But if they did, they got more than they bargained for. The convention organizers began quietly sending automatic tweets from attendees' accounts, posting conversational-sounding promotional messages with the #NYCC hashtag. The messages, collected here by Mashable, directed readers to NYCC's Facebook page, and the affected users quickly started complaining that they'd never sent the tweets.

RT So much pop culture to digest! Can’t. handle. the. awesome. #NYCC http://t.co/XShKBd3LVP This wasn't me. It was NYCC tweeting for me :/

A few hours later, NYCC apologized and shut off the feature, telling attendees to "not fret if #NYCC-ID tweeted as you." While they called the feature opt-in, the page we used to register our badges didn't make it clear that any automated tweets would be sent. It's often understood that if you authorize an application to access Twitter, it can post as you, but that's almost always done only with users' consent — and in a way that makes it clear whether a tweet is promotional or personally written by the sender. This is the first year that NYCC has used this badge registration system, which is meant to let the organizers track badges and substitute an RFID scan for the traditional visual check. 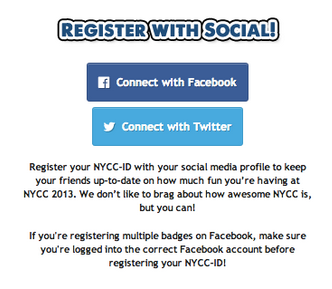 FYI - do not fret if #NYCC-ID tweeted as you yesterday! We shut this opt-in feature off so it won't happen anymore. Have a blast at NYCC!