Nokia appears to be pushing ahead with its Lumia 2520 Windows RT tablet despite Microsoft's plan to acquire its devices business. A newly leaked photo from the Evleaks Twitter account shows Nokia's tablet in a cyan color. At first glance it looks like a large-screen Lumia Windows Phone, but the Windows button in the center and volume buttons on the side show it's clearly a tablet. The similarities explain Nokia's reason to continue the Lumia brand even for its tablets.

Nokia is expected to announce the device at an event on October 22nd, alongside a 6-inch Windows Phone and four other devices. The Lumia 2520 Windows RT tablet is expected to include a 1080p display and be powered by quad-core Qualcomm processor. It is also expected to have a 6.7-megapixel camera, and will be priced at $499. WPCentral reports that the tablet will launch on November 17th at Verizon, with black and red colors. Evleaks claims Nokia will ship the Lumia 2520 in black, white, red, and cyan.

Update: The red Lumia 2520 has now also been revealed. 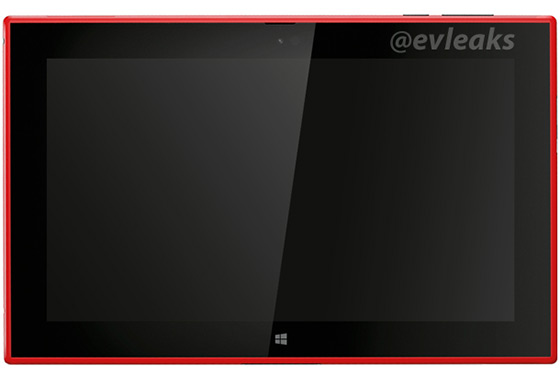