Monkey see, monkey feel: why we should care about ape emotion

Share All sharing options for: Monkey see, monkey feel: why we should care about ape emotion

Bonobos have long been recognized as one of man's closest, and perhaps most fascinating, primate relatives. Much like their chimpanzee cousins, these endangered great apes are remarkably humanlike in their behavior. They express emotion, communicate through language, and have a voracious appetite for sex. But the similarities don't end there.

A new study from Emory University has uncovered more parallels in the way bonobos and humans develop emotionally, suggesting that the evolutionary ties binding us together may run deeper than previously believed. Published today in the Proceedings of the National Academy of Sciences, the study finds that young bonobos learn to regulate their emotions in the same way human children do, which implies that both species develop under similar social frameworks.

A tale of orphans and empathy

Co-authors Zanna Clay and Frans de Waal discovered these parallels after observing how different bonobos reacted to stressful situations at a sanctuary in the Democratic Republic of the Congo (DR Congo), the primate's natural habitat. The study focused on two groups of young bonobos: those raised by their mothers, and those raised by human substitutes. Researchers observed each ape’s reaction to fights among its primate peers at the sanctuary — whether they were directly involved or mere bystanders — and examined how they behaved toward others following the altercations.

Overall, bonobos raised by their mothers were able to overcome distress within seconds, whereas their orphan counterparts would scream for minutes after a fight had ended. The mother-raised apes also showed more empathy toward their peers immediately after each fight, consoling embattled bonobos with hugs, grooming, and attention while the orphans continued to scream by themselves.

According to the researchers, this underscores an important human parallel. Studies have shown that human children who have a stable relationship with their parents learn to control their emotions as they develop, whereas orphans typically struggle to temper their ups and downs. In humans, such emotional regulation is seen as critical to healthy social development, as children who do a better job of controlling their own emotions are more likely to feel empathy for others.

"It is almost as if one first needs to have one's own emotional house in order before one is ready to visit the emotional house of another," de Waal wrote in an email to The Verge. "This is true for children, and apparently also for bonobos." 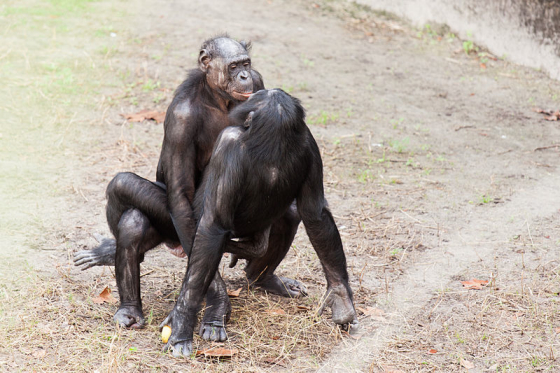 De Waal, a primatologist at Emory’s Yerkes National Primate Research Center, has written extensively about bonobos, focusing on their psychological and social development. Together with chimpanzees, the bonobo is the closest known relative of humans, though they remain somewhat elusive. The animals live exclusively in the war-torn DR Congo, making it difficult for researchers to observe them in the wild, and poachers have routinely slaughtered them for bushmeat. Exact figures are unknown, but experts believe bonobo populations have been in decline for the past 30 years.

De Waal and Clay were inspired to investigate the bonobo's emotion mechanisms after noticing curious differences in the ways the primates reacted to fights at the sanctuary.

"In the aftermath of a fight, some bystander bonobos simply fled the scene, some froze up on the spot and some actually ran towards the incident to offer comforting contact to the victim," Clay says. Although others had examined ape emotional control in staged experiments, she and de Waal went further by observing bonobo behavior in natural settings.

The scientists hope their work will encourage further studies on emotion regulation in primates, which was once seen as a taboo subject among researchers.

"'Animal emotion' used to be a dirty word."

"‘Animal emotion' used to be a dirty word," de Waal tells The Verge, saying that researchers acknowledged the existence of animal emotions, but disregarded them as irrelevant. That stance has since evolved, though the primatologist says there’s still much to learn from the ways animals process and express emotions.

"We are still not used to thinking in terms of emotions and the control they require," de Waal says. "We accept them, but rarely address them. Even today, most textbooks on animal behavior fail to mention emotions."

Their work may also have implications for our understanding of emotion regulation in humans, as scientists continue to unravel the social and psychological evolution from ape to man. Because both bonobos and humans develop under the same socio-emotional framework, further studies on our primate relatives may reveal new insights into our own behavior and disorders.