Sonos announces the Play:1, its most affordable wireless speaker yet

Sonos announces the Play:1, its most affordable wireless speaker yet

Sonos has been selling its wireless speaker system for the home for years, but generally, its products have been out of the reach of many consumers just looking for an easy way to listen to the music on their phones or streaming services without having to reach for headphones. The $399 Play:5 and $299 Play:3 are stellar speakers that offer great fidelity, easy setup, and integration with Sonos' proprietary wireless mesh network so you can put them anywhere you have an outlet in your home. But they are both rather large, expensive, and more than just the average person needs for a small room or apartment. Today, the company is hoping to fill that need with the new Play:1, a compact $199 wireless speaker that integrates with Sonos' existing system and services.

The Play:1's price point puts it squarely against the growing crop of portable, Bluetooth-equipped speakers, such as Jawbone's Jambox. But Sonos isn't looking to play in that field: the Play:1, requires a wall outlet to function, doesn't really fit all that well in your average shoulder bag, and only works when paired to Sonos' wireless Bridge or plugged directly into a router over Ethernet. Though it is by far the smallest speaker in Sonos' lineup, the Play:1 weighs just over 4 pounds, stands almost 6.5 inches tall, and is about 4.75 inches wide and deep. Needless to say, while you can easily move the Play:1 around your home or office, it's not something you want to lug around wherever you go.

The Play:1 looks and feels much nicer than most speakers in this price range

Sonos has always had an attention to detail when it comes to the design of its speakers, and the Play:1 is no exception. Arguably the-best looking speaker in the range, short of the very handsome Playbar, the Play:1's rounded corner design helps it blend away into your decor, making the sound the speaker outputs its most important quality, not the appearance of the speaker. That said, the single-piece stainless steel grill and sparse physical controls are enjoyable to look at, and you can appreciate the craftsmanship when you pick up the Play:1; it just feels so much nicer than other speakers in this price range. The speaker itself only has a volume rocker and play / pause button, leaving the rest of the controls to Sonos' apps. (The play / pause button replaces the Mute button found on older models, which will be updated with the new functions provided via software updates). Sonos is offering the Play:1 in black or white options, and we found each of them attractive.

Though the Play:5 has five speaker drivers and the Play:3 has three drivers, the Play:1 actually has two, despite its name. A 3.5-inch extended-throw mid-woofer is joined by a extended-throw tweeter to cover a wide range of sound — pretty much everything short of the lowest of bass. The design of the speaker with its wraparound grill might lead you to believe that it can throw sound in multiple directions, but it is indeed just front-firing. Sonos says that it spent a lot of time engineering the Play:1 to provide optimal sound no matter where it's placed, which can be any number of locations in a home given its small size. In our tests, those efforts seemed to pay off — the Play:1 is versatile enough to provide great sound on a bookshelf, a nightstand, on your kitchen counter, or even when placed on the floor.

Seamless integration with the Sonos system is expected... and delivered upon

Since the Play:1 integrates seamlessly into Sonos' existing wireless system, it can be paired with other Sonos speakers you already own quite easily. Two Play:1 speakers can be paired together in a stereo coupling, offering true stereo sound with noticeable separation, provided you put them far enough apart. We paired two of the Play:1s with the Playbar and Sonos Sub to quickly create a 5.1 surround system in our living room, ideal for movies and other entertainment. This actually fills a gap we noted in our review of the Playbar, and it really seems like the perfect Sonos home entertainment system consists of four separate components (and a hefty $1,800 price tag to match).

We tested the Play:1 with a variety of music, everything from ambient electronic music, to riff-tastic '80's hair metal, to modern pop, to classical staples. The Play:1 has the signature Sonos sound: it's clean, loud, detailed, and crisp, but lacks the warmth you might get from a traditional analog system. It does a very good job at getting near the max of its volume output before breaking up, but we noticed that the sound doesn't really open up until you get to 30 or 40 percent of the Play:1's output (which is already pretty loud for a small room). At lower levels, it tends to be a bit boomy and not quite as crisp, which might not be the best option if you just want a small speaker for quiet listening in your bedroom.

The Play:1 is considerably louder and more present than even the Big Jambox

Compared to the similarly priced Jambox, the Play:1 is considerably louder, crisper, and more present. The more expensive Big Jambox offers a wider range and better separation than a single Play:1 thanks to its larger speakers and configuration. But the Play:1 is still louder and sounds bigger, if slightly more muddled because of the lack of speaker separation. Of course, when you pair two Play:1s in stereo, neither Jambox stands a chance.

In fact, when paired in stereo, two Play:1s give Sonos' own Play:5 a good run for its money, thanks to their greater versatility with positioning. The Play:3 on its own does sound better than a single Play:1 — and earns its higher price tag — but for many, the lower cost Play:1 will likely suit much of their needs.

The biggest sticking point with the Play:1 is the same issue that every Sonos product has: it relies on the company's proprietary wireless protocol and associated mobile and desktop apps to function. Sonos is smartly including a wireless Bridge (normally $49, required for connecting Sonos speakers wirelessly) with every Play:1 purchased through the holidays, meaning that you do actually have a wireless setup right out of the box instead of having to plug the speaker directly into your router. 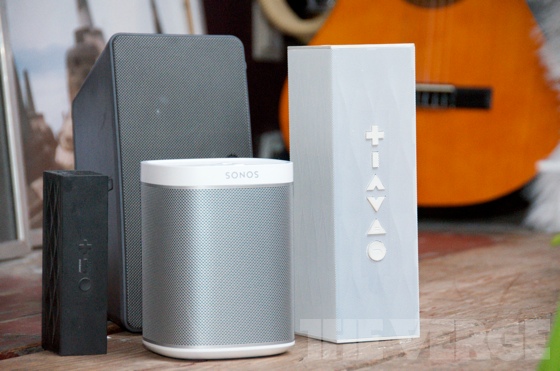 Sonos' apps for the PC, Mac, Android, and iOS support a large number of streaming music services — Pandora, Spotify, Rdio, Mog, TuneIn Radio, and Songza, to name a few — in addition to playback of locally stored files. But they don't yet support Google Music, SoundCloud, or iTunes Radio. Unfortunately, the only way you can play music on Sonos is through the app itself, which is generally a subpar experience to the native apps for Spotify, Rdio, and others. The Sonos apps don't integrate with iOS 7's Control Center or Android's lockscreen for easy play / pause, volume control, and track changes, for instance. And if you were hoping to just watch a movie or TV show on your phone or tablet and have the audio pipe through the Play:1, it's just not possible. Though Sonos' setup of multiple speakers is powerful and fairly straightforward, it's still easier to AirPlay audio from almost any app or use Bluetooth to a compatible speaker than it is to use the Sonos system.

You have to go on a lot of picnics to justify a Jambox over a Play:1

The Play:1 is a fantastic speaker for its price point and even beyond, and it will likely be very popular during the holiday season. It offers the easiest way to get into the Sonos platform, provided the system's current limitations are acceptable for you, and has really great sound to match. You would have to go on a lot of picnic trips to justify the higher cost or inferior quality of a typical portable Bluetooth speaker that we usually see in this price range over the Play:1.

A single (or even a stereo pair) Play:1 is great for a small apartment, office, or bedroom. But the Play:1 really shines when it is integrated with Sonos' other components, and the company hopes that its lower price point and easier accessibility will get that many more people hooked on the system. Two Play:1s paired with a Sonos Sub is a enviable setup, but admittedly tips the register at nearly $1,100. However, given how impressed we were with the Play:1 in the short time that we've had with it, we don't think Sonos will have too much trouble winning over converts. The Play:1 can be purchased directly from Sonos.com or from Target, Best Buy, or other retailers starting today.

Thomas Ricker and Bryan Bishop contributed to this report.