In a bid to stay independent, Foursquare rolls out self-service ads for small businesses

In a bid to stay independent, Foursquare rolls out self-service ads for small businesses

The Sky Room bills itself as New York's highest luxury rooftop bar, offering a spectacular view of the city along with pricey cocktails. But it can be tricky for most tourists to find. "We're a five-minute walk from Times Square, but most visitors don't walk down this way, and even when they do, they don't look up and realize we're here," says David Feit, the Sky Room's marketing director. "With Foursquare, we're able to reach people nearby who are looking for something unique to do. And most importantly, since its based on check-ins, we only pay for reaching customers who actually walk through the door."

Foursquare has struggled in the last year to grow its user base and revenue. It couldn't raise a new round of venture capital at an attractive valuation, so took on $41 million in debt instead. Rumors have swirled that it's in talks with Microsoft, Yahoo, and Apple about a potential acquisition, investment, or data- sharing deal. But in the meantime it keeps plugging away at expanding its own offerings, and today it takes a big step, rolling out self-service ads for small business, allowing any company to create an ad without the help of Foursquare's sales team. It tested the product over the last year with a few hundred companies, like the Sky Room, and so far the results have been positive. 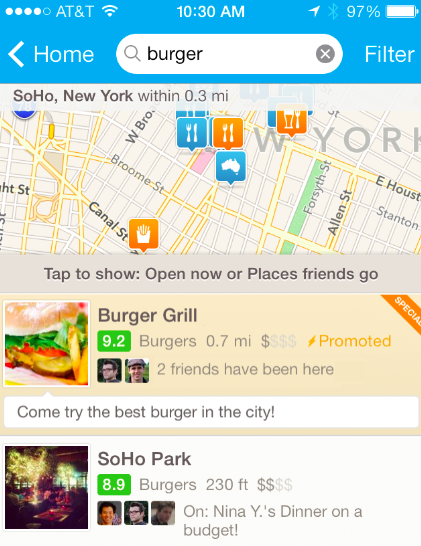 "We use ads from Facebook, Twitter, and Google," says Feit. "The major difference with Foursquare is that it allows you to track how much foot traffic your ads are driving in a way nobody else can." Users who open the "explore" section of the Foursquare app will see promoted locations nearby. The business placing the ads can set a cap for how much they want to spend each month and pay each time someone who saw their ad checks in to their venue. "Some people see the ad and come by, but don't check in. Some people check in, but they also bring five friends. For us it's been a great value," says Feit.

"We only pay for reaching customers who actually walk through the door."

The question now is how well the business can really scale. "We feel this can be really big," says Noah Weiss, the product manager at Foursquare in charge of this effort. "We've had over a million ad impressions during the private beta, and that was with a very small group of hand-picked customers. Once we roll this out to the more than 1.5 million businesses who have claimed their venue on Foursquare, we think it can be a really significant driver of revenue."

But even Weiss admits that the product works best in big cities, where there is a concentration of foot traffic to drive. "We're focusing right now on expanding the customer base here in New York and in San Francisco," where Foursquare has its West Coast headquarters. "We've set very aggressive goals for revenue in 2013 and so far we've surpassed those goals in every quarter."