New images of two unannounced Sony cameras suggest the company is preparing to expand its full-frame mirrorless camera lineup in the near future. Digicame-Info has posted apparent promotional photos of both the A7 and A7r. The cameras combine design traits of Sony's NEX cameras with those of slightly larger DSLRs, though the overall form factor seems to be fairly compact. There's a built-in electronic viewfinder from the looks of it, meaning buyers won't have to cough up extra as was the case with the RX1. The exposure and mode controls of the RX1 have also been carried over — at least from what we can see of the camera's upper portion. 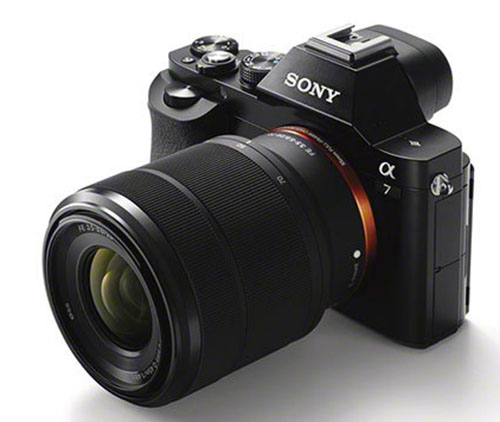 In terms of specifications, Sony Alpha Rumors claims that the A7 will feature a 24-megapixel sensor, with the A7r kicking that number up to 36 megapixels. The A7r is also rumored to ditch its anti-aliasing filter, a component manufacturers are increasingly leaving out in high-end cameras to achieve maximum sharpness. Sony Alpha Rumors says the user interface and menu system on both cameras will be closer to Sony's RX line than its NEX cameras, though it will of course include focus peaking and other features that photographers have come to expect from Sony. The weather-sealed cameras will start at $1,998 for an A7 kit that comes with a 28-70mm f/3.5-5.6 kit lens with optical image stabilization. The A7r will reportedly run $2,198 for body alone, and consumers will have a variety of Sony lenses to choose from within the next 12 months. Both models could launch as early as this month.