Director of ‘The Fifth Estate’ responds to Julian Assange's attacks: ‘He just flat-out makes things up’

Director of ‘The Fifth Estate’ responds to Julian Assange's attacks: ‘He just flat-out makes things up’

Director Bill Condon has shown the ability to move between genres with ease, shifting from the the likes of Gods and Monsters and Kinsey to Dreamgirls and the two-part Twilight closer Breaking Dawn. For his latest film, he’s taking on another project inspired by real-life events: the WikiLeaks origin story The Fifth Estate.

The movie arrives amidst a storm of criticism from WikiLeaks itself, with the organization publishing script reviews and even suggesting alternative viewing options for UK filmgoers. We spoke with the director about the intense reaction, what it says about Julian Assange, and how whistleblowers like Edward Snowden are continuing the conversation that WikiLeaks started.

WikiLeaks and Julian Assange have been extremely critical of movies about the organization’s history, whether it’s The Fifth Estate or Alex Gibney’s documentary We Steal Secrets. Were you anticipating that kind of criticism when you signed on to this movie?

Absolutely. It already had happened because of the source material, which he takes exception to. But he takes exception to anything, honestly, written about him that isn’t completely laudatory. He’s very thin-skinned and he very much — in a naive way — tries to control what people say about him. There’s something strange and adolescent about it, you know? He’s like the teenager who has to prove he was right about everything.

"He's like the teenager who has to prove he was right about everything."

It’s an odd reaction, because I found the film to be very supportive of the WikiLeaks mission itself, and citizen journalism in general. It almost plays as a call to arms.

I agree! But that’s the thing, that he conflates WikiLeaks and Julian Assange. He thinks they’re one and the same. That’s completely who he is. He is, in some basic way, unsocialized, isn’t he? And because he had to do it alone for so long, and had to really survive on his own for so long … When you realize that he’s hardly ever had a roof over his head that he could call his own — and that continues to this very day — it makes sense that somebody like that, when it actually turns into something bigger than him, can’t make the distinction anymore. That was his big argument to Benedict when we were shooting. "Don’t do this because all this stuff about whether I dye my hair or not gets in the way of the message," and it’s sort of not true. He’s gotten in the way of the message to a great degree.

The movie portrays Assange as someone whose ego becomes more important than the greater good that the organization is doing. When he has those conversations with Benedict, or when WikiLeaks comes out with its review of the script, do you feel like he’s making the movie’s case for you in a way?

"He just flat-out makes things up."

Well, that’s interesting. I know what you mean, and I know a lot of people have said that. But it’s a little frustrating, too, because as with the Gibney thing he releases this list of ways in which the movie is not true. And we have our own response to that. People have been saying, "No, no, this is fine. Hang back and don’t engage," but it is frustrating. Because he just flat-out makes things up. But I hope what you’re saying is right. I think what’s interesting is that it’s just a different target all the time, but it’s the same message: that nobody’s telling the truth about me. 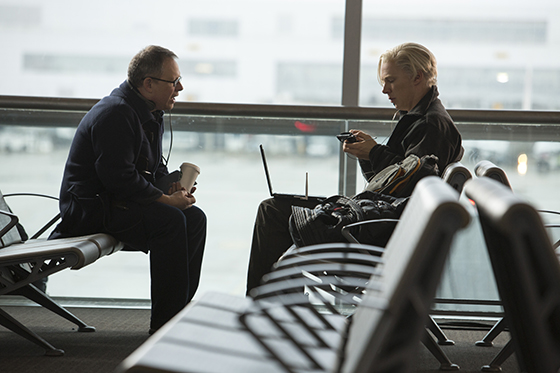 Revealing secrets by publishing classified documents came up again this year when Edward Snowden revealed the existence of PRISM. Where do you think this open spread of information is taking us?

Well it’s such an unfinished story. But I have to say, Snowden’s been interesting in that I think he’s learned from some of Assange’s mistakes. According to people I read and trust, like [The Guardian’s editor, Alan Rusbridger], he’s been extremely responsible in withholding anything that might cause any kind of damage to people in the field, for example. So I feel as though Julian is the pioneer, but what’s hopeful about the Snowden thing is that he is proceeding in a more responsible way.

I guess you can question the idea that he exposed these secrets, and stole them in some way, you could argue. At the same time, he has started a conversation that is now moving into Congress. He’s been extraordinarily successful already, because it’s something that wouldn’t have happened without those revelations. Whether what he did turned out to have been more valuable than keeping the secret, I don’t think we’ll know for a long time.

I get the sense from the movie that you’re personally in support of this way of exposing truth, and the importance of it. Is that accurate?

That nuance is something that can get lost in the discussion. It’s easy to think of it a binary decision, but I’d argue that it’s gray.

It is! That’s why journalists have always been — that’s what the Fourth Estate [the press] is meant to do. And, you know, his [Assange’s] challenge will be, "Well, they’ve kind of abrogated that to a degree by not pushing for more transparency," hence we need people like him. That may be true.

There’s a moment in the film where WikiLeaks really starts to take off, and you have this montage that seems geared towards exciting the audience about the work the organization is doing. Are you hoping to inspire people to get into journalism or get involved themselves?

Yeah! I think that’s true. I do think there’s something very inspiring about the idea. And again, how complicated is Arab Spring? How many decades before we know the implications of all of that? But still, you can’t help but feel as if it’s moving in the right direction.

The Fifth Estate opens in the US on Friday, October 18th.