Two-way street: electric cars of the future could give power back to the grid

Two-way street: electric cars of the future could give power back to the grid

On September 23rd, the city of Palo Alto, California decided to embrace the electric car. Inspired by one resident who fought to install a public charging station, the city council voted to mandate that every new single-family home be wired to support EV chargers. That might be good news for Palo Alto's wealthy, environmentally conscious populace — not to mention Tesla Motors, which is based there. But if Palo Alto eventually becomes an EV mecca where thousands upon thousands of battery-equipped vehicles need to plug in and charge every evening, what does that do to the grid? If electric vehicles are truly the future, can the country sustain tens or hundreds of millions of them without changing the way we deliver electricity?

Intriguingly, it looks like those cars aren't necessarily the problem they seem. Someday, they could actually be the solution to making the electrical grid more reliable than ever. 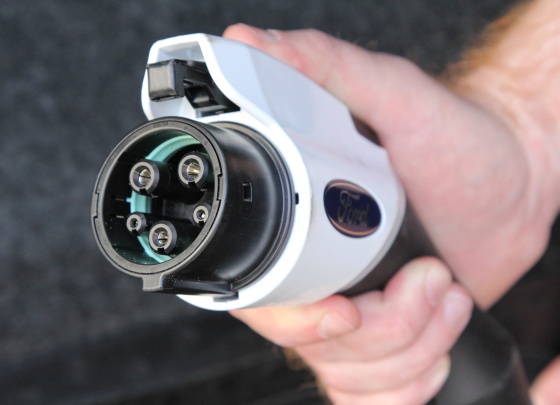 For well over a decade, Professor Willett Kempton at the University of Delaware has been studying and developing a concept called Vehicle to Grid (V2G). If you allow electricity to flow both in and out of vehicles, the idea goes, the grid can harness that power to solve all sorts of issues. It's only just this year that his group has been able to show a complete system in action, but the result is profound. In April, harnessing the power of 15 electric Mini Coopers, they demonstrated the ability to make $5 a day — over $1,800 per year — just by slightly charging and discharging a car's battery at the right time to help balance the grid. Needless to say, that's quite a bit of money, perhaps even enough to offset the difference in price between electric and gas vehicles.

Why so much cash? Our electrical grid needs to constantly balance supply with demand. In order to maintain the 60-cycle-per-second frequency of US electricity so that dependent devices stay stable — among other reasons — energy suppliers have to maintain gas- and coal-fired generators which they can turn on and off as needed. Those come at a cost: utilities have to pay around the clock to maintain those generators, and again when they fire them up. But it can be pretty slow, inefficient, and even polluting to spin up generators just for short bursts, and so government regulators have decided to prioritize faster, cleaner energy storage devices. That's where electric vehicles come in.

"Essentially you're able to use a battery to generate two value streams."

"All you have to do is provide the same service slightly better or slightly cheaper, and you get the business," says Tom Gage. He's the CEO of EV Grid, the company he co-founded in 2007 when he realized that the proliferation of electric vehicles was inevitable and their batteries could be put to work. Previously, Gage was CEO of AC Propulsion, the company which built the car that inspired the Tesla Roadster, and which worked with Professor Kempton's group to develop the V2G concept for years. It's only recently, Gage says, that technology and policy has advanced far enough to make batteries a viable option for the grid. 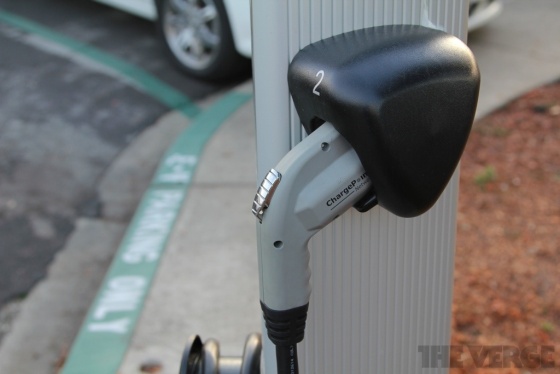 Yet Gage admits that the opportunity still isn't quite here. In order to provide the service, vehicles need to be equipped with a bidirectional charger, something automakers don't include. Electricity has be converted between AC and DC in both directions, at a significant loss. Deals have to be struck with utilities or energy providers to aggregate the batteries into large enough units to be sold, and there needs to be a way to tell cars when to consume energy and when to release their charge.

"We used to joke that we were taking on two of the biggest industries in the world."

To some degree, it's an uphill battle. Utilities "feel very threatened by V2G for the most part," says Gage, explaining that they'd prefer to pay for their own battery installations and make up the difference by raising rates rather than conceding control. "At AC Propulsion, we used to joke that we were taking on two of the biggest industries in the world, the auto industry and the oil industry... and now we've added the utility business as well, because that just wasn't enough of a challenge," he adds, wryly.

And then there's the little matter of convincing EV owners that range anxiety won't set in.

"Oh, you're going to be taking energy out of my battery and it may not be there when I need it... it'll wear out my battery more... that's what everybody thinks of first when they hear the idea," says Alec Brooks, CTO of AeroVironment's EV charger business and another AC Propulsion vet. While Gage, Brooks, and other experts believe that some forms of V2G wouldn't impact battery life, those same experts conceded that they don't know for sure. Nobody has comprehensively studied the matter yet, and some automakers are understandably worried. 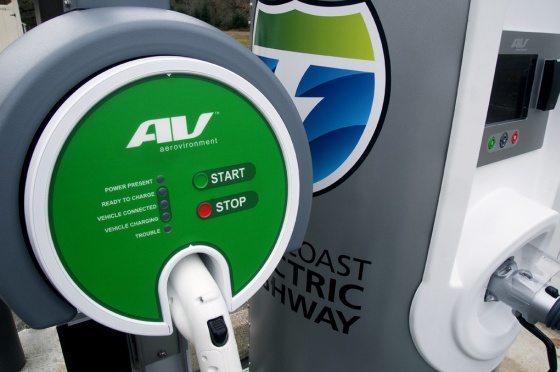 Brooks might have an easier solution. With "smart charging," sometimes known as V1G, there's no need for special hardware and no need to drain the battery: the charger simply stops charging whenever the grid needs a lighter load, and starts charging when there's enough headroom. V1G chargers might not even need to communicate with the grid: a new unit built by AeroVironment can automatically compensate for changes in the grid's frequency in less than a second. The main thing is that chargers need to be fast, so that even if it takes four times as long to charge your battery due to all the stops and starts, it's still fully topped off by morning.

Fast charging is a must

Yet V1G has its cons. Because you aren't taking any energy out of the battery, you might need 10 times as many cars to have the same impact. That means fewer dollars. "It's something where the value that you create could give you a discount on electricity, but not pay for your car," says Brooks. You also can't put that electricity back into the grid. That's why some see V1G as merely a stepping stone on the way to the real thing. But the truth is that most people probably won't see even much money even from V2G. Experts seem to agree that the market for balancing the grid's frequency could be saturated with just a few million electric vehicles, and subsequent cars will earn less and less. So what's the point of these technologies? 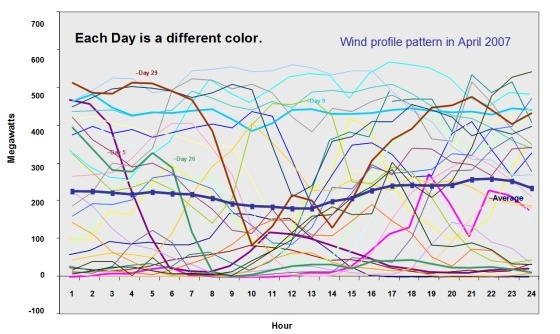 It comes back to the original V2G inspiration: wind and solar power. Solar power peaks in the middle of the day, and wind power picks up at night, but neither are predictable. That's a problem for the grid. Energy needs to be consumed at the same time it's produced, because we don't have many places to store it. Every day, wind energy producers are told to shut off their turbines because they're simply producing too much unexpected power, Brooks explains. But if there were millions of batteries just sitting around every evening — say, in the world's electric vehicles — there'd be a place for that renewable energy.

And if those cars could communicate and intelligently share that energy with one another, they could keep the grid from being affected if too many EV owners try to charge at once. "It's like a software program; once you get it up and running, adding more users just makes it better for everybody," explains Sven Thesen, an EV industry insider — who just so happens to be the same Palo Alto resident who inspired the city council.

Palo Alto shouldn't expect to take advantage of these technologies anytime soon. Though both V1G and V2G are in a number of trials right now, the industry is starting small. "Rather than take on the whole utility industry and grid operating behemoth, it's easiest to search out niches where you think you can create benefit," says Gage.

The US Department of Defense might lead the way: after discovering that V2G could help shave $200 off the monthly lease price of an electric vehicle, it kicked off a sizable pilot program at six military bases (PDF), with an eye to potentially convert its entire 200,000-vehicle fleet. 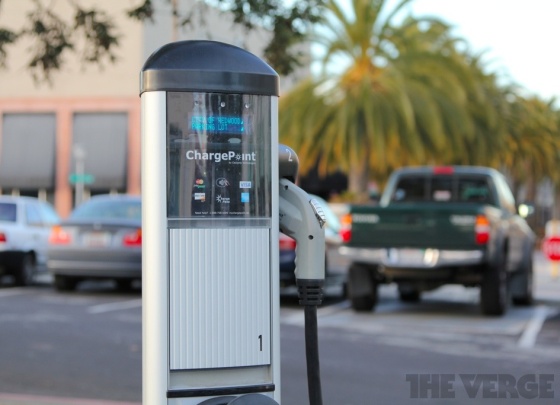 Still, Palo Alto residents might be closer than you'd think. ChargePoint, which maintains 15 public EV chargers in the city — and many more across the country and the world — says that every one of its charging stations supports bidirectional charging, and would only need an over-the-air software update to get started. "Today, we don't see any applications for vehicle to grid, but we're prepared for it if the automakers move in that direction," says ChargePoint CTO Richard Lowenthal.

He's not convinced they will, though. "Right now, I think they're trying to build consumer confidence."

"They're trying not to make EV ownership any more confusing than it already is."