What if Google Now was made of the icons on your home screen?

"We want to connect people to personalized information at the moment it’s useful," reads the mission statement of Aviate, a replacement launcher for Android available today in private beta. It sounds almost exactly like the tagline of Google Now, and that’s no coincidence — Aviate co-founders Paul Montoy-Wilson and William Choi used to work for Google. While Montoy-Wilson worked for Google Play and Choi worked on search, the two had of course heard of Google Now, their employer’s best effort at predicting what information you’ll need next. But, the duo thought they could do a better job at it.

To the founders of Aviate, you shouldn’t even need to open Google Now. The apps and information you need should already be sitting on your home screen as soon as you need them. "What is the right product to bring contextual info to users?" asks Montoy-Wilson. "We decided it’s not an app with push notifications. It needs to live and breathe within the context of your phone — within the context of the experience where you access all of your content."

When you wake up, Aviate shows your next few appointments, the weather, and an icon for Twitter

Aviate uses a variety of factors including the time of day and your location to determine what you’re likely doing, and provide the appropriate apps, buttons, and links for that moment. For example, when you wake up and unlock your phone, Aviate provides a widget filled with your next few appointments, the weather, and even an icon for Twitter, since you like to scan news headlines in the morning. On the way to work, Aviate pops up Waze, Pandora, and Gas Buddy. When you head out to lunch, your home screen adapts itself to the restaurant you’re in, providing photos and tips from Foursquare, as well as the option to check in. As you walk to your car after happy hour that evening, Aviate pops up quick links to get directions home and check on traffic. When you plug in your headphones for an evening walk, your music apps appear. And finally, as you slump into bed after a long day, your home screen includes a new "Set Alarm" button, and a link to your Kindle app.

Whereas Google Now provides the raw information you might need at any given moment, such as the weather or a boarding pass, Aviate hopes to also provide the apps you need. Google may envision a future where the world runs on Chrome apps inside a web browser, but today, apps are the way we do everything on our phones. And don’t worry, you can pick up to 10 apps to stick to the bottom of your home screen — and Aviate expects the scheme to work for most people. Where virtually every other launcher replacement for Android skews towards power users, Aviate is meant to be used by everyone.

"When looking at users’ home screens, you see a common theme: people’s phones are a mess, whether they use iPhone or Android. Everyone has pages and pages of apps," says Montoy-Wilson. "It’s on the user to customize and curate their device, so the first thing we’re doing is simplifying the phone experience." When you first set up Aviate, the app checks to see which apps you use most, and sticks them on your home screen. It then intelligently groups your apps into its different scenarios like Home and Work, which it calls "Spaces." A new bar adorns the top of your home screen which guesses at which Space you’re in, including surrounding bars and restaurants. By swiping down, you can hop into the Space. By swiping to the left, you can view automatically sorted Collections of apps, such as News, Weather, and Work. Swiping one page further opens a Windows Phone-esque list view of all your apps. There’s no search bar, however — you’ll need to scroll down or tap a letter in the right-side A–Z bar. Aviate does include support for most Android widgets.

Aviate even uses the widgets you choose to see how it could better customize its default Spaces for new users. "Let’s say everybody puts the music widget into the 'Going Somewhere' Space — that would really help us," says Mark Daiss, a co-founder at Aviate. "In our beta, we’ve nailed the main Spaces in our daily lives, but we want to grow the Spaces list," says Montoy-Wilson. Aviate recently added a workout Space, for example, which pops up fitness apps when you’re at the gym. If you’ve been paying attention, you’ll notice that people aren’t a big part of Aviate — for now, at least. "People aren’t central to this experience," says Montoy-Wilson in a jab at Facebook Home, another lock / home screen replacement for Android. "We want to connect people to the thing they want to do right when they want to do it." Someday soon, one such thing could be a quick-access button for texting your spouse, but not in version 1.0. 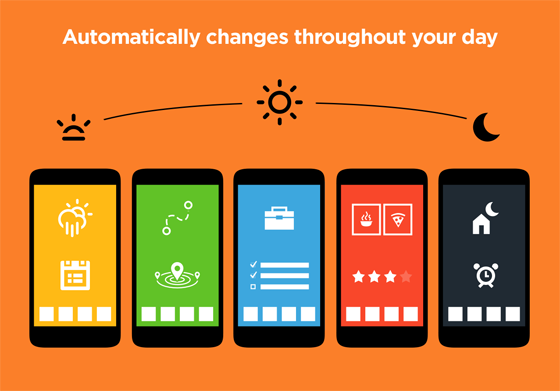 The biggest challenge for Aviate, says Daiss, is fitting in with the habits people already have. "It’s a really tricky balance — home screens with dynamic content," he says. "You touch your home screen 50–100 times per day, so many habits are built into your home screen whether you recognize it or not. That’s why Aviate still lets users pin 10 apps to their home screen: there are some apps, like Instagram, that you might use all day and don’t fit into one specific Space.

The real question for Aviate is whether it can fit into the lives of everyday Android users. "Launcher" isn’t exactly a household term, and Aviate will need to market itself as an experience, not as an app. Aviate isn’t going to compete with Cyanogen Mod, and that’s okay, according to its founders. While Aviate begins today on Android in private beta, Daiss says that what the company has really been doing is rethinking the idea of a mobile computer from the ground up. Android is, for now, the only platform that allowed them to do it, since it offers users the ability to completely revamp their home screens. "We’re building an Android app but we’re not an Android company," says Montoy-Wilson. "This could take a lot of different forms."

"In 10 years, are our phones always changing?" asks Daiss. He seems to say that perhaps someday in the future, our phones won’t have buttons and panes and pages to swipe through, but instead present the information we need along with a few buttons for how to act on that information. If you’re in a Starbucks, a custom Space could pop up offering you the option to order your drink in advance — which presents some interesting monetization ideas. If you're at an airport, Aviate could pop up your boarding pass.

Aviate is the promise of Google Now, but in a way that feels more hardwired into the device itself. "Google Now focuses on an engine for a Google data set," says Montoy-Wilson. "As a startup we have the flexibility to rethink the problem and build it exactly as we believe users want it. If we’re your home screen, which you use 50–100 times per day, we could be the interface that you interact with more than any other interface in your life."